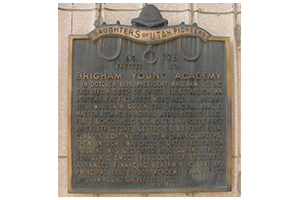 The Academy Building was the first building specifically built to house the Brigham Young Academy. Previously the Academy had been housed in the Lewis building which burned to the ground on January 27, 1884. The decision was made to rebuild in a new location.

The following appeared in the Salt Lake Tribune when the site for the building had been determined:

"President Taylor and others were riding around the town to-day, looking up a suitable site for the erection of the new building of the Brigham Young Academy. It is understood that the location has been determined upon, it being the Lewis block, on J street, a few blocks north of the First National Bank. The excavation will begin this next week and the material be hauled for the foundation immediately. The brick of the old ruin will be used again in the new.

"This week appeals have been made to the young men of Utah county to contribute their labor and teams for the unskilled part of the work. The contribution list is adding up to quite an amount, and is expected soon to reach the requisite sum.

"In the meantime the Academy is flourishing in its present quarters, and the people are determined it shall not die out, but rise Phoenix-like out of the ashes and be a better and more commodious institution." 1"Provo Points," Salt Lake Herald, 9 Mar 1884, p. 9

The architect was Don Carlos Young, a son of Brigham Young. Young's design was based on designs by Karl G. Maeser. It was located on J Street (later dubbed "Academy Avenue" and then "University Avenue"). The building was dedicated January 4, 1892 and was at that time one of the largest of its kind in the Intermountain West. It was designed to accomodate 1,000 students.

The building was constructed of brick and trimmed in Kayune stone. 168' deep, 188' wide, and 50' high. Over the entrance was the inscription "B. Y. Academy 1891" in gray sandstone. There were two floors, an attic and a basement. From the beginning the building had electric lights powered with electricity from A. O. Smoot's sawmill two blocks to the west; however, there were no inside toilets for the first 10 years. The building was heated in part from forced air over steam radiators and in part by coal stoves.

"The Provo Foundry & Machine company has succeeded in casting two of the longest columns ever turned out in Provo. They are a trifle over twenty-three feet in length, and weigh over 1,500 pounds. They are to be used in the third story of the Academy. Preparations are being made for the casting of two more. A system of core-making, new to Provo, has been introduced. Formerly cores for columns were made with a sand--something like plastering sand, the cores have to be made in pieces; but with these long columns, loam-cores were used instead of common sand, and the result is that these cores can stand a greater pressure than others, and with less danger of 'blowing' as a moulder would say. The foundry has an order for six round columns and two square ones, for the Young Men's Co-op., at Spanish Fork." 2 The Dispatch, 5 Aug 1891, p. 4.

A variety of classes were taught in the building, such as chemistry, typewriting, geology, and art.

In 1898 the building was renamed the "High School Building".

In 1912 a bell was purchased and installed in the belfry. Until this time a triangle hanging in one of the main halls was struck to signal class periods.

In 1919, following the demolition of the old Tabernacle, the bell from the old Tabernacle was installed in the Academy/High School building. This bell was a much better bell, having been made of nickel and cast by the McShane Bell Foundry of Baltimore in 1887.

Also in 1922 "Leadership Week" began (renamed "Education Week" in 1962). Leadership Week was held in the Academy/Education building until the Joseph Smith Building on the upper campus was completed in 1941.

In 1949 the Academy Bell was pounded with hammers causing it to crack.

In 1960 the wooden staircases were replaced with new ones of steel & concrete.

In 1968 BYU stopped using the building, closing the Brigham Young High School and the Elementary School.