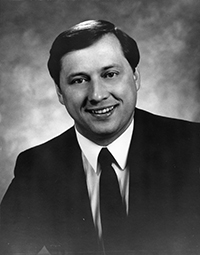 James E. Ferguson was born in Effingham, Illinois on February 16, 1946. His parents, Pleasant Lee Ferguson and Jennie Waunita Jones, moved to the small town of Robinson, Illinois two weeks after their son was born. Ferguson grew up there, attended the elementary school, and in 1964 graduated from Robinson High School. His early interest in politics can be seen in his serving on the seventh-grade student council and also in several high school student government positions. 1James E. Ferguson, interview by David M. Walden, Provo, Utah, 20 Jul 1990.

Ferguson's interest in the West originated from a congressional appointment to the Air Force Academy in Colorado Springs. During the year before he was to begin at the academy, he attended Eastern Illinois University. After studying for an Eastern Illinois debate team, Ferguson concluded he did not support the Vietnam War and therefore ignored the academy appointment. However, he realized he liked the West on a trip to Colorado Springs. Thus he attended BYU from 1966 to 1969, when he received a B.A. in psychology. Although not a member of the dominant Mormon faith, Ferguson had a good experience at BYU. While an undergraduate he married an Illinois girl and had two children. 2Ferguson interview 1990. While serving as Provo's mayor, Ferguson was a member of the Rock Canyon Assembly of God.

Ferguson's involvement in BYU's student association, ASBYU, was the reason he did not return home as initially planned. As an ASBYU vice-president, he made contacts in the community which led to job opportunities after graduation. 3Ferguson interview 1990. Over the next several years he worked as an account executive, Job Corps counselor, and was the manager and sole proprietor of Medexam, which provided physical exams and other basic tests, such as X-rays and EKGs. He also participated in the Provo Chamber of Commerce and the Utah Valley Industrial Development Association. 4James E. Ferguson, personal vita.

In November 1977 Ferguson won an upset victory as Provo mayor over the incumbent Russell D. Grange. In November 1981 he defeated challenger M. Wayne Hillier by a more than two-to-one margin and thus served a second term in office. He lost his bid for a third term in the 1985 election to Joe Jenkins. 5Jack Emmerson, "Meecham Elected to Commission," Daily Herald, 9 Nov 1977; Dave Heylen, "Ferguson Wins Task of Guilding Provo's Change," Daily Herald, 4 Nov 1981, 1-2.

One of the most significant developments in Ferguson's administrations was the change from the commission form of city government to the council form, effective in January 1982. With the attitude that the character of elected officials is more important than the form of government, Ferguson did not support either form in the debates over their merits. However, he admitted the change did prevent abuses in the commission form that had occurred in Salt Lake City. 6Ferguson interview 1990; Dorothy Knoell, "Citizens Tell Good and Bad of Provo Government," Daily Herald, 5 Mar 1981; Dorothy Knoell, "Dixon, Ballif Tell Pros, Cons of Changing Government," Daily Herald, 26 Apr 1981.

To combat a negative self-image of some Provoans due in part to underdeveloped downtown businesses, Ferguson worked with a public relations firm on the "Provo's Got It, Get It" campaign, using the saying on posters and other places. He considered the slogan at least partially successful in building self-confidence in the community. 7Gina Caldwell, "Provo's Got It. Got What? Ferguson, for One Thing," The Daily Universe, 18 Nov 1982; Ferguson interview 1990.

One of the assets of Provo's downtown is its historic buildings. Working with others, such as Craig Call, Ferguson supported the renovation of several old buildings near the Center Street-University Avenue intersection. On September 15, 1982 investors in Hawaii bought the Knight Block and committed to renovate it. On November 7, 1983, fifteen downtown businesses had a formal ribbon cutting ceremony for the project called Provo Town Square. 8Deseret News, 7 Nov 1983. Several new businesses now operate in these refurbished structures.

Several other milestones occurred in the Ferguson era. In 1981 the city bought 6.25 percent of the UP&L Hunter Power Plant. In 1982 the council decided not to purchase the Rigby Coal Mine after considerable debate and studies were completed. 9Kris Radish, "Provo Says $50,000 Well-Spent in Deciding Not to Buy Coal Mine," Deseret News, 15 Dec 1982, B-1. The Provo Development Company was approved by the Small Business Administration to administer loans to local businesses. Environmental issues became increasingly important. Ferguson fought in vain for district heating from burning municipal wastes. The city worked with the developers of Heritage Mountain Ski Resort, but they lacked financing to move ahead. A new library was proposed for the Academy Square, but the council wanted a new building, which opened on West Center Street next to the City Center. Ferguson was instrumental in promoting federal legislation which was helpful in the origin of the Excelsior Hotel. 10"Provo Offers Small Business Loans," Daily Herald, 7 Apr 1982.

During his time as mayor, Ferguson was quite active in civic affairs involving cities throughout the country. From 1978 to 1986 he served on several committees of the U.S. Conference of Mayors. He participated in the National League of Cities from 1982 to 1985.

From February 1986 to February 1989 Ferguson was the general manager of the Excelsior Hotel. Since then he has worked as a real estate agent for ERA Cascade and has been the executive director for the Brigham Young Academy Foundation.