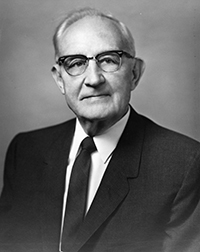 Lloyd L. Cullimore, M.D., was born on December 10, 1895 in Lindon, Utah, to Albert and Luella Keetch Cullimore. A descendent of English immigrants to Utah, Cullimore grew up on a farm near Lindon. He served an LDS mission in the South and earned a B.S. degree at the University of Utah. He married Odessa Allred in 1920 in the Salt Lake Temple. After graduating from George Washington University Medical School in Washington, D.C. in 1925, Cullimore said he had "about $2 and two degrees." He had a great offer to be in a lucrative medical partnership in Washington, D.C., but he turned down what he called a "gold mine" to return to the West to raise his family. 1Lloyd L. Cullimore, interview by Hollis Scott, 28 Jun 1970, BYU Archives.

Under the supervision of Dr. Theodore B. Beatty of the Utah State Health Department, Dr. Cullimore was assigned to the Shepherd-Towner Infancy Maternal Welfare Program. He moved to Provo in that capacity, but in the summer of 1927 he taught his first class at BYU. In January 1928 he opened his private practice in Provo, where he became a well-known general practitioner and made numerous contributions to the medical profession and most importantly, his patients. For many years he was city physician. At BYU he was a founder of the student health program. He donated his time to see BYU students, first at the Lower Campus and then later at the McDonald Health Center. He taught health classes and served as physician for several athletic teams.

He continued to serve BYU until 1949, when his private practice in Provo demanded more of his time. He delivered many babies at Crane Maternity Home before Utah Valley Hospital began. He went East to help negotiate funding for the new community hospital which opened in 1939. The first baby born at Utah Valley Hospital was delivered by Dr. Lloyd L. Cullimore.

Dr. Cullimore was a key figure in the start of the Utah County alcohol rehabilitation program, which initially was rather controversial. Some local LDS bishops felt the center was unneeded and that Cullimore was going against his own faith. Cullimore explained in a newspaper article that his goal was to help people, regardless of their religion. 2Elaine Englehardt, "Lloyd L. Cullimore," Daily Herald, date unknown, scrapbook clipping in possession of Mrs. Georgia Faux of Provo.

Journalist Theron H. Luke called Dr. Cullimore "the last of a vanishing breed--the old-time family doctor." He referred to Cullimore making house calls, even if necessary in the middle of the night. He charged little for his medical services and would waive the fee for those unable to pay. He became a person's friend as well as his doctor. 3Theron H. Luke, "90-Year-Old Provo Doctor's the Last of a Vanishing Breed," Deseret News, 24 Feb 1986.

Cullimore's goal to help others continued to guide him as a civil servant. When Dr. Stewart Grow first approached him about running for the city council, Cullimore did not think he was serious. But he did run and was elected in the fall of 1957. In 1959 the council chose him to be mayor. He admitted in an interview that his medical practice was "practically ruined" by his political involvement. He received only $50 per month as mayor, while his office expenses continued. 4Lloyd L. Cullimore, interview by Kay Alta Haynes, 23 and 27 February 1974, Provo, Utah, BYU Archives, transcript, 34.

During Cullimore's administration, he had to deal with political controversies that sometimes became quite heated. For example, a sales tax created resentment against Provo from residents in other Utah County communities. A strike by municipal power plant workers influenced some people to consider getting city power from Utah Power and Light. There was tension between BYU and the city government. But probably the most bitter conflict was the movement to repeal the city council-manager charter that had been implemented in January 1956. The "vile things that were said and done" over this issue was what distressed Cullimore the most.

He and a city manager received vicious and threatening phone calls. He tried to ignore these personal attacks and act friendly toward political enemies. In spite of such problems during his civic service, he enjoyed his time in office, for he met many wonderful people and had the opportunity to represent the city overseas. 5 Cullimore interview, 1974, 21-32, quote from 26.

Cullimore's contributions also included twice being president of the Provo Chamber of Commerce, and serving in the LDS church as a teacher, Sunday School superintendent, bishop's counselor, and stake high councilman. He was a member of Rotary International and was on the board of directors for Utah Technical College in Provo. His wife Odessa was noted for her work in church callings, the Women's Division of the Provo Chamber of Commerce, and the Utah Legislature. For their many years of service, the Cullimores were honored with the Utah-Idaho District Sertoma International Service to Mankind Award for 1977-1978. 7Allred Heritage, 28; "Cullimores Win District Award," clipping from scrapbook of Georgia Faux.

When Dr. Cullimore died on September 24, 1986 at age 90, Provo lost one of it's most distinguished citizens. He was buried in the Provo City Cemetery. In 1990 his daughter Mrs. Eugene (Georgia) Faux still lived in Provo and his grandson Gregoy Faux lived at the Cullimore family home at 740 North 300 East. 8Georgia Faux, personal communication with David M. Walden, 24 Jul 1990, Provo, Utah.