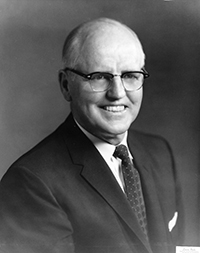 G. Marion Hinckley was born in Provo on March 1, 1909, the twelfth of 13 children born to Edwin Smith Hinckley and Adeline Henry. Marion grew up in western Provo on the Hinckley Farm, purchased by his father in 1898. He graduated from Provo High School in 1929 and took classes at BYU. Farming and raising dairy cows has been his occupation since he took over the family farm in 1930. "Farming may not be the easiest way to make a living, but it is the best way," said Hinckley. 1G. Marion Hinckley, interview by David M. Walden, 26 Sep 1990, Provo, Utah; "Biographical Sketch of George Marion Hinckley," typescript, n.d.

Hinckley's civic service often concerned agriculture. For example, he served in district and state soil conservation programs. In 1957 the Timpanogos Soil Conservation District presented him with a Distinguished Service Award. He also served on the Utah County Board of Health Advisory Committee for Milk Producers and Sanitarians. U.S. Secretary of Agriculture Freeman appointed Hinckley to the National Milk Advisory Committee. In 1963 the Utah Association Future Farmers of America honored him as Utah's Farm Leader of the Year. 2"Biographical Sketch."

In the fall of 1955 Hinckley was elected to the City Council and served in that capacity for two years. Then in 1958 the council chose him to be mayor and Stella Oaks assistant mayor. However, he resigned to run for Utah County commissioner in the fall of 1958. Four of his ten years on the commission were as its chairman. His term on the City-County Board of Health spanned both his municipal and county positions. Like his father before him, Hinckley was a staunch Democrat. Party affiliation was not important in getting elected mayor, but was significant in his election to the county commission. 3Hinckley interview 1990.

One key development during the Hinckley administration was the construction of access ramps between Center Street and Interstate 15. Those ramps improved transportation between farming areas in western Provo and other parts of Utah County. 4Hinckley interview 1990.

Hinckley was mayor during the few years Provo had a council-manager form of government. He felt the city made progress in those years and that form would have continued if the personality clashes between one of the managers and the city council had not happened. 5Hinckley interview 1990. (See the article on Mayor Lloyd Cullimore for more on this controversy).

While a county commissioner, Hinckley was the head of the Wasatch Front Tax Study Committee. He and others in that organization thought the tax assessment methods of the Utah State Tax Commission discriminated against the county. 6"Hinckley in the Race for Provo Mayor," Daily Herald, 19 Sep 1969, 1, 4.

In the fall of 1969 Hinckley entered another race for Provo mayor, after a group of citizens led by Charles E. Peterson, John W. Manning, and Dr. Richard Call sponsored a petition drive requesting his candidacy. 7"Hinckely in the Race for Provo Mayor." However, incumbent Mayor Verl G. Dixon won re-election.

Hinckley remained active in community service after his days as a city council member and mayor. His volunteer work in Scouting earned him an award from the Provo Rotary Club in 1969. For 20 years of service to the Central Utah Water Conservancy District, he received a Resolution of Appreciation on April 11, 1985. Part of that time he was on the Board of Directors of the Central Utah Project. From approximately 1956 to 1972 he was a board member of Beneficial Life Insurance Company. The First Presidency appointed him to the Board of Directors of the Elberta Project, which was designed in the late 1960s to change a church welfare farm in Southwestern Utah County to a private enterprise on the tax rolls. Other community activities included 1) board member of Utah Valley Hospital, 2) member of the BYU Cougar Club, and 3) Board of Investors of the Edwin Smith Hinckley Scholarship Fund to aid BYU students.8Hinckley interview 1990; "Biographical Sketch." His brother, Robert Henry Hinckley (1891-1988), also was well known in politics and civic service. In the 1930s Robert H. Hinckley was appointed western regional director of the Federal Emergency Relief Administration and assistant administrator of the Works Progress Administration. Later he became chairman of the Civil Aeronautics Authority. The Hinckley Institute of Politics at the University of Utah was named for Robert H. Hinckley. See Politics at the Hinckley Institute, summer 1988, for more on the life of Robert H. Hinckley and the programs of the Hinckley Institute.

Church and family remained a central concern through the years. In 1945 he began a six-and-a-half year term as bishop of the Sunset Ward. For three years he served on the high council of the West Utah Stake. From September 1955 to 1972 he was the president of the West Utah Stake. While part of the LDS Regional Welfare Program for 17 years, he directed the Bishop's Storehouse and Deseret Industries in Provo. In 1972 he began a three-year term as president of the Colorado-New Mexico Mission. Since 1976 he has been a sealer in the Provo Temple. 9"Biographical Sketch."

In 1933 Hinckley married Nita Johnson in the Salt Lake Temple. They had five children: Thomas Kent, Phillip Warren, Nanette, John Howard, and Lynda. In 1990 Hinckley and his wife still lived at the Hinckley Farm located at 285 South 3110 West.