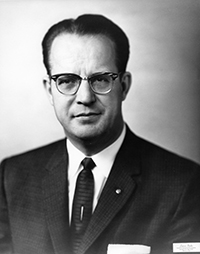 Harold E. Van Wagenen was born in Provo, Utah, on November 29, 1909, the son of Alma Van Wagenen and Birdie Gray. He grew up in Provo, attended Parker and Maeser Elementary Schools and Central Junior High, and in 1928 graduated from Provo High School. He attended BYU for two years before serving in the Swiss-German Mission. He was president of the Zurich District and was in Munich, Germany when Adolf Hitler became chancellor. In 1934 Van Wagenen earned his B.A. in economics with a German minor from BYU. 1 Harold E. Van Wagenen, interview by David M. Walden, 10 September 1990, Provo, Utah.

Unable to find work in Provo in the Depression, Van Wagenen began working in Salt Lake City for Utah Power and Light as a clerk-typist, but then became the secretary for Roy H. Ashworth, the general superintendent of UP&L. After working there for four years and eight months, he worked 19 months as a truck driver/salesman for the Coca-Cola Bottling Company. Soon after World War II began, he was hired as a cost accountant for the Defense Plant Division of Columbia Steel. He and a few others interviewed and hired over 6,200 men to staff the newly constructed Geneva Steel Plant, but then worked in industrial relations after the plant became operational.

With his brother Frank Van Wagenen, Harold constructed a new radio station which went on air on November 23, 1947. Originally known as KCSU, it was later renamed KIXX. Not only was it a financial success, it also provided jobs for several BYU students. For example, for six years Dallin Oaks was the chief announcer and engineer for KIXX. In 1972 the Van Wagenens sold the station, which still operates in Orem. 2 Van Wagenen interview, 1990.

In 1955 there was considerable discussion about the merits of a proposed change in city government to replace the commission with the city council-manager form. On August 8, 1955, city voters approved the change by a very narrow margin of only 25 votes. On January 3, 1956, the new arrangement was initiated and new city officials were sworn in to administer it. Of the seven city council members, four were elected from geographical districts, while three, including Van Wagenen, were elected at large. The council chose Van Wagenen mayor and W. Frank Killpack assistant mayor. The other five council members were Phil Perman, G. Marion Hinckley, George E. Collard, Roy D. Passey, and Stella H. Oaks, the first woman council member in Provo's history. 3 Joan Geyer, "New Provo 7-Member Council Sworn In," Daily Herald, date probably 3 or 4 Jan 1956, 1; "Historical Data," Provo City Ordinances, 1989; "New City Council Picks Van Wagenen as Mayor-Elect; Killpack Assistant," Daily Herald, 15 Nov 1955, 1.

In 1956, Mayor Van Wagenen received $50 per month and paid his own expenses in what was supposed to be a part time position. The reality was that he worked full time as mayor during the day and at the radio station at night. 4 John Clifton Moffitt, The Story of Provo, Utah (Provo, Utah: self-published by author, 1975), 273-274; Harold E. Van Wagonen oral history interview, Special Collection, Harold B. Lee Library, Brigham Young University; "Provo City Corporation Employee Classification and Salary as of February 15, 1956," unpublished typescript.

One of Van Wagenen's major responsibilities as the new mayor in 1956 was to contact applicants for the position as city manager. He talked to dozens of individuals, and finally recommended hiring E. Earl Udall, a former administrator of a small California city, to the new position. One reason for his choice was the fact that Udall was LDS and could thus adjust easily to the new community. The council approved Van Wagenen's choice on March 5, 1956.

Although Van Wagenen personally considered the council-manager arrangement "the finest form of city government ... the least expensive [and] ... the most representative," it proved to have some serious problems for Provo. After City Manager Udall left, the next manager lacked support from the city council. In 1961 the city voters rejected the manager form and returned to the city commission.

During his term as mayor in 1956 and 1957, Van Wagenen promoted development of North University Avenue, a strategy opposed by merchants on West Center Street. He claimed that the other council members almost always agreed with his ideas, but one exception was the council's 4-3 vote to commercialize Fifth West. Van Wagenen wanted to wait to see where Interstate 15 would enter Provo. A major accomplishment in his administration was the annexation of more than twenty properties, including the entire Edgement-Endewood area. This first annexation in about 20 years resulted in a substantial increase to the municipal tax base. 5 Van Wagenen oral history interview.

Van Wagenen said he accepted no special favors from community residents or leaders. For example, he never received any pressure from his close friend, Dr. Ernest Wilkinson, the president of BYU. Several years after his term as mayor, Van Wagenen considered it "the most exciting experience of my life ... My whole life has been spent in personal relations with people ... I sought nothing, outside of service to the city." He also called those two years as mayor an "exciting interlude" between business activities. In order to spend time with his business, he did not run again. "I couldn't continue to make the sacrifice," he said. 6 Van Wagenen oral history interview. An editorial in the Provo Daily Herald pointed out that Van Wagenen had a "rare combination of executive ability, training, and sound judgement" and that during his administration he spent hundreds of hours not required by the position. 7 "Mayor's Surprise Announcement," Daily Herald, 23 Sep 1957.

Afterwards, he accepted Governor George Dewey Clyde's appointment to serve on the State Board of Corrections. While running the radio station, he was chosen president of the Utah Broadcaster's Association. For 19 months he managed the new Rodeway Inn, and then from 1972 to 1982 was the men's fashion supervisor at the newly opened ZCMI in Orem's University Mall. 8 Van Wagenen interview, 1990. Van Wagenen also participated in the local Chamber of Commerce, Rotary Club, International Footprinter's Association, and the Utah Valley Wildlife Protective Association. 9 "Van Wagenen Candidate for Provo City Council," Daily Herald, 18 Sep 1955, 3.

Van Wagenen married Ruth Salisbury in the Salt Lake Temple in 1938. Their two daughters Sharee and Vicki both are married and live in California. In 1991, Mayor Van Wagenen and his wife lived at 905 East Center Street, where they have resided for over 40 years.