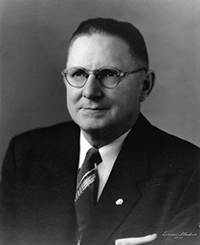 Aura C. Hatch was born in Franklin, Idaho on August 16, 1895 to Lorenzo Lafayette Hatch and Annie Scarborough. He went to school in Franklin and later at the Los Angeles College of Mortuary Science. He worked for Deseret Mortuary in Salt Lake City, Brigham City, and Provo before going into business for himself. The Aura C. Hatch Mortuary was located in Provo at 85 East 300 South. 1”Former Provo Mayor Dies,” Daily Herald, 7 Dec 1980, 4.

Hatch became interested in politics watching his father serve as a county commissioner in Idaho. After moving to Provo, he participated in many community and church affairs, so he was willing to run for mayor in 1953 when some friends approached him. His church and civic participation helped him win the November 3 election over Garn Carter. In his administration he worked with two other commissioners: Eldon Paine and Smoot Brimhall. Hatch supervised the police and parks; the other commissioners covered other city departments. Hatch was a full time mayor with a $6,000 annual salary, a little more than the other two commissioners. 2Aura C. Hatch, interview by Kay Alta Haynes, 5 Feb 1974, BYU Archives, transcript, 21-22, 27.

To meet the ongoing demand for more municipal water, Hatch negotiated to purchase water from a spring in the South Fork of Provo River. The city finally purchased those water rights, but the local newspaper was upset over not knowing previously about plans to buy it. 3Hatch interview 1974, 24-25.

Hatch went to Chicago to sign bonds for approximately $2 million to construct a sewage treatment plant. The bill approving the new plant had been signed just before he took office, but its construction was a highlight of the Hatch administration. 4 Hatch interview 1974; Owen Zuro, “Progress Slow in Post-War Provo as Money for City Operations Was Short,” Daily Herald, 8 Oct 1969, 8.

Also during Mayor Hatch’s term in office, the city purchased 13 acres for a park. The local Lions Club raised money to build facilities there, so it was named the Lions Club Community Park. The city not only owned the land, but provided park maintenance and scheduling. This was a good example of cooperation between the municipal government and a local service club. 5 Hatch interview 1974, 24.

Hatch generally had few major problems or conflicts during his administration. For example, he reported good relations with BYU and county officials. One exception was the public outcry over a city ordinance closing grocery stores on Sunday, a measure passed at the request of the owners of small grocery stores. The city changed the law due to so much criticism. 6 Hatch interview 1974, 22.

Hatch, like other political figures, sometimes was given credit for achievements he had influenced very little. For example, a street light was installed due mainly to neighborhood and PTA action, but many local persons praised Mayor Hatch for that accomplishment. He of course realized that sometimes just the opposite happens—when a leader is blamed for problems over which he had no control. 7 Hatch interview 1974.

Mayor Hatch served just two years out of the four to which he was elected, due to the city changing from the commission to the county-city manager form. Like some others in the community, he felt the quality of elected officials was more important than the specific form of municipal government.

Hatch served in the Eastern States Mission. He was bishop of the Provo First Ward and later a counselor and then president of the Provo Stake. From 1971 to early 1980 he officiated as a sealer in the Provo Temple. He was a charter member and president of the Provo Lions Club and had 100 percent club attendance for 40 years. 8”Former Provo Mayor Dies,” 1980; Hatch interview 1974.

On January 10, 1923, Aura C. Hatch married Mary Fuhriman in the Salt Lake Temple. He died in 1980 and was buried in the Franklin, Idaho City Cemetery. His survivors included his widow and two daughters. 9”Former Provo Mayor Dies,” 1980.