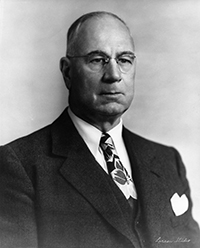 Love worked as a bookkeeper/accountant for the Smoot Lumber Company and then the Knight Investment Company. Next he became a manager for the Smoot Company. When that firm was bought by another company, he moved to Nevada to manage first the Gardner Ranch Company and then a company-owned store in Gold Hill, Utah. 3 ”History of Charles William Love, Jr.”; Political Ad for Bill Love, Daily Herald, 16 Oct 1949, 6.

After about three years in Gold Hill, Love moved to Hiko, Nevada to be part of a family cattle business. With his parents and brother Hugh and his family, Love helped manage up to 5,000 cattle on three ranches in Pahranagut Valley, located about 80 miles north of Las Vegas. He enjoyed riding a horse and going on cattle drives. 4 ”History of Charles William Love, Jr.”

When cattle prices fell after the 1929 depression, Love moved to St. George in 1930 to own and manage a drug store. In 1937 he moved to Salt Lake City, where he consulted for some mining companies, but was unemployed for awhile and worked for the federal Civilian Conservation Corps. After moving to Provo, Love was an accountant for Columbia Steel Company at Geneva, then was a salesman for the Prows & Stein Realty Company. In the later 1940s he and Velmar Kenner started Ken-Lo Corporation, a real estate and stock brokerage company. Love was a member of the Salt Lake Stock Exchange. That was his occupation when he ran for mayor in the fall of 1949. 5 ”History of Charles William Love, Jr.”; Political Ad; William Love, telephone interview by David M. Walden, 26 Sep 1990; Polk Cross-Reference Directory for Provo, Utah, 1944, 1946.

Love’s early civic involvement included serving on a school board in Nevada. While living in St. George, he was elected president of the Associated Civil Clubs of Southern Utah.

In the primary election on October 25, 1949, Love placed second with 1598 votes. Incumbent George E. Collard won the most votes, 1782. A third candidate for Provo mayor, Clyde E. Weeks, had been endorsed by the new Labor’s Joint Political and Legislative League of Utah County, an organization supported by the local AFL-CIO and International Association of Machinists. 6 Theron H. Luke, “Collard, Love Qualify for Mayor; Gardner, Lewis for Commissioner,” Daily Herald, 26 Oct 1949, 1.Love won the general election and took office in January 1950.

The city during Love’s administration built a municipal swimming pool. The city and also BYU, headed by Dr. Ernest L. Wilkinson, were growing rapidly. To accommodate the postwar boom, the city paved many streets and enlarged the sewage system. 7 ”History of Charles William Love, Jr.”{end-tooltip}

After his term as mayor, Love was appointed to be a regional manager of the Utah State Highway Department. On June 17, 1909 Love married Flora Smoot Newell in the Salt Lake Temple. They had three sons: Charles Ralph, now deceased; Raymond Newell, now retired in Las Vegas; and William Smoot, an attorney in Los Altos, California. For over ten years Bill and Flora Love lived at 444 North 400 East in Provo. She died on December 16, 1964, after 55 years of marriage. Charles William Love, Jr. died suddenly from a heart attack at his home in Provo on July 1, 1965. 9 ”History of Charles William Love, Jr.”; Polk Cross-Reference Directory for Provo, Utah, 1955, 1959.