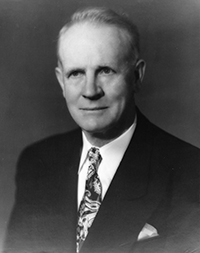 George Collard was born on February 20, 1893 in Fountain Green, Sanpete County, Utah. His parents, Willard Collard and Matilda Weeks, although poor, taught their seven children the importance of hard work and the Mormon faith. He grew up working in the fields and herding sheep. A good horseman, Collard enjoyed the outdoors and had several close calls with dangerous wild animals. 1”George Earl Collard,” typescript, unknown author, in possession of Ria Collard of Provo.

After graduating in 1908 from the eighth grade in Fountain Green, Collard attended Brigham Young University and the University of Utah. In the spring of 1914 he graduated from Snow Academy in Ephraim, Utah. In the fall he began teaching in Fountain Green and in December married a girl from his hometown, Annie Rozella Jensen, in the Manti Temple. Collard taught school two years in Fountain Green and during his second year also served as the school principal. Denied a raise his third year, he herded sheep for a while. This began a long career in sheepherding. Later in his life Collard would be chosen president of the Utah Wool Growers Association. But he quit herding temporarily to work as a cashier for the Bank of Fountain Green. 2”George E. Collard Announces Candidacy for Mayor of Provo,” Daily Herald 10 Aug 1947.

In 1923 Collard left his wife and four young children to begin serving in the Northern States Mission, where his duties included begin the president of the Milwaukee Conference.

After his mission he and his wife decided to buy a home in Provo, where they lived until 1934. Then they moved to Salt Lake City, where Collard managed the Utah Livestock Production Credit Association. In 1941 the Collard family moved back to Provo, where in 1947 he was ordained bishop of the Manavu Ward by Elder Spencer W. Kimball. Previously he was bishop of the Provo First Ward.

In June 1952 Collard and his wife began serving in the Eastern States Mission. They directed the Bureau of Information at Hill Cumorah in Palmyra, New York.

A staunch Republican, Collard began his political activities by getting elected to the Fountain Green City Council. For six years he was a member of the North Sanpete School Board.

In November 1947 Collard defeated Mark Anderson by a large majority to be the city’s new mayor. At that time he was the chairman of the Utah County Republican Party. 3”Collard, Payne, Benson Win in Provo Election,” Daily Herald, 5 Nov 1947, 1. He was sworn in as mayor on January 5, 1948 for a two-year term as mayor. The city commission, made up of Collard, J. Earl Lewis, and Eldon W. Wayne, assigned Collard the Departments of Public Safety and also Public Affairs and Finance.4”Historical Data,” Provo City Ordinances 1989; “Provo Commission Assigns Posts at Initial Session,” Daily Herald, early January 1948. During the Collard administration, initial steps were taken to integrate the municipal power system within city government, thus ending its autonomous status. In addition, major improvements were made in roads, parks, and the sewage system. Bonds to finance these projects had been approved by city voters in 1947. 5Owen Zuro, “Progress Slow in Post-War Provo as Money for City Operations Was Short,” Daily Herald, 8 Oct 1969, 8.

In the summer of 1949 Collard dedicated the Provo Airport, a project funded largely by the federal government. Former mayors Mark Anderson and Maurice Harding had major roles in the origin of the new airport.6”Provo Program Complete for Airport Dedication,” The Salt Lake Tribune, 28 Jul 1949, 1-2. Collard lost a reelection bid to C. W. Love in the fall of 1949, but he later served three terms in the Utah Legislature and as a Provo city councilman in 1956. 7”Sanpete Leader, Collard, 89, Dies,” The Salt Lake Tribune, 3 Mar 1982, D-2.

Collard and his wife left Provo in 1969 and moved to Fairview, Utah. He continued in the sheep business until he was hurt when a horse threw him. When he retired, he owned 30,000 acres of land. He died on February 28, 1982 and was buried in the Fountain Green Cemetery. 8”Sanpete Leader,” 1982. In 1990 his widow lived in Salt Lake City and his daughter Mrs. Gordon (Ria) Collard lived in Provo. 9Ria Collard, personal communication with David M. Walden, 12 Aug 1990.