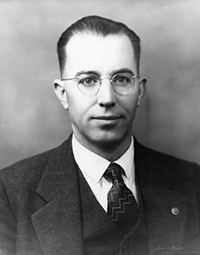 After returning from the war, Harding learned shorthand and typing, skills that got him a job as a secretary in a local law firm. Three lawyers helped him study law in his spare time in an apprenticeship system. In 1924 he took the bar exam and was admitted to the Utah bar. From 1925 to 1927 he served in the Northern States and Northwestern States Missions. 2Pardoe 1955; Harding interview 1990.

Harding’s general law practice included property titles, deeds, mortgages, divorces, probate cases, and wills. Like medical doctors of the pre-World War II era, he would go to his client’s home if needed. He also worked in the thirties as a part time bookkeeper/accountant to help clients overcome problems with the Internal Revenue Service.3Harding interview 1990.

In the fall of 1928 he ran for city judge because of the encouragement of his friends. He was elected along with other Republicans like President Herbert Hoover. Harding was city judge from January 1929 to January 1933, but failed to win reelection in the fall of 1932 when Democratic candidates were victorious. So he returned to private law practice and found working with banks and the Provo School District kept him busy.4Harding interview 1990.

In October 1940 Harding was appointed to be a city commissioner to replace Jesse Haws who had died in office. Then on August 28, 1941 he was appointed to be the new mayor after Mark Anderson resigned to take a state position. That fall he was elected mayor and continued in that position through 1945.5”Historical Data,” Provo City Ordinances 1989.

Second, the city had to deal with changes due to the war effort. Primarily, that meant coping with demands for extra services related to the construction of Geneva Steel. To build water mains, the city borrowed money at a very low interest rate from a Chicago firm. Some residents feared more crime when so many outsiders came to build the new steel plant. They urged the city to increase its police department. A corps of volunteers was organized to help the police, but there was no increase in violent crimes during the war era. When federal officials urged Provo to tear up University Avenue and Center Street to salvage old steel railroad tracks, Mayor Harding refused, since the city would have had to repave those streets. To deal with the growing community, the city hired a zoning expert and started its first garbage collection system.7Harding interview 1990; Zimmerman 1978. The tremendous influx of outsiders was responsible for the start or expansion of several Protestant churches in Provo. See David M. Walden, Protestant and Catholic Churches of Provo (Provo, Utah: Brigham Young University, Center for Family and Community History, 1986).

The third major accomplishment was significant progress in establishing the Provo Airport. Some land owners refused to sell their land near Utah Lake to the city, so the city officers filed a condemnation suit in district court. Backed by the state government in this case, the city finally got the land it needed. There was some discussion about making a military seaplane base next to the airport, but that never materialized.8Harding interview 1990.

Because Harding’s law practice had suffered while he was mayor, he chose not to run again in the 1945 election. After resuming his private practice, he was appointed a judge in the Fourth District Court. He heard cases in most Utah counties and even wrote some opinions at the request of the Utah State Supreme Court. In October 1988 Harding retired from his law practice.9Harding interview 1990

In addition to politics and the legal profession, Harding was a devoted family man and served in many community activities. In 1928 he married Montez Davies and they had seven children. Harding donated many hours to the Boy Scouts, earning the Silver Beaver award in 1955. While mayor he was also bishop of the Provo Third Ward.10Harding interview 1990; Pardo 1955.