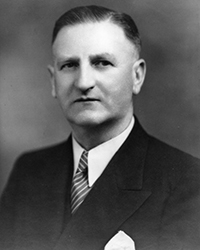 A. O. Smoot III was born in Provo, Utah on September 9, 1879, the oldest of six children of Abraham Owen Smoot II and Electa Bullock. A. O. Smoot III attended eight years of public schools in Provo, and then went to the Brigham Young Academy for three years, completing approximately the equivalent of today's high school diploma. 1 Fern Smoot Taylor, "Abraham Owen Smoot III Life Sketch," typescript, 1989. Taylor a daughter of A. O. Smoot III, in 1990 was working with her sister Anna Smoot Taylor on a history of their father.

After serving an LDS mission in Tennessee without purse or script, Smoot returned to Provo, where he became the district manager for International Correspondence Schools (ICS) based in Scranton, Pennsylvania. He traveled throughout the state for ICS and in his spare time completed several courses himself. He also bought a small herd of dairy cows and ran the Timpanogos Dairy, the predecessor of the Smoot Dairy of Bountiful. 2 Taylor 1989.  Smoot's herd of Jersey cows helped Provo gain the reputation as the "Jersey Isle of America." 3 J. Marinus Jensen, Early History of Provo, Utah (Provo: self-published by author, 1924) 303.

Many of Smoot's relatives had been politicians: grandfather A. O. Smoot I a Provo mayor, father A. O. Smoot II a member of the Utah House of Representatives, and uncle Reed Smoot a U.S. Senator. After ending his postmaster responsibilities in 1922, A.O. became the chairman of the Utah County Democratic Party. In 1923 he was elected to the first of three terms as a Utah County Commissioner. 5 Taylor 1989.

In the fall of 1933 Smoot was elected to a two-year term as Provo's mayor. After taking office in January 1934, Smoot was assigned by the City Commission to oversee the Department of Public Affairs and Finance and the Department of Public Safety. The other two commissioners, J.E. Snyder and Walter P. Whitehead, supervised the other city departments. 6 "Historical Data," Provo City Ordinances, 1989; Provo Commission Minutes, 1934-1935, 1.  Before turning over the helm of municipal government to his successor Mark Anderson, Smoot described the highlights of his administration. He considered the improved financial condition of the city a major achievement. But according to another source, the administration was "cramped severely by a lack of money. The city was forced to issue refunding bonds and take out loans to pay off its debts." 7 A. O. Smoot III, "On Turning over the Office of Mayor," typescript, n.d., copy from Fern Smoot Taylor; Owen Zuro, "City Shares Construction Cost of Present City-County Building," Daily Herald, 7 Oct 1969, 3.  Inadequate city financial records made it impossible to resolve this apparent contradiction. 8 City Commission Minutes for this era include financial data, but even those records are contradictory. Provo City Treasurer David Nielsen said the city's annual financial reports are available only from the 1960s, thus this difficulty was not resolved. It may be that both Smoot and the reporter were correct.

With the help of the state and federal governments, improvements were made in the water and sewage system, road paving, and drainage system on the east side of town. Plans were made for a swimming pool and airport. New equipment was purchased for the police and fire departments. With the support of Senator King and Congressman Robinson, $225,000 in federal funds were appropriated for a new Provo post office. City ordinances were passed to include fire and police department workers in the Civil Service system. 9 Smoot, "On Turning over the Office of Mayor."  These were significant city improvements in the midst of a severe national depression.

After losing his re-election bid to Mark Anderson, Smoot became the district manager of Deseret Mortuary, a position he held until his death in 1937. His popularity led some to think he might become the next Utah governor, but his death at age 57 cut short his political career. 10 Taylor 1989.

Smoot's community involvement extended to numerous other activities. For five years he served on the Provo School Board and contributed to the PTA in its early history. He also participated in the Provo Chamber of Commerce and Kiwanis Club. Church activity included work as a home missionary, Sunday School teacher and leader, and leader of a program for senior citizens in the Utah Stake. For several years he was the senior president of his Seventies' Quorum. Smoot spoke at numerous church meetings, conferences, funerals, and other public gatherings. 11 Taylor 1989.

On August 17, 1904 Smoot married Phoebe Campbell in the Salt Lake Temple. They had five children. Smoot died on July 16, 1937 when stress from flu proved too much for his weak heart. He was buried in the Provo City Cemetery. 12 Taylor 1989; Provo City Cemetery Records.