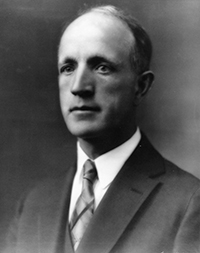 After working at a store in Heber, Van Wagenen moved to Salt Lake City where he worked about three years as a salesman and auditor for the Studebaker Brothers Manufacturing Company. He sold buggies, wagons, and bicycles. As the district auditor, he traveled to other cities. Van Wagenen worked under Jim Quigley, the Studebaker manager in Salt Lake City. 2 Frank Van Wagenen 1990; The "Vans."

In 1898 he moved to Provo, since he thought he could do as well in his own business as working for someone else. He at first sold wagons and carriages, but then began the first automobile dealership in Utah south of Salt Lake City. Unlike today's car dealers, Van Wagenen sold any car consumers wanted. However, he sold mainly Studebakers. Around the turn of the century he played a role in the Vernal Duchesne Stage Company which provided stagecoach service in the Uinta Basin. 3 Frank Van Wagenen 1990; The "Vans."

In 1907 the Buick Company offered him a new dealership, which he accepted, but he continued to sell other cars if someone asked for them. His dealership initially was in the building now [1990] occupied by Lloyd's Business Machines at 324 West Center Street. Later it was moved to University Avenue where Office Essentials currently is located. Van Wagenen's mother became the first woman in Provo to drive a car.

In 1921, Van Wagenen sold his car business to A. B. Worlsey and entered finance, providing mainly home and farm loans. That was his livelihood when he was elected mayor in 1927. He promised the people of Provo he would get the city out of debt in his administration and he did just that. Before the next election, the city had over $200,000 in its treasury. 4 Harold E. Van Wagenen, interview at BYU archives. New baseball stands were built on Ninth South and Univeristy Avenue. The city built a golf course on what originally was the Provo First Ward pasture. Another municipal milestone during the Van Wagenen administration was an agreement with Utah Power and Light to provide street lighting. 5 Owen Zuro, "City Shares Construction Costs of Present City/County Building," Daily Herald, 7 October 1969, 3 .Van Wagenen was mayor when the stock market crashed in 1929.

Van Wagenen was a member of the Democratic Party. In the fall of 1932 he took his wife and children to the party's national convention in Chicago. His wife was a national delegate and he was an alternative delegate, while his son Frank was a page at the convention. They witnessed the nomination of the next president, Franklin D. Roosevelt. 6 Frank Van Wagenen 1990.

When Van Wagenen's finance business failed in the depression, he began fruit orchards on approximately 100 acres near the mouth of Provo Canyon. Part of the those orchards were at the site of the present Cascade Golf Course in Orem. He had his own packing plant where trucks were loaded with produce.

In 1938 Van Wagenen got out of the produce business and with his son Frank began Van Wagenen Investment Company. When Frank went into the military in 1944, the company was sold and he invested much of his money in American Telephone stock. Van Wagenen was also a director of the Farmers and Merchants Bank. 7 Frank Van Wagenen 1990; The "Vans."

Van Wagenen was active in church and community affairs. He was a member of Rotary Club, Timpanogos Knife and Fork Club, and the Chamber of Commerce. He and his wife loved dancing and belonged to a local dance club. He played the piano and was in a family orchestra with his siblings before he got married. He also enjoyed sports such as baseball and cycling. He was group leader of the High Priests group in the Provo Fifth Ward. 8 Frank Van Wagenen 1990; The "Vans."

Van Wagenen married Birdie Gray in 1899 in the Salt Lake Temple. They had eight children, but only six were raised to adulthood: Clifton, Loree, Harold, Frank, Dean, and Irene. In 1914, he began building a beautiful new home designed by architecht Joseph Nelson at 415 East Center. Construction was completed in 1917. The interior is noted for its woodwork made of cherrywood imported from Des Moines, Iowa. Frank Van Wagenen still lives in this family home and his brothers Dean and Harold also continue to reside in the hometown of Provo. Mayor Van Wagenen died on December 17, 1959 and was buried in the Provo City Cemetery. 9 Frank Van Wagenen 1990; The "Vans."