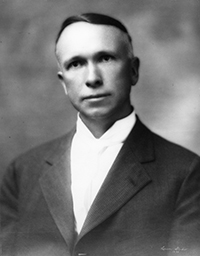 On September 26, 1874, O.K. Hansen was born in Fairview, Utah. His parents, Charles (Carl) Keilgaard Hansen and Caroline (Karen) Rasmussen, were both natives of Denmark. He attended school in Sanpete County. Early in life he decided on a professional career. At age 16 he was on his own. For several years he worked in railroading, milling, ranching, and sales, while attending school whenever possible. Between 1898 and 1900 Hansen served in the Northen States Mission in Wisconsin, Iowa, and Missouri. He attended Brigham Young University and graduated from Kansas City Western Dental College. 1 Ancestral File, Individual Record, LDS Family History Library; "Former Mayor of Provo is Dead," Deseret News, 3 February 1930, 1; O.K. Hansen Diaries, 1899-1900, Brigham Young University Archives, MSS 169, cited in Davis Bitton, Guide to Mormon Diaries & Autobiographies (Provo, Utah: BYU Press, 1977), 141.

Hansen became a prominent dentist in Utah County, practicing a short time in Mt. Pleasant and Spanish Fork before moving to Provo in 1906. He was instrumental in seeing that Provo received its fair share of state funds intended for education. As one of the board of directors of the Provo Commercial Club, Hansen promoted the construction of the City/County Building. He also was the head of the local Chautauqua Committee, the Boy Scout Timpanogos District Council, and the Utah Public Health Association. 2 "Dr. Hansen Favors Band Concerts on Sunday," Daily Herald, 21 Oct 1921, 1; "City Candidates Face Primary Election," Daily Herald, 24 October 1921, 1; "Former Mayor," 1930.

When Hansen ran for mayor in 1921, the following description of him was printed on the front page of the Daily Herald.

"Most Provo voters are well acquainted with Dr. Hansen, and most people like him, excepting during the few moments it takes to extract a tooth ... the doctor has acquired high rank in his profession. As a citizen he has attained eminence as one seriously and actively interested in the welfare of the government and the people. He is American through and through."3 "Dr. Hansen Favors," 1921.

Hansen's campaign slogan was "A square deal for each; a better town for all." In the October primary, he and John S. Smith, manager of the Knight Woolen Mills, received the most votes, then on November 8, Hansen defeated Smith in the general election.4 O.K. Hansen Political Ad, Daily Herald, 21 October 1921, 3; "Hansen and Smith, Thompson, Billings," Daily Herald, 26 October 1921, 1. He was re-elected twice with little opposition.

While mayor in Provo, Hansen was chosen president of the Utah Municipal League and was a key figure in promoting the passage of zoning laws by the state legislature. He was also noted for his interest in city recreation and playgrounds.5 "Former Mayor," 1930.

During Hansen's administration, the so-called "Jazz Age" influenced Provo. In many ways the city then was little different from other parts of the nation. Although lagging somewhat behind national trends, by the mid-1920s young women were wearing short bobbed hair as advertised by local beauty and barber shops. The dress styles of the day likewise became part of Provo in the twenties.6 Jeanne W. Pittman, "Provo, Utah, and the Morals Problem of the Roaring Twenties," unpublished paper, 1973, BYU Special Collections.

Liquor prohibition in the 1920s was not successful in Provo. By 1910 local prohibition ordinances were in place and the state passed anti-booze laws in 1917. The Eighteenth Amendment to the U.S. Constitution prohibiting the manufacture and sale of liquor was ratified in January 1920. In spite of such laws and the strong anti-liquor stand by Mormon church authorities and many residents, liquor production continued, by small family operations or large illegal moonshine producers. It is rather amusing to realize that one such operation that could produce 200 gallons of liquor in just 24 hours took place "in the shadow of the city and county building."7 Pittman 1973. Due to widespread public opposition to Prohibition in Utah and the rest of the United States, in 1933 the Eighteenth Amendment was repealed.

Due to improved transportation and communication, Provo's isolation had decreased by this time. Radio broadcasts and movies brought in outside influences. You could find drunken parties, blaring jazz bands at Geneva Resort near the present steel mill, close dancing, flaming youth, bathing beauty contests at the Strand Theater, and Greta Garbo movies. Although still a small city, Provo had elements of the larger metropolitan centers where such behavior was better known. Of course, not all young people participated in such trends, and many who did settled down as they grew a little older.8 Gary C. Kunz, "Provo in the Jazz Age: A Case Study," Brigham Young University, M.A. thesis, 1983, 67, 84.

The local economy in the Hansen administration was also influenced by outside forces. The best example is Columbia Steel Corporation of San Francisco building its Ironton plant between Provo and Springville. Construction began in 1924 and in November 1926 it was dedicated. Mayor Hansen and other dignitaries attended an open house the next month.9 Kunz 1983, 47-48.

In addition to politics and his profession, Hansen was devoted to his family and church. He married Helena D. Anderson in the Manti Temple on June 11, 1902. They had six children, one son and five daughters. The Hansen family home was at 950 North 100 East. He was noted as a fine Sunday School teacher in the Manavu Ward and for several years served on a stake Sunday School board.10 Ancestral File; "Former Mayor," 1930.