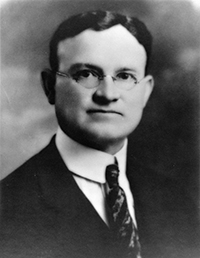 LeRoy Dixon was not only a political leader in Utah County, but also a prominent businessman. On October 16, 1881 he was born in Provo to Henry Aldous Dixon and Sarah DeGrey. He had eight siblings, plus six half brothers and sisters. Dixon grew up in Provo, where he attended public schools and then Brigham Young Academy from 1892 to 1898. 1T. Earl Pardoe, The Sons of Brigham (Provo: Brigham Young University Alumni Association, 1969) 52-54.

At age 17 LeRoy began working for Taylor Brothers Company in general merchandising. Since he believed wealth was based on land ownership and water rights, he left Taylor Brothers to gain experience in real estate with W. H. Ray & Company. His work there ended in 1906 when he began a Mormon mission in England. 2T. Earl Pardoe, The Sons of Brigham (Provo: Brigham Young University Alumni Association, 1969) 52-54.

After returning to Provo, Dixon and J. Elmer Jacobsen started their own business called Dixon Real Estate Company, which grew rapidly to became a major real estate firm in the state. In addition, he was president of the Provo Ice & Cold Storage Company from 1905 to his death. His ice plant near the Denver & Rio Grande Railroad was crucial in keeping produce cool until the railroad built its own ice plant. Eventually electricity made all ice boxes obsolete. Other business activities included being an officer or leader of the Blue Cliff Canal Company, State Realty Association, Utah Land Owners Association, the South Fork Cattle Company, Skipper Bay Drainage District, Provo Building & Loan Association, and the Dixon Ranch. 3 T. Earl Pardoe, The Sons of Brigham (Provo: Brigham Young University Alumni Association, 1969) 52-54.

Dixon participated in many political and civil causes and positions, in addition to being a city commissioner and mayor. From 1913 until near the time he died, Dixon was the secretary of the Provo Board of Education. He chaired the Utah County Draft Board in 1918. Dixon's concern with water can be seen as a member of the Utah Water Storage Commission. As a member of the Utah Public Health Association, he fought Utah Lake pollution. He took part in the Municipal League of Utah, the Utah County Taxpayers Association, Utah County Reclamation, Provo Public Library Board, Provo Chamber of Commerce, and Kiwanis when time permitted. He took time out from these many responsibilities to play tennis at the Provo Tennis Club and attend community and BYU sport events. 4 T. Earl Pardoe, The Sons of Brigham (Provo: Brigham Young University Alumni Association, 1969) 52-54.

A staunch Republican, Dixon served as one of the city's first commissioners when that form of government was implemented in 1912. He was a city commissioner until the end of 1917, then served two terms as mayor from 1918 through 1921. Thomas C. Thompson, Henry J. W. Goddard, and Charles Hopkins were commissioners while Dixon was mayor. 5 "Historical Data," Provo City Ordinances, 1989. During the Dixon administration, the city was hard hit by two challenges. First, a terrible fire on July 30, 1918 seriously damaged Provo Woolen Mills, which never recovered. 6 John Clifton Moffitt, The Story of Provo, Utah (Provo: by the author, 1975) 160. Then in the winter of 1918-1919, just a short time after World War I ended, many died in the city from one of the century's worst disease outbreaks which killed about 500,000 in the nation. 7 Pierce C. Mullen and Michael L. Nelson, "Montanans and 'the Most Peculiar Disease': The Influenza Epidemic and Public Health, 1918-1919" Montana, The Magazine of Western History (Spring 1987) 52. During the influenza epidemic, medical science of that day could do little. Viruses, the cause of the flu, were not discovered until years later. However, not all was gloom and doom in the Dixon era. One positive step occurred in 1919 when construction of the City County Building began. The city paid one third of the total $576,495 for that facility. 8 Owen Zuro, "City Shares Construction Cost of Present City/County Building," Daily Herald, 7 Oct 1969, 3.

Dixon in 1903 married Electa Smoot, the daughter of A. O. Smoot II and Electa Bullock. Dixon died on December 28, 1926 from blood poisoning and pneumonia. 9 T. Earl Pardoe, The Sons of Brigham (Provo: Brigham Young University Alumni Association, 1969) 52-54. He is buried in the Provo City Cemetery.