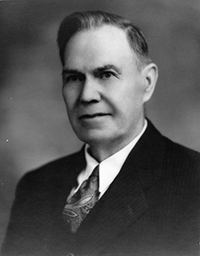 James Edward Daniels, also known as James E. Daniels, Jr., was the third generation to have the given name James. His father was James Ephraim Daniels, born in Manchester, Lancashire, England on February 9 , 1825 to James Daniels and Elizabeth Salthouse. James Ephraim Daniels in November 1841 was baptized at age 16 into the LDS church. The following year he sailed with his mother's family in the ship Medford to join the Saints in the United States. After landing in New Orleans, Daniels traveled to Quincy, Illinois where his sister lived. He lived there until 1845 when he moved to Nauvoo. When the body of the Mormon Church moved west, Daniels returned to Quincy. In 1850 he and his wife Elizabeth Jane Jones and her parents left Quincy and crossed the plains to Salt Lake City. In December of that year he helped found Payson, making his family the fourth to move there. 1 Andrew Jenson, Latter-day Saint Biographical Encyclopedia: A Compilation of Biographical Sketches of Prominent Men and Women in The Church of Jesus Christ of Latter-day Saints (Salt Lake City: Andrew Jenson History Company, 1901-1935), vol. 1, p. 498. His son, James Edward Daniels, the subject of this essay, was born in Payson on 18 November 1853. 2Ancestral File, BYU Family History Library. In the fall of 1854 the Daniels family moved to Provo.

In Provo, James Daniels set a good example of civic service for his son. He worked as a carpenter while serving as a city councilor in 1864 and 1865. He also was an alderman the following two years. In 1870 he left carpentry when appointed Utah County assessor and collector. Daniels was elected in 1874 to be both county recorder and county treasurer. He died in 1902, too soon to see his son elected mayor. 3 Frank Esshom, Pioneers and Prominent Men of Utah (Salt Lake City: Utah Pioneers Book Publishing Company, 1913), 836. Digital copy in the Family History Archive (http://contentdm.lib.byu.edu/u?/BYUIBooks,6861 : accessed 24 Aug 2009).

At age 16, James Edward Daniels followed in his father's steps by becoming a carpenter's apprentice. However, he expanded his interests considerably beyond carpentry. In 1873 he began in the cattle and horse business, paying particular attention to pureblood stock. He lived on a farm west of Provo. Around the turn of the century he and Reed and Owen Smoot were largely responsible for introducing fast racing horses into Utah County. He also owned a ranch in Carbon County.

Daniels' other business ventures included owning, along with A. D. Holdaway, one of the state's largest gray sandstone quarries. Daniels, Holdaway, and S. S. Jones for several years worked together as railroad contractors. They provided 15,000 ties for the Rio Grande Western Railway.

With Utah's statehood in 1896 and the entry into national politics, Daniels chose to affiliate with the Democratic Party. For several years he was deputy sheriff under John W. Turner. Daniels resigned from the City Council to become the City Marshall. 4Portrait: Genealogical and Biographical Record of the State of Utah (Chicago: National Historical Record Co., 1902) 451-452; Esshom, 836; Jenson, I: 498. Because of three generations each having the name James Daniels, it becomes rather confusing. For example, Moffitt's index entry for "James E. Daniels" includes information on James Eprhaim Daniels and his son James Edwards Daniels.

When Daniels was Provo's mayor in 1916 and 1917, some noteworthy events occurred. In 1916 the Orem Interurban Railroad, which had reached Provo from Salt Lake City in 1914, was extended to Payson. 5 John Clifton Moffitt, The Story of Provo, Utah (Provo, Utah: self-published by the author, 1975) 126. In 1917 the city fire department got its first motorized fire engine.

Mayor Daniels found himself in the national upheaval of World War I. For example, in 1916 the local newspapers reported on European battles in which some American volunteers, including local residents, were involved. Parades and speeches were made to promote patriotism. The nation tried to remain neutral, but gradually was affected by Germany sinking our ships. On April 6, 1917, at the request of President Woodrow Wilson, Congress declared war. Mayor Daniels and the Provo Chamber of Commerce supported this cause in a telegram urging Reed Smoot and William H. King in Congress to support President Wilson's military draft. Eventually 21,000 Utah men volunteered or were drafted. 6John Clifton Moffitt, The Story of Provo, Utah (Provo, Utah: self-published by the author, 1975) 109-110.

Most of this sketch comes verbatim from David M. Walden, Biographical Sketches of Former Mayors of Provo, Utah: A Report to the Provo Municipal Government, 1 Oct 1990, 65-67.