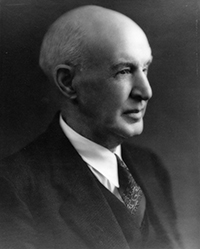 William H. Ray was born in Gentry County, Missouri on December 30, 1864 to William and Martha E. Ray. He grew up on his father's farm and went to nearby schools. After receiving a teaching certificate, he taught school in Harrison County and then in Red Oak, Montgomery County, Iowa. He moved to Cheyenne County, Kansas to homestead 160 acres of land. Two years later he began a real estate business and helped newcomers relocate on government lands. In 1888 he moved to Harvard, Nebraska to work in a stock business. Because his business was not successful, he moved to Salt Lake City in 1890. 1 Portrait: Genealogical and Biographical Record of the State of Utah (Chicago: National Historical Record Company, 1902) 398.

In 1891 Ray moved to Provo to accept a position as car inspector for the Union Pacific Railroad and then the Oregon Short Line Railway Company after it separated from Union Pacific. He soon took advantage of the real estate boom in the area. In spite of limited salary from the railway company and therefore limited investment funds, in a period of five years he had advanced to become the senior partner in W. H. Ray Company, the largest real estate business in the area. The firm handled choice business and residential properties, negotiated loans, wrote insurance, and dealt with collections. It also offered Utah mining, commercial, and industrial stocks. Ray also was president of the State Bank of Provo, organized on March 11, 1902. The bank eventually became part of the Central Bank and Trust Company, still located at the original address which it occupied around the turn of the century at 75 North University Avenue. He was a director of the city's Commercial Club in 1910. 2 Portrait, 338; William M. Wilson, Pictorial Provo: An Illustrated Industrial Review of Provo, the Garden City of Utah ([Provo, Utah: The Commercial Club], 1910); John Clifton Moffitt, The Story of Provo, Utah (Provo, Utah: J. C. Moffitt, 1975) 252.

The liquor prohibition controversy was a central issue in the election and administration of Mayor William H. Ray. Encouraged by national anti-alcohol sentiment, a local LDS stake president in 1909 urged the city to pass such an ordinance. On August 10, 1909 a convention on prohibition was held for officers of the several cities in Utah County. They agreed to pass similar prohibition laws that Fall. Provo's "dry" law became effective January 1, 1910. But the "wet" forces did not give up. When the Democratic and Republican Parties endorsed prohibition at their city conventions in October 1909, the wets from both parties decided to sponsor their own candidate, William H. Ray. He was elected in November 1909, but the united drys of the Republican and Democratic Parties succeeded in getting a dry city council elected. The new mayor, who served in 1910 and 1911, urged repeal of the prohibition ordinance but the city council refused. Mayor Ray appointed a wet city marshall, but the city council would not confirm him. The council tried to dismiss two wet policemen, but the mayor vetoed the city council resolution. When the new commission form of government took over in 1912, a dry Democrat, Charles Decker, was elected mayor, along with two dry city commissioners. 3 J. Marinus Jensen, Early History of Provo, Utah (Provo: J. M. Jensen, 1924) 218-220.

In 1899 the Ray family built a beautiful home on the corner of 400 South and University Avenue, one of the finest dwellings in the community and a visible reminder of Ray's prosperity. Restored by the Morganson family, the former Ray home is now the Pullman Bed and Breakfast Inn. 5 Portrait, 398; John Clifton Moffitt, The Story of Provo, Utah (Provo, Utah: J. C. Moffitt, 1975) 263; Kenneth L. Cannon, Provo & Orem: A Very Eligible Place: An Illustrated History (Northridge, Calif.: Windsor Publications, 1987) 55, 97.