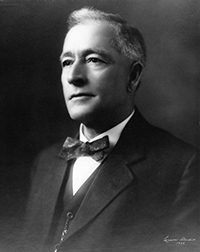 Decker grew up in Salt Lake City and attended school there. At age 19 he began working in teaming, which he did until 1886 when he began working as a messenger between Ogden and Cheyenne for the Pacific Express Company. In 1890 he became a salesman for the wholesale division of the company. Charles F. Decker was born in Salt Lake City on September 15, 1863, the third of eleven children born to Isaac Perry Decker and Elizabeth Garret Ogden. His father was one of the first Utah pioneers, arriving in 1847 as a boy of seven. 1 Portrait: Genealogical and Biographical Record of the State of Utah (Chicago: National Historical Record Company, 1902), 455; Ancestral File, BYU Family History Library.

Decker moved to Provo in 1892 to take charge of the Cosmopolitan Hotel. Drawing on the experience he gained at the Pacific Express Company, he began C. F. Decker and Company to be a wholesale dealer of fruits, produce, fish, and game in 1893. It handled not only Utah fruit, but also California fruit that was marketed in southern Utah. Most goods were handled by consignment. Decker managed the firm with the assistance of Julius Anderson. Annual sales by 1902 had reached at least $75,000. By 1910 the company was located in a large new building opposite the depot of the Rio Grande Western and San Pedro & Los Angeles railroads. One of Decker's contributions was bringing to Utah County the first carloads of seed potatoes, which were then distributed among farmers to improve future crops. Like many other businessmen Decker had some mining properties, in this case in the Tintic Mining District. 2 Portrait: Genealogical and Biographical Record of the State of Utah (Chicago: National Historical Record Company, 1902), 455; William M. Wilson, Pictorial Provo: An Illustrated Industrial Review of Provo, the Garden City of Utah ([Provo, Utah: The Commercial Club], 1910).

Decker began his political career in Provo as city councilman from 1902 to 1905. He served during the administrations of Mayors Thomas N. Taylor and William M. Roylance. 3 "Historical Data," Provo City Ordinances (1989).

Decker served two terms as Provo mayor, first in 1908 and then in 1909 after defeating the incumbent Mayor Joseph H. Frisby. Mayor Decker's first term was significant for the controversial decision to approve a new railroad depot on Third West and Sixth South (see the page for Mayor Frisby for more details). Another milestone for the city occurred in 1909 when the first city-wide sewer system was planned, replacing the few patchwork sewers that were first constructed in the early 1890s. In the fall 1909 election the two "dry" candidates, Democrat Charles Decker and Republican Simon P. Eggertson, lost to the "wet" independent candidate William H. Ray. 4J. Marinus Jensen, Early History of Provo, Utah (Provo: J. M. Jensen, 1924) 211.

In Decker's second term from 1912 and 1913, he was the first mayor to serve under the commission form of city government. A 1911 state law required second-class cities, like Provo, with a population between 5,000 and 10,000, to have a three-person city commission consisting of a mayor serving as chairman and two other commissioners. By a city resolution of January 1912, Mayor Decker was responsible for Public Affairs and Finance, and Parks and Public Property. Commissioner Henry J. W. Goddard administered Water Supply and Water Works, while Commissioner LeRoy Dixon was in charge of Public Safety. 5 J. Marinus Jensen, Early History of Provo, Utah (Provo: J. M. Jensen, 1924) 184-185, 219.