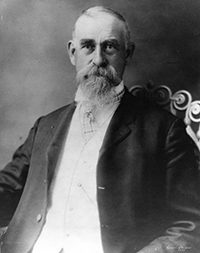 Joseph H. Frisby was born in Birmingham, Warwick, England on May 15, 1850. His parents were William Frisby and Elizabeth Ruff. 1 The Church of Jesus Christ of Latter-day Saints, comp., "Ancestral File," CD-ROM. In 1864 he and his sisters Emily and Elizabeth moved to the USA and located in Coalville, Utah. The LDS church sent him in 1877 to help colonize Arizona. He and his wife Dicy Ann Frisby, whom he had married the year before, were some of the first settlers in Forest Dale, Arizona. In 1879 they moved to Show-Low and relocated in Taylor in 1888 and Snowflake in 1890. In Arizona, Frisby became a prominent farmer and sheep raiser. He also was justice of the peace in the Show-Low Precinct and recorder for Navajo County. His church callings in Arizona included high councilman and missionary in the eastern Arizona stakes. He served a mission in Great Britain from 1899 to 1890. In 1903 Frisby moved to Provo and soon became a well-known businessman. 2 William M. Wilson, Pictorial Provo: An Illustrated Industrial Review of Provo, the Garden City of Utah ([Provo: The Commerical Club], 1910); "Former Mayor J. H. Frisby Passes Away," Daily Herald, 2 Dec 1915, 1; "Mrs. J. H. Frisby Died Saturday Afternoon," Daily Herald, 8 Nov 1915, 1.

The 1905 municipal election found Frisby in the center of an internal community struggle that began decades earlier. For several years "West End" businessmen had promoted development along West Main Street (now 500 West) and West Center Street, the original heart of the downtown business area. Then in the 1870s and 1880s, the "East End" of downtown began to be built up along East Main Street (now University Avenue) and East Center Street. A court house, two railroad depots, and new businesses sprang up. The struggle came to a head in the late 1890s with a controversy over where to build a new railroad depot. Not only businessmen, but also politicians and church authorities became involved. In a talk before the Provo Rotary Club in 1970, Clayton Jenkins spoke about the battle.

"The bitter fight [over the depot's location] divided the town ... Every man who resided west of the ditch (commonly called the mill race) was regarded with suspicion by the East Siders and those residing in the West were prone to look at their eastern brethren as renegades and varmints of a low order." 3John Clifton Moffit, The Story of Provo, Utah (Provo: Moffit, 1975) 279.

In 1905 this matter was the central issue in the mayor's race. The West Enders, led by businessman T. N. Taylor, captured the Republican convention and chose Joseph H. Frisby to be their nominee. The East Enders nominated incumbent Mayor William Roylance for re-election. Frisby won by a narrow margin and served as mayor in 1906 and 1907. However, no decision was made regarding the railroad depot during the Frisby administration. Charles Decker, who defeated Frisby in the 1907 election, was the mayor in 1908 when the city council finally approved a new depot at the intersection of Third West and Sixth South, the West Enders' choice. Construction began in 1910 and the new depot opened on January 1, 1911. Thus ended one of the stormiest episodes of Provo's history. 4 John Clifton Moffit, The Story of Provo, Utah (Provo: Moffit, 1975) 278-279; J. Marinus Jensen, History of Provo, Utah ([Provo: J. M. Jensen], 1924) 333-337. That depot in southwestern Provo was destroyed in 1986. City officials are concerned with the lack of facilities for Amtrak passengers who stop in Provo. For more information, see Christi C. Evans, "Provo Struggles to Build Shelter for Train Travelers," Daily Herald, 21 Sep 1990, B1. In 2002 a new "depot" opened in Provo.

Also during the Frisby administration, a new post office was constructed in 1906. The Provo City Library on the corner of 100 East and Center Street was built in 1907 with funds from Andrew Carnegie. Jesse Knight donated the land for the new library. It was remodeled in 1939 and in the late 1980s became an office building when the new library was built on West Center Street. 5Owen Zuro, "Taylor Was Youngest Mayor of Provo; Commission Setup Inaugurated in 1912," Daily Herald, 5 October 1969, 2.

Frisby served on the high council of the Utah Stake for several years. When he died on November 30, 1915 in Provo, he was the justice of the peace. Services were held in the Provo Third Ward and he was buried in the City Cemetery on December 2, 1915. Frisby's wife died on November 6, 1915. Their survivors in 1915 included three sons and two daughters living in Provo and one son on a mission to Great Britain. Two other children had died earlier. 6Ancestral File; "Former Mayor;" "Mrs. J.H. Frisby."