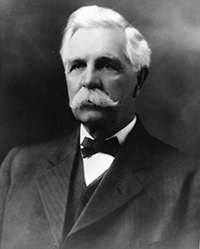 William Martin Roylance was a prominent businessman and civic leader in Utah around the turn of the century. He was born in Springville, Utah on March 31, 1865, the eldest son of William Roylance and Lucy Clucas, both Mormon pioneers born in England. Roylance grew up in Springville, where at age 16 he commenced his business career as a general store clerk. After two years there, he worked for the Denver & Rio Grande Railroad Company for a year and a half. Then he started his own business as a wholesale producer of fruit and other agricultural products. He succeeded for awhile, but in 1893 his business failed. But only two years later his produce operation had rebounded. In Springville he also was a founder and director of the Springville Banking Company. 1Ward J. Roylance, Roylance Family of Western America: The Early Generation (Roylance Family Organization, 1986) 139-146, 148-149; Nobel Warrum, ed., Utah Since Statehood: Historical and Biographical (Chicago: S. J. Clarke Publishing Company, 1919), vol. 3, 482-485; Frank Esshom, Pioneers and Prominent Men of Utah (Salt Lake City: Utah Pioneers Book Publishing Company, 1913) 1144.

In 1900 Roylance moved to Provo, where he established the Wm. M. Roylance Company, Inc. In 1900 his firm occupied the ground floor of 33 East Center Street. The company also had a large warehouse and packing house, with a floor area of 6,250 square feet, on 500 South Street next to the tracks of the Denver & Rio Grande and San Pedro Railways. In the packing season the firm employed about 100 persons to load several railroad cars daily, making it the largest wholesale produce dealer in Utah. The company marketed many kinds of fruit, alfalfa seed, honey, hay, grain, flour, potatoes, cabbage, and general farm produce all over the United States and some part of Europe, Canada, and Mexico. In addition to selling produce raised by others, Roylance owned the largest pear and apple orchards in Utah, including the Spencer Seedless Apple Nursery. His business activities also included being an agent for the Consolidated Wagon and Machine Company of Salt Lake City, owning properties in the Tintic Mining District, and serving as the secretary-treasurer of the Great Basin Oil Company in Emery County, Utah. He was the president of the city's Commerical Club, organized in 1901 to promote and provide information about city businesses. 2 William M. Wilson, Pictorial Provo: An Illustrated Industrial Review of Provo, the Garden City of Utah ([Provo: The Commercial Club], 1910); Roylance 146-148; Esshom 1144.

Roylance served in civic offices for Springville, Provo, and the state. In Springville he was city recorder and councilman. He became Speaker of the House in the third Utah Legislature and served in the House during the second and third sessions of the general assembly. His responsibilities as a state legislator included serving on the Judiciary Committee, on the Committee on Appropriations, and as the chairman of the Ways and Means Committee. Royland was elected chairman of the Democratic State Committee in 1901. He went as a state Democratic delegate to the Baltimore convention which chose Woodrow Wilson to be president. 3 Nobel Warrum, ed., Utah Since Statehood: Historical and Biographical (Chicago: S. J. Clarke Publishing Company, 1919), vol. 3, 482-485.

As mayor of Provo in 1904 and 1905, Roylance was a key figure in obtaining the city's water system. In 1905 the Independent Telephone Company began operations, but it merged with Bell Telephone a short time later. The railroad depot controversy divided the community during the Roylance administration, but was not resolved until a few years later. 4 Owen Zuro, "Taylor Was Youngest Mayor of Provo; Commission Setup Inaugurated in 1912," Daily Herald, 5 Oct 1969, 2. (See Frisby sketch for more details.)