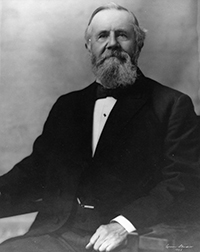 Samuel Stephen Jones, usually referred to as S. S. Jones, began life in Brentford, Middlesex, England on February 9, 1837. His parents were Samuel Jones and Sarah Bradshaw. 1 Ancestral File, BYU Family History Library. This record also indicates Jones' father was Daniel Vincent. No attempt was made to resolve this contradiction. Jones grew up and attended school in Brentford and nearby London. At age 14 he began working in the grocery business in London. About a year later he started working for a tea merchant in London, continuing with them four and a half years.

Several members of the Jones family were Mormon converts. S. S. Jones was baptized April 29, 1851. He and his mother and brother Albert sailed to America on May 26, 1856 on the ship Horizon. They arrived in Boston, took the railroad to Iowa City, Iowa, and crossed the plains in the Martin and Tyler handcart company. S. S. and Albert Jones survived a terrible snowstorm and made it to Salt Lake City in November 1856. The next month they were sent to Provo to be cared for, but still they suffered hunger that winter.

Jones was well known as a prominent Provo businessman. He began his business ventures at Camp Floyd. When he first went there, he made adobe bricks to construct the fort, but soon formed a partnership to provide the soldiers with fresh vegetables. On the heels of this project, Jones became a clerk for retailers Birch & Stubbs operating in Salt Lake City and Camp Floyd. Later he bought out Birch & Robison and formed a partnership with Benjamin Bachman, a Jewish businessman. 3 J. Marinus Jensen, Early History of Provo, Utah (Provo: J. M. Jensen, 1924), 304-305.

Soon Jones became a key figure in the establishment of the territory's first cooperative store begun by the Mormons. In the October 1868 conference a resolution was adopted by the Saints to cooperate and buy from each other and not with outsiders, who would be arriving in throngs with the advent of the transcontinental railroad completed in 1869. Jones decided to work with other Mormons and thus cut his ties with his Jewish partner. In December 1868 church leaders in Provo agreed to form what became known as the Provo Co-operative Institution, or Zions Cooperative Merchandising Institution (ZCMI). Jones was chosen a director and also served as a manager of that church-sponsored business. 4 John Clifton Moffitt, The Story of Provo, Utah (Provo, Utah: John C. Moffitt, 1975), 141; Jensen 1924, 305-311. His duties were interrupted with a mission call to England in 1872. He presided over the Sheffield Conference and edited the church's newspaper Millennial Star for a while. Due to sickness in his family, he returned to Provo and resumed his management position with the Institution until 1876. For about a year he represented a Salt Lake City shoe manufacturer and the Provo Woolen Mills as a traveling salesman. 5 Portrait: Genealogical and Biographical Record of the State of Utah (Chicago: National Historical Record Company, 1902), 324-326.

Jones became a private businessman in 1878 or 1879. His several ventures included providing ties and timber to the Denver and Rio Grande Western Railroad, a cooperative hay business with several prosperous farmers, and Provo's first canning company which lasted only a couple years after starting in 1888. In 1883 Jones built the first general merchandise store on East Main (now University Avenue).

Jones, like many businessmen of his era, invested in mining. He helped develop mines on the east side of the Tintic Mountains and for a while was president of the Sioux and Utah Mining Companies. In addition, he had mining interests in Lincoln County, Nevada. His M. & M. Kilns provided about 20 railroad cars of charcoal per month to mainly the Germania and Hanauer smelters in Cottonwood. 6 Frank Esshom, Pioneers and Prominent Men of Utah (Salt Lake City: Utah Pioneers Book Publishing Co., 1913), 455; Portrait 1902, 324-326; Jensen 1924, 317.

Jones' business ventures were generally successful, but overextending credit and high expenditures led to their collapse in the Panic of 1893. Jones could not pay off his creditors and sold his stock to ZCMI at an auction. 7J. Marinus Jensen, Early History of Provo, Utah (Provo: J. M. Jensen, 1924), 287, 316-317, 331, 334.

With Jones involved in so many businesses, it is not surprising that he was one of the founders of the Provo Chamber of Commerce. On September 10, 1887 the chamber was organized to "boom Provo." Jones was a director of the new business association, which became inactive in the 1890s, replaced by the Commercial Club for a few years, then restarted in 1921. 8 J. Marinus Jensen, Early History of Provo, Utah (Provo: J. M. Jensen, 1924), 381-383.

When Utah became a state in 1896 and politics became based on the two national parties, Jones joined the Republicans but later switched to the Democratic Party. He admired the Democratic leader William Jennings Bryan. In 1898 he ran for the Utah State Senate but was defeated. 11 Portrait: Genealogical and Biographical Record of the State of Utah (Chicago: National Historical Record Company, 1902), 324-326.

Jones made other contributions to Provo. In 1867 the territorial legislature named him and six other men to make up the Provo City Library and Reading Room Association. 12 John Clifton Moffitt, The Story of Provo, Utah (Provo, Utah: John C. Moffitt, 1975), 141; Jensen 1924, 231, citing an 1867 law. Jones was a high priest in the LDS church. 13 Portrait: Genealogical and Biographical Record of the State of Utah (Chicago: National Historical Record Company, 1902), 324-326. Between 1857 and 1878 he married six or seven women. He died on December 27, 1923 in Provo and was buried in the Provo City Cemetery. 14 Ancestral File, BYU Family History Library. This record also indicates Jones' father was Daniel Vincent. No attempt was made to resolve this contradiction.