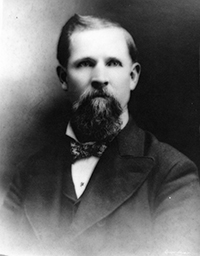 Lafayette Holbrook was born in Salt Lake City on September 7, 1850 to Chandler Holbrook and Eunice Dunning, both born in New York State. 1 "Ancestral File" (n.d.). Provo, UT: BYU Family History Library. His parents had crossed the plains in 1848 with other Saints. In 1851 Chandler Holbrook, a civil engineer, helped found the town of Fillmore in Millard County, where Lafayette was raised and attended school. Later he attended Deseret University, now the University of Utah. 2 "Portrait" (1902) Portrait: Genealogical and biographical record of the state of Utah (pp. 443-444). Chicago, IL: National Historical Record Company.

In Fillmore, Holbrook was a farmer and rancher. He entered the stock business in 1871 by spending about a year in Kansas to purchase cattle. He drove the cattle to Utah and sold them to farmers in the Bear River Valley. On a trip to Illinois and Missouri in the spring of 1872, Holbrook purchased hogs intended for resale in California, but he ended up selling them in Ogden. Holbrook in September 1873 began raising his own cattle bought in Texas and driven back to Millard County. This work was interrupted by a LDS mission from October 1873 to October 1875 in the Manchester Conference in England. When he returned to Fillmore, he found his cattle and property gone. Thus he was forced to begin again. 3 "Portrait", pp. 443-444; "Sketches" (1909). Sketches of the intermountain states together with biographies of many prominant and progressive citizens who have helped in the development and history-making of this marvelous region, 1847-1909 (pp. 156-157). Salt Lake City, UT: Salt Lake Tribune.

It is not surprising that for a while Holbrook worked for someone else, no doubt to build up his cash resources. While he worked in Sanpete and Sevier Counties in 1876 for John W. Lowell in the implement business, Holbrook again became interested in cattle. In 1879 he opened a store in Frisco, Beaver County, under the name of Bennett, Holbrook and Company. In 1883 he bought his partner's share of the business, which he ran by himself until 1887. Holbrook expanded his business interests in 1887 by becoming a charter member of the Consolidated Implement Company. For ten years he was a director of that firm with its headquarters in Salt Lake City. In addition, in 1889 he managed one of the firm's branch offices in Logan.

In 1889 or 1890 Holbrook moved to Provo where he continued his business ventures. Until 1897 he managed the Roberts Hotel and the Cosmopolitan House. He became a prominent person in mining in the 1890s. In 1895 he became one of the founders of the Grand Central Mining Company. He was also president of Victoria Mining Company in the Tintic District and the Ibex Gold and Silver Mining Company in the Detroit District of Millard County, the Tellluride Power and Transmission Company in Provo, and the Hercules Power Company in Logan. Along with Reed Smoot, C.E. Loose, Roger Farrer, J.R. Bean, and George Taylor, Holbrook became a director of the Provo Commercial & Savings Bank organized in 1890. The Holbrook Block in downtown Provo was named after him. 4 Wilson, William M. (1910). Pictorial Provo: An illustrated industrial review of Provo, the Garden City of Utah.

Family and church were important to Mayor Holbrook. He married Emily Angelina Hinckley, the daughter of Ira M. Hinckley, president of the Millard Stake in Salt Lake City on October 9, 1876. They had ten children; one died in infancy. His family lived in a beautiful home on the corner of 200 South and Academy Avenue. Born and raised a Mormon, Holbrook was ordained a seventy in 1869 while living in Fillmore. In 1901 he was ordained a high priest and set apart as a member of the Utah Stake presidency. 5 "Portrait," pp. 443-444.

Holbrook's political career began in Fillmore, where he was elected assessor and collector for Millard County. He served four years as Provo's mayor, from 1894 to 1897, during which time Utah became a state. In Utah's first congressional race in 1896, Holbrook was the Republican nominee for Congress, but he was defeated due to his support of the silver standard. During Holbrook's term as mayor, the Rio Grande Railway's Heber Creeper was built from Provo to Heber City in Wasatch County. 6 Moffitt, John Clifton (1975). The story of Provo, Utah (p. 125). Provo, Utah: John Clifton Moffitt.

Most of this sketch comes verbatim from David M. Walden, Biographical Sketches of Former Mayors of Provo, Utah: A Report to the Provo Municipal Government, October 1, 1990, 42-44.