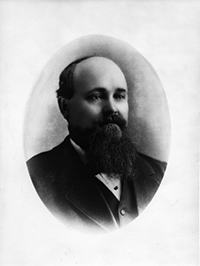 Born in Whitehaven, Lucerne County, Pennsylvania on November 1, 1836, Warren N. Dusenberry was the third of nine children born to Mahlon Dusenberry and Aurilla Coray. In 1840 the family moved to Pike County, Illinois, where Aurilla Dusenberry joined the LDS church. In 1860 the family moved to Los Angeles, California and then to Sacramento. In 1862, Mrs. Dusenberry decided to move to Provo to avoid the worldly California atmosphere. She took two sons, Warren and Wilson (another Provo mayor), and two daughters, Mary Ann and Martha Jane. Mahlon Wilson never became a Mormon and remained in California with his son John, who later moved to Provo.

In Provo, Warren Dusenberry was hired by the Provo First Ward to teach school, his first experience in an outstanding career in education. He also taught for two years in a small grade school. In 1865 he was a merchandiser, and in 1867 served a mission in the southern and middle states. He was also an immigration officer for the Saints migrating from New York to Utah in the fall of 1869.

Back in Provo, Warren and his brother Wilson Dusenberry started the Dusenberry school on Center Street in the Kinsey Building, then expanded the elementary program to the Lewis Hall partly owned by Brigham Young. This program impressed several territorial education officials, who requested it become a branch of the University of Deseret. This Timpanogos Branch of the university lasted from April of 1870 to May of 1875, then became an integral part of the new Brigham Young Academy founded the same year.

BYA's Board of Trustees appointed Dusenberry to be its first principal, and in January 1876 he assumed that responsibility over 97 students. He served there until the first term ended on April 15, 1876. 1 "Treatise" (1971, June-July). Treatise documents service of first principal of BYA. Friends of the Brigham Young University Library, pp. 2. He resigned to fulfill his duties as a private lawyer, prosecuting attorney for Utah County, and city attorney for Provo City. He was succeeded by Dr. Karl G. Maeser as the principal of BYA. His great-grandson, Robert K. Dusenberry, spent several years proving Warren was the first principal of BYA. His booklet, Warren N. Dusenberry: Prominent Utah Pioneer, Educator, Judge, and Public Servant, was the main source for this sketch. 2Dusenberry, Robert Kelly (1971). Warren Newton Dusenberry: Prominant Utah pioneer, educator, judge, and public servant, 1836-1915. Accessible in print at the Provo City Library.

Dusenberry spent 24 years in Utah's judicial system. He left education to defend John Baun, an old respected citizen of Utah County who was being accused of killing Richard Brown for seducing Baun's niece and not being willing to marry her. Baun was acquitted twice. From 1874 to 1889 Dusenberry was the probate judge of Utah County. Soon he became the judge of the Fourth Judicial District and remained there until 1898.

One of Dusenberry's major contributions was helping start the new Territorial Insane Asylum in Provo. He wrote the bill and urged the state legislature to create the new institution. He was its first board president. In 1885 he and Dr. Walter R. Pike traveled to eastern states to learn the best methods of running the asylum, now called the Utah State Hospital. 3Dusenberry, pp. 20-22. Judge Dusenberry in 1890 was soundly defeated in his attempt to be elected mayor of Provo. But in the next election Democrat Dusenberry defeated Republican Reed Smoot and Liberal Henry W. Davis. He was Provo's mayor in 1892 and 1893. 4 "Historical Data" (1969). In Provo City Ordinances (p. 296); Pardoe, T. Earl (1989). The Sons of Brigham (p. 65). Provo, UT: Brigham Young University Alumni Association. During his administration the office of alderman was abolished and the first building of the Academy Square was dedicated. An important health milestone occurred in 1892 when the first water pipes were built in Provo, using mostly wooden pipes. 5Moffitt, John Clifton (1975). The Story of Provo, Utah (p. 285).

He married Adalaide Webb on June 18, 1865, in Payson and later they were sealed in the Endowment House in Salt Lake City. Soon after his marriage, he was hurt financially in a lawsuit involving a street railway in Provo. In the early 1900s, Dusenberry and his family moved to San Francisco. He died on March 30, 1915 at age 79, the victim of an axe attack by his son Grover. 6Pardoe, p. 65. His survivors included seven children and his widow.

Most of this sketch comes verbatim from David M. Walden, Biographical Sketches of Former Mayors of Provo, Utah: A Report to the Provo Municipal Government, October 1, 1990, 39-41.