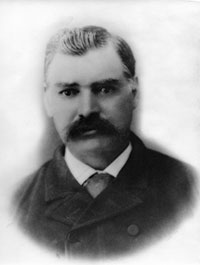 The son of Richard T. Booth and Elsie Edge was born in Lancashire, England on June 29, 1847. His father was a teacher until he lost his job because he joined the Mormon church. In 1857, Mr. and Mrs. Booth, with their ten-year old son John and three other children, crossed the Atlantic to join other Mormons. Soon after arriving in Salt Lake City, the family fled because of an invading U.S. Army. In 1858, they settled in Alpine, northeast of American Fork. It was there that Richard Booth became a respected teacher, superintendent of the cooperative store, justice of the peace, and high priest in the LDS church. 1"Portrait" (1902). Portrait: A Genealogical and Biographical Record of the State of Utah. Chicago, IL: National Historical Record Company.

Like other young men of that era who wanted legal training, Booth studied law in an apprenticeship system. In his case, he studied in his spare time with John B. Billner of Provo. In 1875, Booth was admitted to the Bar of the First Judicial District, beginning a distinguished law career. His private practice included partnerships with George M. Brown from 1876 to 1887 and L.A. and E.A. Wilson for four years beginning in 1887. Clients were accepted if they were not able to pay. Booth taught law and civil government as a volunteer at the Brigham Young Academy for at 30 years. Karl G. Maeser appointed Booth to be the chairman of the Mathematics Department in the new Brigham Young Academy, a good indicator of Booth's interdisciplinary abilities.

Booth served as Provo's mayor in 1890 and 1891. In the campaign against his rival George Sutherland, a heckler asked how Booth expected to be mayor while living in a small adobe house. Booth's humorous answer, which essentially ignored the question, helped him to gain popularity and win the election. One of the most important developments of his administration was the December 15, 1890 ordinance creating the Provo City Fire Department. 5 Garrity, Anton (1900, 8 July). Provo Fire Department Marks Centennial. Daily Herald, pp. E1; "Historical Data"; Pardoe, pp. 7-10.

Business ventures also took the time of Booth. He was president of Western Union and Blue Cliff Canal Company, vice president of Provo Building and Loan and also Taylor Paper Company, and director of the Provo Woolen Mills, First National Bank of Provo, the Provo Cooperative Mercantile Institution, and the Provo Lumber and Building Company. 6 Portrait, 296-298.

For many years Booth was a local leader of The Church of Jesus Christ of Latter-day Saints. In 1875 or 1876 he became a counselor to Bishop Harvey H. Cluff of the Provo Fourth Ward. From 1877 or 1878 to 1895 he served as bishop of that ward. Twice Booth was in the presidency of the Northern States Mission first in 1883, then again in 1889. In July 1900 he was chosen the president of Utah Stake's High Priest Quorum. 7Portrait, 296-298; Pardoe, 7-10. Both these sources place Booth in the presidency of the Northern States Mission in the 1880s, but that seems to conflict with the dates when was bishop of the Provo Fourth Ward.

Most of this sketch comes verbatim from David M. Walden, Biographical Sketches of Former Mayors of Provo, Utah: A Report to the Provo Municipal Government, October 1, 1990, 35-38.