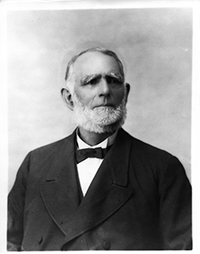 In 1828 Smoot moved with his family to Benton County, Tennessee, where seven years later he became a member of the Mormon Church. Soon he was placed in charge of a small LDS congregation where he remained until February 1836. Later he accompanied Elder Wilford Woodruff on a short mission in Kentucky and Tennessee. 2Melva Richey, "Biography of Abraham O. Smoot," typescript, 1, Special Collections, Harold B. Lee Library, Brigham Young University, Provo, Utah, MSS 896. After completing this mission, they traveled to Kirtland, Ohio and attended school during the winter.

In 1838 Smoot traveled with other Saints to Far West, Missouri. With a surveyor he laid out the town of Adam-ondi-Ahman. Angry mobs captured A. O. Smoot, and along with other Mormons he spent time in jail. 3 Pardoe; Portrait: Genealogical and Biographical Record of the State of Utah (Chicago: National Historical Record Company, 1902), 344-345.

After leaving Missouri, Smoot moved to Quincy, Illinois and then Nauvoo. There he helped build the temple and was one of the first to conduct temple ordinances. He went on another mission in the South and prepared members for the trek west. Smoot led a company that left Nauvoo and traveled to Winter Quarters.

After arriving in Utah, he became the bishop of the Salt Lake Fifteenth Ward. He was named the first territorial justice of the peace. He held this position during the turbulent years of the California Gold Rush and thus heard many cases. He also captained a wagon train of supplies and merchandise to the Salt Lake Valley, the first to cross the plains for this purpose.

In Provo there were major problems by the beginning of 1868. Both the civil and church administrations were in a "disturbed and weakened condition." A good indicator of that disunity was the petition to the Territorial Legislature to divide Utah County into two counties. New leadership was needed. Thus on 31 January 1868, Brigham Young nominated A. O. Smoot to be a bishop and mayor of Provo and president of the Utah Stake. He held the latter position for the remainder of his life. He was elected mayor of Provo on 10 February 1868 and held that office until the end of 1881. 5 "Historical Data," Provo City Ordinances 1989, 295-296.

Mayor Smoot was responsible for many projects during his administration. One of his first undertakings was to build a road connecting Provo with Heber City. He organized the first cooperative mercantile store in Utah County in 1869 and later the Provo Woolen Mills. He was one of the organizers of the First National Bank of Provo and a principal stockholder in the Utah County Savings Bank. 6 Andrew Jenson, Latter-day Saint Biographical Encyclopedia: A Compilation of Biographical Sketches of Prominent Men and Women in the Church of Jesus Christ of Latter-day Saints (Salt Lake City: Andrew Jenson History Company, 1901-1935), vol. 1, 485-487; Berlin, 88-89. He sent many teams of workers to Lehi to aid in the building of a rail line from Lehi to Provo.

One of Smoot's major projects was the building of the Provo Tabernacle, which started in 1881. He was so committed that he mortgaged his own home to raise the funds required for its construction. 7 Anna Smoot Taylor, interviewed by Carla Morris, July 14, 1988, transcript in the Provo City Library, Provo, UT.

As president of the original trustees of Brigham Young Academy, Smoot rendered one of his most enduring contributions to Provo. For nearly 20 years he fulfilled Brigham Young's request " ... to take hold of the school, help it with your influence, and call upon people to patronize it." 8 Melva Richey, "Biography of Abraham O. Smoot," typescript, 5, Special Collections, Harold B. Lee Library, Brigham Young University, Provo, Utah, MSS 896. BYU's administration building is named after A. O. Smoot.