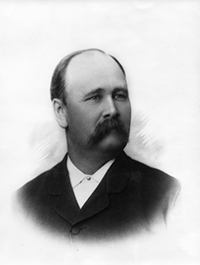 Wilson Howard Dusenberry, a prominent Utah educator, businessman, and government official, was born in Perry, Pike County, Illinois on April 7, 1841. He and his brother Warren went with their parents Mahlon Dusenberry and Aurilla Coray to California. But Mrs. Dusenberry had never wanted to be in California, so in 1860 she and her children moved to Utah to be part of the main body of Saints. Mahlon Dusenberry remained in Sacramento, where he died in 1899.1 T. Earl Pardoe, The Sons of Brigham (Provo: Brigham Young University Alumni Association, 1969), 66-67.

Wilson and Warren Dusenberry started teaching in the 1860s. Their small school in 1870 became an integral part of a local branch of the University of Deseret and then the church-supported Brigham Young Academy (BYA). He became disillusioned with the school as part of the poorly financed University of Deseret, so in 1874 he became superintendent of schools in Utah County. In that position until 1880, Dusenberry extended classroom instruction to parts of the country previously untouched. He played a significant role in the early years of Brigham Young Academy and served on the Board of Trustees from 1883 to 1921. In 1876 Superintendent Dusenberry convinced the County Court to provide tuition for 26 Utah County students to attend the new BYA, a program that lasted several years. 2 Pardoe, 66-67.

Several major changes occurred while Dusenberry was mayor. The Denver and Rio Grande Railroad reached Utah County in 1882. The city's first telephone service occurred on June 14, 1883, then was extended to Salt Lake City in 1887. In 1889 the City Council approved Rocky Mountain Bell Company's request for a 20-year franchise to operate in Provo. 5 John Clifton Moffitt, The Story of Provo (Provo, Utah: J.C. Moffitt, 1975), 128-129.

Dusenberry was mayor on January 4, 1883 when the BYA burned down. He proposed to the City Council that a fire department be created. Lack of funds resulted in volunteer firemen working together until 1890, when the Fire Department was created under his successor, Mayor John E. Booth. 6 Pardoe, 66-67.

When the Provo Lumber, Manufacturing, and Building Company was incorporated in 1879, Dusenberry was chosen its secretary. This firm built the Provo Theater, the First National Bank building, the Parker School, the Stake Tabernacle, the south wing of the new State Hospital, and other local buildings. In 1898 it became the Smoot Lumber Company. 7 J. Marinus Jensen, Early History of Provo, Utah (Provo: J. M. Jensen, 1924), 279-280.

Dusenberry's other activities included being cashier of the First National Bank of Provo from 1882 to 1891. 8 Jensen, 325. Then he became cashier at the Utah County Savings Bank from 1891 to 1901. Dusenberry from 1901 to 1913 was Provo's assistant postmaster. He was the treasurer of the city's first canning company started in 1888. 9 Jensen, 287. When the Provo Chamber of Commerce was first organized in 1887, Dusenberry was its first president. 10 Jensen, 381. He supported the arts, for he was a founder and secretary-treasurer of the Provo Theater Company organized in 1883. This organization built the Provo Opera House on First West between Center Street and First North. Mayor Dusenberry was not baptized into the LDS church until the mid-1860s when he was about 25 years old. 11 Wilson Howard Dusenberry, "Diary," University of Utah Marriott Library Special Collections, Salt Lake City, Utah, summary in Davis Bitton, Guide to Mormon Diaries & Autobiographies (Provo, Utah: Brigham Young University Press, 1977), 95. In 1878 he began serving on a High Council. He retained a keen interest in the BYA and its successor Brigham Young University, serving on its Executive Board in his later years. 12 Pardoe, 66-67.

Most of this sketch comes verbatim from David M. Walden, Biographical Sketches of Former Mayors of Provo, Utah: A Report to the Provo Municipal Government, October 1, 1990, 31-34.