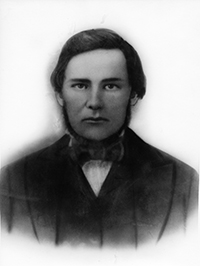 Andrew Hunter Scott was born to Joshua Scott and Nancy (or Ann) Keen in Hulmeville, Middletown Township, Bucks County, Pennsylvania on August 22, 1815. His father was a well-to-do farmer. At age 18, Andrew learned the trade of a tailor. He moved to New Jersey and set up his own tailor business. 1 Lorraine Holman, "Andrew Hunter Scott," typescript biographical sketch, in her possession (1990).

On February 18, 1838 Scott married his first wife, Sarah L. Sleeper from New Jersey. Soon after his conversion to Mormonism in 1843, he went on a mission to Philadelphia and the surrounding countryside. He served another mission to southwestern New Jersey in 1845, at which time he and Jedediah M. Grant reorganized the Woodstown Branch. 2 Andrew Jenson, Latter-day Saint Biographical Encyclopedia: A Compilation of Biographical Sketches of Prominent Men and Women in The Church of Jesus Christ of Latter-day Saints (Salt Lake City: Andrew Jenson History Company, 1901-1935), vol. 2, p. 7-8.

In the fall of 1845, together with his wife and other Mormons, Scott traveled to Nauvoo, Illinois. He left for the West in 1850, but his first wife refused to accompany him. He and two sons located temporarily in Pottawattamie County, Iowa, where on January 12, 1851 he married his second wife, Sarah Ann Roe. 3 Jenson, vol. 2, p. 7-8. Scott's second wife sometimes used the surname Umphrey.

Scott arrived in the Salt Lake Valley in 1851 and the next year moved to Provo, his home until his death in 1874. A successful farmer and sheep importer, he was instrumental in building the Provo Woolen Mills from 1870 to 1873. Scott also made brooms and worked in beekeeping and silk worm culture. He planted the first fruit trees in Utah County. In 1859 he became the first director of the Deseret Agriculture Society of Utah County. 4 Lorraine Holman, "Andrew Hunter Scott," typescript biographical sketch, in her possession (1990).

Scott was a member of the Nauvoo Legion and took part in the Echo Canyon campaign and other military affairs in Utah Territory. In 1861 he was called to serve as bishop of the Provo Second Ward, a position he held until he died. 5 Andrew Jenson, Latter-day Saint Biographical Encyclopedia: A Compilation of Biographical Sketches of Prominent Men and Women in The Church of Jesus Christ of Latter-day Saints (Salt Lake City: Andrew Jenson History Company, 1901-1935), vol. 2, p. 7-8.

Scott's service to his community included being city recorder, assessor, collector, treasurer, and water master. In 1856 he helped supervise construction of the Old Tabernacle, or as it was called, the Provo Meeting House. He also supervised the erection of the court house from 1860 to 1861.

When the Honorable Ebenezer Hanks resigned as Provo mayor at a council meeting on July 6, 1861, a motion was unanimously approved that Andrew Hunter Scott be mayor of the city. When elections were held in February 1863, he chose not to run for re-election. 6 Lorraine Holman, "Andrew Hunter Scott," typescript biographical sketch, in her possession (1990).

On October 11, 1874 Scott died suddenly in his home. His children maintained the family heritage in Provo, although some moved to other areas. For example, the Andrew Hunter Scott farm, begun in 1874, still stands at 1160 West 600 South. 7 Craig M. Call, Provo Historic Buildings Tour [booklet] (Historic Utah, Inc., 1979). The farm may be named for his son, Andrew Hunter Scott, Jr. See Portrait: Genealogical and Biographical Record of the State of Utah (Chicago: National Historical Record Company, 1902). Seventeen of his 24 children married and had children. Their descendants in 1967 formed the Andrew Hunter Scott Genealogical Association. The association publishes a semiannual newsletter and has established a special collection in the BYU Library dealing with their ancestor and his approximately 10,000 descendants. 8 The president of the Andrew Hunter Scott Genealogical Association in 1990 was John C. Laing, a communications specialist at BYU.

Most of this sketch comes verbatim from David M. Walden, Biographical Sketches of Former Mayors of Provo, Utah: A Report to the Provo Municipal Government, October 1, 1990, 17-19.