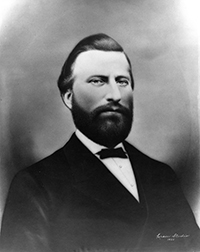 Isaac Bullock was born in Grafton, New Hampshire October 23, 1825. Soon after he was born, his parents, Benjamin Bullock III and Dorothy Kimball, moved to the city of Moire in Upstate New York. There, most family members first heard about the Mormon religion and were converted. However, Isaac Bullock was in New York City attending law school. When he returned, his family had already moved to Nauvoo, Illinois with the rest of the Saints. That is where Bullock joined the Mormon church.

Soon after his conversion, Bullock was called to serve a mission in Chicago. There he developed a lifelong friendship with Abraham O. Smoot. After his return from Chicago, the Bullock family left Nauvoo, along with the rest of the Mormons, and went to Council Bluffs, Iowa where they stayed until 1852.

Bullock was named captain of 40 wagons and crossed the plains in 1852. Along the way he was able to baptize his father and perform the marriage of his brother. Isaac arrived in Provo on September 21, 1852 and was soon called to help settle Fort Supply in Wyoming, 12 miles from Fort Bridger. 1 Isaac Bullock Diary 1854-1856, University of Utah Special Collections, Ms 5, summary in Davis Bitton, Guide to Mormon Diaries & Autobiographies(Provo, Utah: Brigham Young University Press, c1977). He became the president of that community. He learned the Shoshone language and became their friend. Bullock left Fort Supply because of the arrival of Johnson's army. He was part of a posse of 40 men appointed to find Utah Chief Tintic in 1856. 2 J. Marinus Jensen, Early History of Provo, Utah(Provo: J. M. Jensen, 1924), 113.

While at Fort Supply, Bullock was elected to the Territorial Legislature. On his way to the territorial capital of Fillmore, he met and married his first wife Electa Wood on December 4, 1856. The following year he married Emma Stott. He returned with his two wives to Fort Supply. Between the two wives Isaac Bullock eventually had 18 children. 3 Frank Esshom, Pioneers and Prominent Men of Utah(Salt Lake City: Utah Pioneers Book Publishing Company, 1913), 779.

When Bullock returned to Provo in 1858, Brigham Young asked him to open the first hotel south of Salt Lake City, since there was no place for visitors to stay in Provo. Bullock and his two wives opened a hotel located on Fifth West and Center Street. He owned this hotel for nearly 30 years before selling it. During those years the Bullock Hotel was the leading hotel in Provo.

Abraham O. Smoot, a personal friend, said the following of Isaac Bullock: "For twenty years we have been associated in this stake of Zion. Brother Bullock's word was as good as his bond." 12 A. O. Smoot I, remarks at funeral of Isaac Bullock, cited in Clark T. Leavitt and Norma Bullock Leavitt, compilers, The Story fo Ernest Kimball Bullock: His Life, His Family, His Times(Calgary, Alberta: Eat Your Heart Out Publishing Company, 1984), 50. He died of pneumonia in 1891, at the age of 66. At his funeral several prominent men, including S. S. Jones and H. H. Cluff, spoke about Bullock's contributions and integrity. 13 "President Isaac Bullock Called Home," typescript, University of Utah Special Collections, Ms 50, Box 52, Folder 2.

Most of this sketch comes verbatim from David M. Walden, Biographical Sketches of Former Mayors of Provo, Utah: A Report to the Provo Municipal Government , October 1, 1990, 20-23.