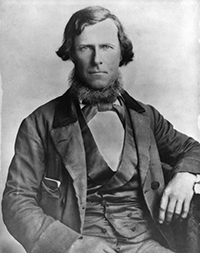 Ebenezer Hanks, often referred to as Eb, was born in February 1815 in Argyle, Washington County, New York to Joseph Hanks and Almira Kennedy. Hanks grew up in the nearby small towns of Greenwich and Salem. His father was a prosperous farmer and tavern keeper. At age 16 or 17, Ebenezer left home after a family quarrel and never returned to live with his parents. In 1838 he was elected town collector for Salem. By February 1839 Hanks was living in Adams County, Illinois, where three families from back in Washington County had settled. On October 27, 1839 Hanks married his first wife, Jane Wells Cooper. 1 Kerry William Bate, The Ebenezer Hanks Story (Provo, Utah: M.C. Printing, 1982), 1-6.

In the winter of 1839-1840, hundreds of Mormons were driven out of Missouri. In Adams County many of these families were befriended by the local residents, including possibly Eb and Jane Hanks. By about 1841 the young couple had converted to the LDS church, but they remained in Adams County while the main body of Saints moved to Nauvoo. Eb and his wife were sealed in the Nauvoo Temple in 1846 before leaving on the trek west. 2 Kerry William Bate, The Ebenezer Hanks Story (Provo, Utah: M.C. Printing, 1982), 1-7-10.

Both Eb and Jane Hanks joined the Mormon Battalion, he as a sergeant and she as a cook and washerwoman. Hanks became the champion wrestler in the camp. When the unit reached Santa Fe, New Mexico in October 1846, the couple went with some of the sick to spend the winter in Pueblo, Colorado. In the spring of 1847 they headed for Salt Lake Valley and arrived just a few days after the first settlers. 3 Kerry William Bate, The Ebenezer Hanks Story (Provo, Utah: M.C. Printing, 1982), 1-11-18.

Hanks played an important role in the settlement of San Bernardino, California in the early 1850s. He became friends with several prominent LDS leaders and saved enough money to go into business when he returned to Utah. By January 22, 1860 when Hanks married his plural wife Sarah Jane Casper, he had become a prosperous merchant, with stores in Provo, Parowan, and Beaver. His teams regularly traveled to and from California. 4 Kerry William Bate, The Ebenezer Hanks Story (Provo, Utah: M.C. Printing, 1982), 1-25-37, 46-49.

On February 11, 1861 Hanks was elected mayor of Provo and was sworn in on February 22 by Mayor Benjamin K. Bullock. In his initial speech at the first city council meeting of his administration, Hanks mentioned the need for better community facilities (schools and a jail) and denounced liquor. The next month the council agreed with several LDS bishops on the wisdom of restricting liquor sales, so an 1855 liquor law was repealed. Because water concerns were of paramount importance, a local man was chosen to be the water supervisor. Hanks' businesses probably were the reason he missed three of the five meetings in March 1861. Not being able to fulfill his civic duties, Hanks resigned as mayor on July 6, 1861. The next week he came to the council meeting to introduce the new mayor, Andrew H. Scott, to his duties. After only five months in office, Hanks political career had come to an end. 5 Kerry William Bate, The Ebenezer Hanks Story (Provo, Utah: M.C. Printing, 1982), 1-41-43.

Hanks played a key role in the early cotton industry in Utah's southern area known as "Dixie." In 1857 Brigham Young sent 10 families to Washington County where they were quite successful in starting cotton crops. In 1861, 300 new families were sent to aid the small colony. The same year Brigham Young asked Eb Hanks and his Parowan business partner to start a cotton factory in cooperation with other Mormons and at the same time end his capitalistic trading ventures. On February 26, 1862 the Parowan cotton factory produced its first yarn. But it closed in 1866 when cotton prices plummeted after the end of the Civil War. Hanks remained in Parowan, still having a store there. He also had diversified by building a sawmill in Parowan Canyon.

Another contribution was promoting iron mining in Iron County. On June 12, 1868 he became the president of the Union Iron Company, which was reincorporated using LDS cooperative principles on August 16, 1870 as the Utah Iron Mining Company. At its peak the company's blast furnaces made five to seven tons of pig iron daily. Hanks was the main investor in this venture, so for a while he prospered but went bankrupt when it failed. 6 Kerry William Bate, The Ebenezer Hanks Story (Provo, Utah: M.C. Printing, 1982), 1-67-72.

In 1870 Hanks moved his family to Iron City, but his wife Jane remained in Parowan. She had become disaffected from the Mormon faith and in Parowan held spiritualist meetings and séances, sometimes attended by a family friend, Apostle Amasa Mason Lyman. Although Hanks had sometimes disagreed with LDS leaders, he disapproved of these spiritualist activities which contributed to apostasy in pioneer days. 7 Kerry William Bate, The Ebenezer Hanks Story (Provo, Utah: M.C. Printing, 1982), 1-70-71. In 1870 he was appointed by the LDS-dominated Territorial Legislature to be the probate judge of Piute County. He had mining investments there, so he could take care of both business and judicial responsibilities during trips to that county. However, in 1871 Hanks resigned or was replaced as probate judge.

The last contribution of our subject was the founding of Hanksville, Wayne County, Utah. Although a few individuals lived in what was originally known as Graves Valley, Hanks' family and a few other families were the first to settle the area in 1882. They built log homes and got water from the nearby Fremont River. Hanks was the first presiding elder there. He was also the first to die in the small community. He died in April 1884 at age 69. His grave in Hanksville was marked by a large tombstone purchased by Apostle Francis M. Lyman. 8 Ida M. Weber, "Hanksville," In: Rainbow Views: A History of Wayne County, Anne Snow, compiler, 3rd ed. (Springville: Art City Publishing Company, 1977), 298-303.

Hanks had only a minor role to play in Provo politics. His life does however provide insight into early merchandising in Utah, for he was "a capitalist when Mormons practiced cooperation, and to some extent that interfered with his success." His biographer concluded Hanks was a devout Mormon who made significant contributions to early Utah exploration and colonization, the first cotton factory, and iron mining. 9 Kerry William Bate, The Ebenezer Hanks Story (Provo, Utah: M.C. Printing, 1982), Introduction.

Most of this sketch comes verbatim from David M. Walden, Biographical Sketches of Former Mayors of Provo, Utah: A Report to the Provo Municipal Government, October 1, 1990, 13-16.