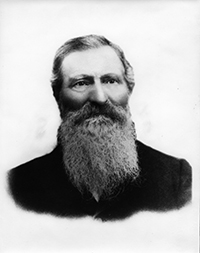 Benjamin Kimball Bullock, usually referred to as Kimball, was born in Grafton, New Hampshire, on January 27, 1821, the son of Benjamin Bullock and Dorothy Kimball. He soon moved with his family to Moira, New York, where they were converted to Mormonism. In 1844 the Bullock family moved to Nauvoo, Illinois, where Benjamin and his father worked on the Nauvoo Temple. In 1846 the family moved to Hancock County and were driven away by a mob that destroyed their home and property. On May 1, 1846, Benjamin Kimball Bullock and his family crossed the Mississippi and moved to Council Bluffs, Iowa. In 1851 he married the first of his three wives, Martha E. Hart. His other two wives were Emily Bailey and Ann Sykes. Between these wives he had 17 children. 1 "Obituary of Benjamin Kimball Bullock, 22 Mar 1901, Provo, Utah, from Clark T. Leavitt and Norma Bullock Leavitt, compilers, The Story of Ernest Kimball Bullock: His Life, His Family, His Times (Calgary, Alberta: Eat Your Heart Out Publishing Company, 1984), 35-36; Frank Esshom, Pioneers and Prominent Men of Utah (Salt Lake City: Utah Pioneers Book Publishing Co., 1913), 779.

Bullock was a member of the Isaac Bullock company of pioneers that arrived in Provo on September 20, 1852. He was a farmer by occupation and the family owned about 1,000 acres on the east side of town on the road to Springville (Highway 89). He and his brother Isaac farmed and raised cattle, sheep, and horses. Morgan horses were their special breed. Kimball lived in a large brick house on the east bench overlooking his estate near Springville. Two of his wives lived in Provo.

Benjamin Kimball Bullock was called on a mission to settle the Muddy River area in northern Nevada in 1868 by Brigham Young. 2 J. Marinus Jensen, Early History of Provo, Utah (Provo: J. M. Jensen, 1924), 160. He stayed there almost two years before being called back to Provo by Brigham Young. Benjamin did not like the hot climate and drifting sand which made farming difficult. In his first wife's journal, she made the following entry after arriving in Nevada, "I love and respect Brother Brigham, but sometimes I damn his judgement." 3 Leavitt and Leavitt, 35.

Bullock served three consecutive terms as mayor for the City of Provo, from 1855 to 1860. He assisted in the erection of several public buildings and promoted several public enterprises, including roads built in Rock Canyon and Provo Canyon. He played an important role in the building of the first canal to the Provo Bench (present day Orem) and the East Union Ditch. By providing much needed water to the eastern part of Provo, this opened new portions of the city for settlement. By the end of Bullock's third term, Provo had grown to approximately 2,000 persons. Bullock finished the term of his brother Isaac Bullock, who resigned as Provo's mayor after being called on a church mission to England in 1863. He also served as a city councilman in 1864 and 1865. 4 "Historical Data," Provo City Ordinances (1989), 296; Owen Zuro, "Schoolhouse in Fort Utah First Meeting Place of Provo Council," Daily Herald, 1 Oct 1969, 4.

While Bullock was mayor in the second half of the 1850s, the Mormon Reformation occurred, with many members rebaptized and religious zeal encouraged. Thousands left Salt Lake City because of the threat of an invading federal army. During "The Move," Provo became the largest community in the territory. After the Utah War, federal Judge John Cradlebaugh convened his court in Provo in 1859 to prosecute alleged crimes by Mormons. He brought in federal troops who stayed in the city-owned courthouse, without the permission of Mayor Bullock or other city officials. Bullock protested the presence of the troops, but Judge Cradlebaugh ignored him. The judge criticized Mormons who blindly followed tyrannical church leaders. He and the troops finally left after a period of considerable tension and controversy. 5 J. Marinus Jensen, Early History of Provo, Utah (Provo: J. M. Jensen, 1924), 137-150.

Bullock was known as a kind and generous man. According to a story told by Vern Bullock, Kimball Bullock early one morning looked out in his hayfield and saw some gypsies loading up their wagon with his hay. He picked up a pitchfork and walked over to them. When they saw him coming, they started to run away. Bullock told the gypsies to stay and finish loading their wagon. He said, "Here, hold it boys, looks like you only got about a quarter of a load. We better load you up." After loading up their wagon, he told them if they ever needed anything else, they were free to come back and help themselves. 6 Leavitt and Leavitt, 29.

Most of this sketch comes verbatim from David M. Walden, Biographical Sketches of Former Mayors of Provo, Utah: A Report to the Provo Municipal Government, October 1, 1990, 10-12.