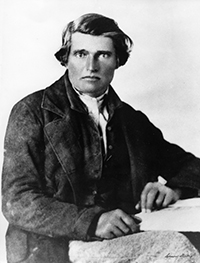 Green arrived in Utah on October 12, 1852 with the Allen Weeks Company. He was a farmer, merchant, stockraiser, and school teacher. A Latter-day Saint, Green served as a missionary to the eastern states and as a patriarch and high councilor. 2 Esshom, vol. 2, 899; John C. Moffit, The Story of Provo, Utah (Provo: John C. Moffit, 1975), 151.

Mr. Green played a role in the first efforts to use the Provo River. In 1853 the territorial legislature created the Provo Canal and Irrigation Company The Provo Canal and Irrigation Company was created in 1853 by the Utah Territorial Legislature. The Company was given one half of the water of the Provo River to manage for purposes of irrigation and generation of power. . Orson Hyde, George A. Smith, and George W. Armstrong were the main organizers of that company, but Evan Green, Dominicus Carter, Edson Berney, and David Canfield also were associated with it. 3 John C. Moffitt, The Story of Provo, Utah (Provo: J. C. Moffit, 1975), 79.

Green was Provo's second mayor, serving in 1853 and 1854. One of the major difficulties faced by the community at the time was the Walker Indian War, named for Ute leader Walker or Wakara. An incident involving the death of an Indian in the summer of 1853 at the Provo Fort helped lead to the conflict. Brigham Young put George A. Smith in charge of the Mormon militia south of Salt Lake City. Fighting occurred throughout Utah County and even as far south as Sanpete County. On July 21, 1853, the Provo City Council declared martial law and special efforts were begun to preserve the community's food reserves. Because of the war, building a wall around Provo was a major concern of local residents in 1853 and 1854. An August 1854 ceremony and feast in Provo, attended by 200 Indian visitors, marked the end of hostilities. 4 J. Marinus Jensen, History of Provo, Utah (Provo: J. M. Jensen, 1924), 88-101, 104.

Other municipal developments during the Green administration included appointing policemen under the direction of Marshal James C. Snow, the police captain. A general property tax of four mills per dollar was initiated. In addition, school trustees were given authority to raise money for school buildings. Property owners were required to donate to build roads or irrigation ditches, or pay a fee to the city treasury. In June 1853 the city made plans for what is now North Park and the City Cemetery. 5 J. Marinus Jensen, History of Provo, Utah (Provo: J. M. Jensen, 1924), 84-87.

Most of this sketch comes verbatim from David M. Walden, Biographical Sketches of Former Mayors of Provo, Utah: A Report to the Provo Municipal Government, October 1, 1990, 8-9.