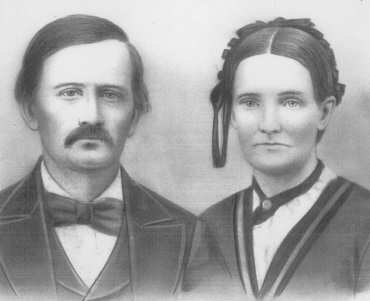 Ellis Eames was born on 19 January 1809 in Mentor, Geaugh County, Ohio. He joined the LDS church and was ordained an elder in Jackson County, Missouri. In 1834 he was the president of a conference in Clay County, Missouri. He also received a mission call while living in Nauvoo in 1844.1 Susan Easton Black, Membership of The Church of Jesus Christ of Latter-day Saints 1830-1848. (Provo: BYU Department of Church History and Doctrine, Religious Studies Center, 1989), 14:923.

Eames and his wife Olive had at least seven sons. The oldest two, Ansel M. and another brother, were born in Missouri. The next four, Ellis Jr., Dan A., Cyrus, and Carlo, were born in Iowa. Only their youngest son, Octavus, was born in Utah Territory. In the 1851 Utah Federal Census Eames was listed in Utah County as a fiddler with a household of ten and $200 in real wealth.21851 Utah Federal Census.

Eames was among the first party of Mormon pioneers headed for Salt Lake Valley, but President Brigham Young sent him back due to illness. Eames later came to Provo, but was not among the first colonizers who arrived in 1849.3 Owen Zuro, "Schoolhouse in Fort Utah First Meeting Place of Provo Council," Daily Herald, October 1, 1969, 1.

Although Provo was first settled by Mormons who built a fort near Utah Lake, it did not receive a city charter from the territorial legislature until February 6, 1851. It set the new community's boundaries and specified general rules under which it would be governed. Officials were to be elected by "free white male inhabitants" who had resided at least 60 days in Provo.4 John Clifton Moffitt, The Story of Provo, Utah (Provo, Utah: J. C. Moffitt, 1975), 264-266.

The mayor and city aldermen acted as justices of the peace in civil and criminal cases. Together they made up the Municipal Court. Appeals could be made from the Municipal Court to the Utah County Probate Court.6 J. Marinus Jensen, Early History of Provo, Utah (Provo: J. M. Jensen, 1924), 78-79.

The first law passed during the Eames administration reflected the priority of the city's first officials. It required all able-bodied men over 18 to work at least one day a year on public roads or pay a $2 fine to the city treasury. Other early laws dealt with timber use, mandatory fences for landowners, the first sales tax, escaping animals, and water rights. Since the settlers of Provo were Mormons, it is not surprising to find other early laws requiring penalties for Sabbath breaking and profaning the name of Deity.

On August 6, 1853 the second city council granted Ellis Eames "the right to make malt liquors or ale free of license." Why this right was granted is not clear.7 Jensen, 83-84. Eames and other early officials (for about the first thirty years of the city's history) received no compensation.8 Moffitt, 278.

Ellis and his family left Provo in March 1854 headed for San Bernardino, California, where they arrived in early June. In 1856 he became a district attorney. In 1857, when the "Utah War" commenced and many Mormons returned to Utah, one of Ellis's wives, Sarah, and her children returned to Utah, but Ellis remained in San Bernardino with his other wife, Olive, and their children. Ellis Eames passed away on October 11, 1882.9 Introduction to the Ames Families (http://www.richardsonfamily.homestead.com/Eames.html : accessed 3 January 2008).

He is buried in the Pioneer Memorial Cemetery, San Bernardino, California.10 Ellis Ames Entry on Findagrave.com

Most of this sketch comes verbatim from David M. Walden, Biographical Sketches of Former Mayors of Provo, Utah: A Report to the Provo Municipal Government, October 1, 1990, 5-7.