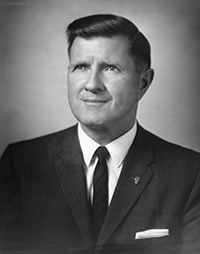 Mayor Dixon was born in Provo on November 26, 1908, the son of Ernest Dixon and Mary Ann (May) Painter. His father was a building contractor and brick layer in Provo and his grandparents were Utah pioneers. Dixon attended the old Timpanogos School, Central Junior High, and graduated from Provo High School. He served an LDS mission in France, Belgium, and Switzerland from 1929 to 1931. In 1932 he received a B.A. degree in French from BYU. 1Virginia P. Dixon, "Biography of Verl Grant Dixon," typescript in Provo City Library, Special Collections; Robert McDougall, "Verl Dixon Tells How He Stumbled into Politics," Daily Herald, 7 Jan 1974.

Unable to find a job as a French teacher because of the Depression, Dixon moved to New York City for his first job with the national office of the Boy Scouts of America. He worked full time as an assistant to the BSA director of personnel and at night took graduate classes in personnel management at Columbia University. In 1937, after four years in New York City, Dixon was transferred to BSA offices in California. He served there three and a half years as a scout field executive.

In 1939 Dixon returned to Provo because of his father's death. He worked as a draftsman for a local architect, as a junior architectural engineer during the construction of Hill Field in Ogden, then as a building inspector for Provo City. After flight training and serving as an instructor in Utah, he was commissioned a flight officer and served in the Air Transport Command until his release from active duty on 25 January 1946. 2Dixon, "Biography"; McDougall, 1974.

Following the war Dixon returned to Provo and entered politics. In November 1946 he was elected Utah County Clerk and served a four-year term. After being a Utah County Commissioner for eight years, Dixon worked as a contractor and also as the manager for the Provo Metropolitan Water District. At that time he helped lead the change back to a commission form of government. After the city voters decided on November 7, 1961, to reject the city manager form in favor of a commission, Dixon was elected mayor on December 19, 1961, and served for 12 years.

One of the major changes during the Dixon administration was the move in 1972 to the new City Center between 300 and 400 West Center street. In 1968 the city commission had approved the new facility and the voters had approved a proposition for general obligation bonds to fund it. Another achievement was building the Eldred Center to serve the community's senior citizens. Water improvements included building three large water storage tanks, drilling new wells, and fencing off spring sources to prevent contamination. With the aid of federal funds, a new sewage system was built for those in the western part of the city in the Sunset area. A new boiler at the power plant and separating the transmission system into separate units helped make Provo's power more dependable. Two substations were built primarily to receive power from the Colorado Storage Project. This upgraded power system was completed without a power rate increase. 3McDougall, 1974; Verl Dixon, interview by Karen Griggs, 13 Jun 1988, Provo, Utah, transcript in Provo City Library; "Mayor Dixon to Run for Re-Election," Daily Herald, Sep 1969, 1, 4.

The city lost a major economic opportunity when Dixon was mayor in the early 1970s. ZCMI officials came to him with proposals to build a major store in the downtown area. In an oral interview, Dixon said the two proposed sites were not available. The LDS church would not give up a proposed site north of the Provo Tabernacle. The Denver and Rio Grande Western Railroad would not give up the railroad on 200 West that ran to Heber, so the alternative site for the ZCMI store was also abandoned. 4Dixon interview, 1988. Other basic reasons for losing this opportunity was the local Provo merchants, who opposed downtown malls, influencing the city to pass restrictive planning and zoning ordinances. Unable to find a suitable location, ZCMI was built in Orem as the anchor for the University Mall. 5Kenneth L. Cannon, Provo and Orem: A Very Eligible Place: An Illustrated History. (Northridge, California: Windsor Publications,1987), 45.

A staunch Republican, Dixon ran for the State House of Representatives in 1974. He cited as qualifications his experience as county clerk and commissioner, Provo mayor, and president of both the Utah Association of Counties and Utah League of Cities and Towns. 6"Verl Dixon Candidate for Utah Legislature," Daily Herald, 25 Apr 1974.

In addition to politics, Dixon participated in church and social activities. He served as bishop of the Provo Third Ward and Utah Stake high councilman. For many years he worked as a volunteer scout leader after leaving his position as a paid official. He also participated in the Rheumatic Fever Foundation, the Provo Kiwanis Club, American Legion, Veterans of Foreign Wars, Sons of Utah Pioneers, and the Mormon Battalion.