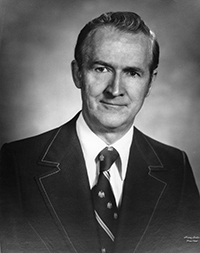 Russell D. Grange was born in Huntington, Utah in 1921, the son of Wallace Grange and Vernessa Tullis. He went through elementary and high school in Price, Utah and then attended Carbon Junior College. After a year at BYU, he enlisted in the Air Force and served as a bomber pilot in World War II. After the war he finished a B.S. degree in business administration at BYU and entered the advertising business. After working at Channel 4 in Salt Lake City, he did advertising for KOVO Radio in Provo. On the side he had his own advertising business. 1Russel D. Grange, interview by David M. Walden, 12 July 1990, Provo, Utah.

Grange’s experience in the Chamber of Commerce and participation in Goodwill Tours to observe businesses in other areas of the nation motivated him to get involved in politics. In 1967 he made his first attempt to get elected, but failed to win a seat on the city commission. However, in the fall of 1971 he won the election to a four-year commission post. When Mayor Verl Dixon retired, Grange decided to run for mayor and was successful against his opponent, John Manning. On January 7, 1974 newly elected Mayor Grange and City Commissioner E. Odell Miner were sworn in at Provo City Center. The third member of the commission was M. Wayne Hillier. Grange served as mayor for four years, thus making a total of six years in city government. 2”Historical Data,” Provo City Ordinances (1989).

Grange considered the major contribution of his administration to be construction of “the most modern sewage treatment facility in the nation.” By January 1978 when he was replaced by the new mayor, the new $17.5 million plant was approximately 85 percent completed. It was funded by a $15 million EPA grant and a voter-approved local sewer tax increase. The plant was needed to meet the clean water standards imposed by the federal and state government. Regional EPA officials said Provo was about two years ahead of any other Utah community in meeting the new requirements. 3Grange interview, 1990; “Russel D. Grange Mayor,” flyer used in 1977 mayoral race against James Ferguson (source of quote); “Provo City Administration,” Daily Herald, 15 January 1978, 48; “Final Environmental Statement Ready on Provo Sewer Plant,” Daily Herald, 2 August 1974. To administer this and related matters formerly under the jurisdiction of the Power Department, 1974 Provo created a new Department of Water and Wastewater. A citizen advisory Water and Wastewater Board was also created. 4”Provo Forms New Department,” Daily Herald, 26 February 1974; “Provo’s Water, Wastewater Board Holds First Meeting,” Daily Herald, 7 November 1974.

Two developments during the Grange administration were part of an updated City Master Plan. The first of these developments was a revamped neighborhood organization, a program that began in 1968. In February 1974 the city commission created several new neighborhoods. By 1977 there were 25 fully organized neighborhoods, which improved communication between city government and the citizens. 5”Russell D. Grange Mayor,” “Provo City Administration;” Robert McDougall, “Provo’s Neighborhoods Realigned by Commission,” Daily Herald, 28 February 1974. Second, the city zoning ordinances were completely rewritten, following citizen input at commission meetings held periodically in the various neighborhoods.

Other developments during Mayor Grange’s administration included 1) constructing the city’s first low-cost housing for the elderly, 2) planning for the Excelsior Hotel, 3) increasing the number of businesses in two industrial parks, thus expanding the tax base, 4) rejuvenating the downtown shopping area in response to the challenge from Orem’s University Mall opened in 1973, 5) developing for the first time a disaster response program, 6) acquiring 27 acres along Provo River for public parks, and 7) constructing a $1 million Provo Recreation Center in partnership with Provo School District. In six years city property taxes increased only 1 mill, while city revenues increased from $700,000 to $1,700,000. 6”Russell D. Grange Mayor;” “Provo City Administration.”

After Grange’s political career ended, his occupation was primarily working as an agent for Provo Real Estate. He also had some rental units and provided maintenance for them. For awhile he also sold western American art, primarily bronze sculptures. 7Grange interview 1990.

Grange has held several LDS church callings, including high councilman in the Provo East Stake. In 1985 and 1986 he and his wife served a public relations mission in Fort Lauderdale, Florida. He has been a member of the Rotary Club. In 1947, Mayor Grange married Helen Fullmer. They had four children. In 1990 Grange and his wife still lived in a house they built in 1962 at 1020 North 1200 East in Provo. 8Grange interview 1990.