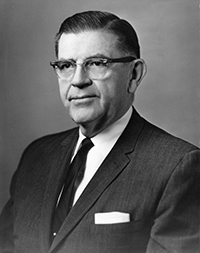 Ariel S. Ballif was born on December 9, 1901 in Logan, Utah, but when only two years old moved with his parents to Rexburg, Idaho. His father, John Lyman Ballif, Sr., was a merchant and church leader. His mother, Emma Smith, was known for her beautiful singing. Ariel grew up in Rexburg, where he earned a teaching certificate at Ricks College. He taught during the 1922-1923 school year at Parker High School in Rexburg. 1 T. Earl Pardoe, The Sons of Brigham (Provo: Brigham Young University Alumni Association, 1969), 519-521; Ariel S. Ballif, interview by David M. Walden, 12 Sep 1990, Provo, Utah.

In 1923 Ballif moved to Provo to attend Brigham Young University, where he completed a B.S. in Social Science in 1925. At BYU he played on the varsity football, basketball, and track teams and he also won a medal for singing. On August 28, 1925, Ballif married Artemesia Romney.

Ballif continued teaching after completing his undergraduate training at BYU. He taught at Madison High School in Rexburg in 1925-1926, then taught at Ricks College the following year. In 1927 he and his wife began a three year mission for the LDS church. Ballif became the new principal at the Maori Agricultural College in New Zealand, while his wife was a leader in local Primary organizations. 2 Pardoe, 1969.

Returning to the United States in 1930, Ballif became the principal of the LDS Seminary in Midway, Idaho. He left that community in 1936 to begin graduate training in Sociology at the University of Southern California in Los Angeles. He finished his M.A. in 1937 and then studied one full year for the Ph.D. at USC. There he specialized in race relations under Dr. E. S. Bogardus. By studying in the summers, Ballif was able to complete the doctorate in sociology in 1945. 3 "BYU Professor Takes Post at Jap Camp," The Salt Lake Tribune, 5 Sep 1943, A-11.

In 1938 Ballif began a long and distinguished career as a BYU professor of sociology. His specialties were race relations, marriage and the family, and social welfare. During World War II as part of his adivsory role in the War Relocation Authority (WRA), Ballif spent a month counseling Japanese-Americans at the Relocation Center at Topaz, Utah. 4 Pardoe, 1969.

He was the WRA advisor for seven western states. He co-authored a text used for marriage and family classes. At BYU he served as the acting dean of summer school from 1952 to 1954 and acting dean of students in 1954. 5 Pardoe, 1969.

In 1955 Ballif resumed his work with the Polynesian people of New Zealand. In February President David O. McKay appointed him to a curriculum committee for the Church College of New Zealand (CCNZ). Shortly after that he was called to be the new mission president, replacing President Gordon Young. During his term as mission president, major developments occurred among the New Zealand Saints. Hundreds of labor missionaries helped construct the New Zealand Temple and the CCNZ. President McKay dedicated both the temple and college in April 1958. The next month, just before Ballif's release as mission president, his brother-in-law Elder Marion G. Romney organized the Auckland Stake. This was a fulfillment of Ballif's efforts to train local church leaders. He had replaced missionaries serving in branch and district positions with local authorities. 6 R. Lanier Britsch, Unto the Islands of the Sea: A History of the Latter-day Saints in the Pacific (Salt Lake City: Deseret Book, 1986), 324-329.

Back at BYU in 1958, Ballif resumed teaching and also became the advisor for the university's foreign students, a responsibility he enjoyed until his retirement in 1972. 7 Pardoe, 1969; Ballif interview 1990.

Ballif was elected to be a city councilman on November 16, 1960 while Dr. Lloyd Cullimore was mayor. The next November the voters not only elected three new city members, but also rejected the council-manager form of government in order to return to having three city commissioners. Ballif served as the interim mayor until new city officers, including Mayor Verl Dixon, were installed on January 1, 1962. 8 John Clifton Moffitt, The Story of Provo, Utah (Provo, Utah: self-published by author, 1975), 274; "Historical Data," Provo City Ordinances (1989).

Ballif and his wife had five children: two sons and three daughters. He was a member of the Utah Educational Association, American Sociological Association, Phi Kappa Phi, Alpha Kappa Delta, and the National Council on Family Relations. Church callings included bishop, patriarch, and president of the East Provo Stake. 9 Pardoe, 1969.