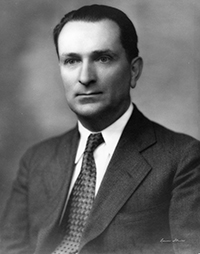 Mark Anderson was born on October 2, 1889 in a log cabin on a farm near Teton, Idaho, the second child of John Christian Anderson and Mary Jane Haws. His parents moved to Jackson Hole County, Wyoming in 1896. Anderson learned to love the outdoors as a child. He had several pets that others would consider wild animals, and he loved fishing and hunting. Later in life he painted many portraits of antelope, deer, and other wildlife. 1 "Mark Anderson," biographical sketch, no author, n.d.; "Mark Anderson, Four Times Provo Mayor, Dies," Daily Herald, 8 May 1962, 4.

Anderson's mother taught him to read, using the Bible and Montgomery Ward's catalogs. Occasionally he attended a country school eight miles away in Jackson, then called Antelope Pass. In 1903 Anderson was expected to die from appendicitis, so the cemetery in Jackson was begun just for him. But he survived, much to the surprise of the doctor. 2 "Mark Anderson," biographical sketch.

While on a cattle drive, Anderson at age 18 decided to go back to school after a five-year gap. He attended the Academy of Idaho in Pocatello for three years, then in 1911 enrolled in the School of Forestry at the University of Idaho in Moscow. He received no degree, but did well in Civil Service exams; thus began his work with the U.S. Forest Service in 1912. He was assigned mainly to the Ogden Regional Headquarters of the Forest Service. With James T. Jardine he wrote one of the first scientific publications on range management. 3 Mark Anderson, "Men and Women Who Have Influenced My Life Most," typescript, n.d.

In August 1919 Anderson resigned from the Forest Service and began working with his mother in the hotel business in Pocatello. Later that year they sold out and moved to Provo, where Anderson became co-owner and manager of Roberts Hotel, a downtown landmark now on the National Register of Historic Places. In Provo he was elected president of the Kiwanis Club and the State Fish and Game Association. 4 Anderson, "Men and Women..."

A strong Republican, Anderson was elected mayor of Provo in the fall of 1935, and was reelected in 1937 and 1939. In September 1941, near the end of his third two-year term as mayor, he was appointed by Utah's Democratic governor to head the Utah State Fish and Game Department, a post he held until June 1942. He resigned to devote more time to managing the hotel. In 1945 Anderson again was elected mayor. After completing his term, he lost a reelection bid in 1947 to George E. Collard.

Anderson's main contribution as mayor was being the "Father of Provo Power." In 1936, soon after taking office for the first time, approximately 75 percent of the community's residents signed a statement approving of locally produced power. On October 14, 1936 they approved city bonds to finance the project. However, considerable opposition arose from Utah Power and Light Company, which supplied power to Provo. Several lawsuits occurred, until a December 1937 decision by the Utah Supreme Court approved the city's right to build the new plant. That ruling was supported by a decision of the U.S. Supreme Court on 13 October 1938. Three anti-municipal power propositions were soundly defeated. In April 1940 Provo began producing its own electricity using two coal powered units. Taxes were not raised for this project, and collected fees and investments paid off the bonds and generated money for the city's general fund. On 21 September 1970 the Mark Anderson Utility Center at 890 North 251 West was dedicated in honor of the former mayor. 5"Mark Anderson Utility Center Dedication Program," 21 Sep 1970; Marilyn McMeen Miller and John Clifton Moffitt, Provo: A Story of People in Motion (Provo: Brigham Young University Press, 1974, 84-85; "Father of Provo Power System," Daily Herald, 9 May 1962; N. LaVerl Christensen, "Provo Owes Debt to Anderson," Daily Herald, 27 Nov 1984, 17.

Other municipal achievements during Anderson's four terms as mayor included 1) a large aqueduct from the mouth of Provo canyon to the Rock Canyon Reservoir, 2) miles of new sewer lines, mainly in west Provo, 3) a garbage disposal system, 4) 28 miles of asphalt paving to replace dirt roads, 5) a remodeled city library, and 6) a new golf course. In addition, WPA and CCC workers built a new boat harbor on Utah Lake. Progress was made on the Provo Airport and the former post office was purchased and remodeled for city offices. 6"Mark Anderson Utility Center Dedication Program," 1970.

Anderson married Arlene Stevens in Ogden in 1918. She died in 1924. A year later he married Lillian Gardner. Anderson had four children and one adopted daughter. His son Mark Anderson, Jr. managed the Roberts Hotel for many years and helped gather historical materials on the hotel and his father's career, which are displayed in a room at the hotel. Although his parents, wives, and children were LDS, Anderson never jointed any religion. Anderson died on May 7, 1962 and was buried in the Provo City Cemetery. His death was marked by articles in Utah's leading newspapers and personal letters to his survivors from some of the state's prominent individuals. 7N. LaVerl Christensen, "Hotel History Room Stirs Nostalgia," Daily Herald, 26 May 1985, 51; Mark Anderson, Jr., personal communication with David Mo Walden, 28 Sep 1990; Funeral Card in memory of Mark Anderson, "Mark Anderson," Deseret News, 10 May 1962; "Mark Anderson," Salt Lake Tribune, 10 May 1962; Letters of condolence to the Anderson family from C.S. Thornock of the U.S. Forest Service, U.S. Senator Wallace F. Bennett, lawyer Jackson B. Howard, and the office of U.S. Congressman David S. King, in possession of Mark Anderson, Jr.