By the Numbers: AuthorLink

As you may know, we love hosting authors here at the Provo City Library! This month we've got visits planned from Julie Berry and Darren Shan, and next month we'll welcome Kenneth Oppel and David Wiesner. Get full event details on our AuthorLink page. 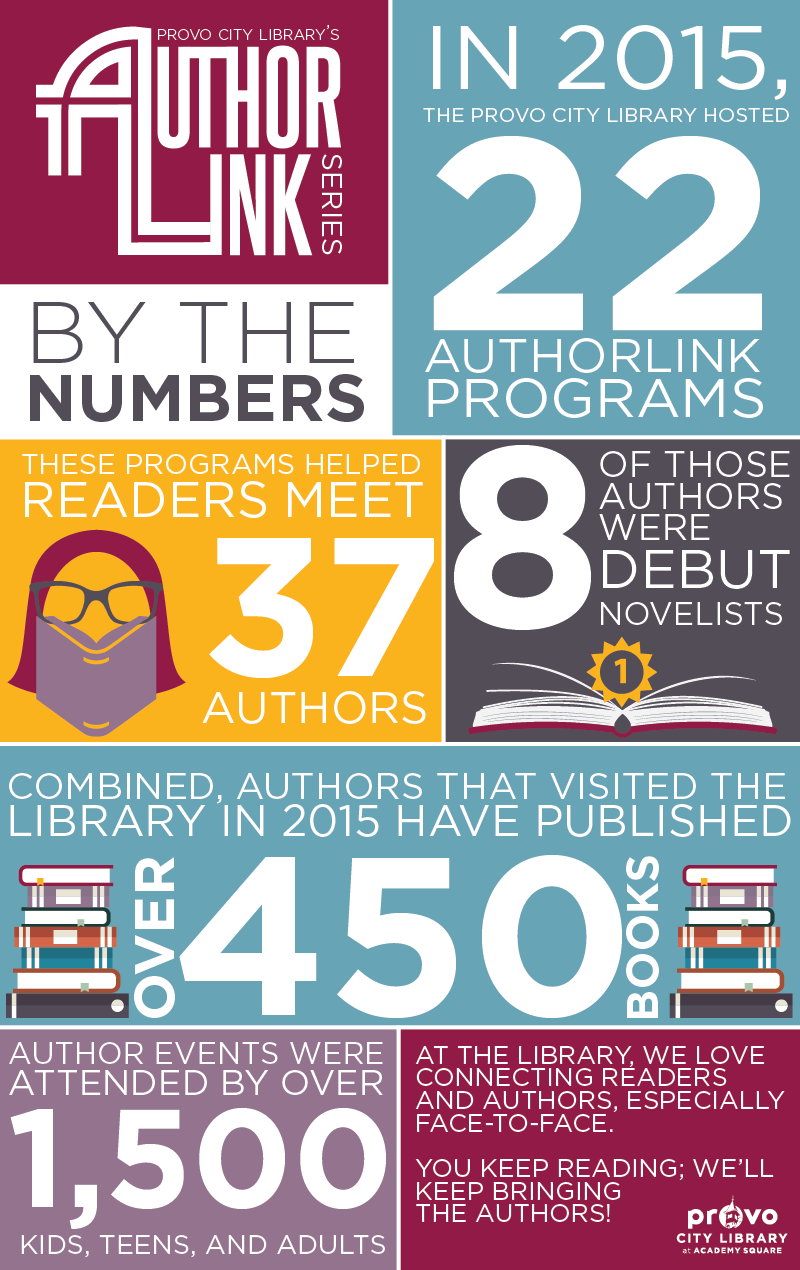 My love of history began in college when I discovered that instead of the dry list of facts I had assumed history books contained, they were actually full of incredible stories, unbelievable drama, powerful personalities, and world-changing events. And it was all real! However, when real life started for me after college, the time I had available to read enormous historical volumes understandably lessened, and my quest for knowledge about the past was largely put on hold.

But last year that all changed when I discovered the OverDrive collection offered through the library’s website. I downloaded the free app onto my phone, chose a digital audiobook to download, and plugged in my earbuds. As I did yard work or cooked dinner, I could also be experiencing the thrill of political intrigues or the tragedies of the battlefield. Doing the dishes got a whole lot more exciting! Here are five of my favorite audiobooks on American history that are available through OverDrive. 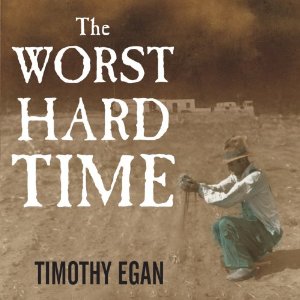 THE WORST HARD TIME: THE UNTOLD STORY OF THOSE WHO SURVIVED THE GREAT AMERICAN DUST BOWL
by Timothy Egan
(2006)

In the middle of the Great Depression, those living in America’s heartland experienced calamity in a form like nothing ever seen before or since: the “black blizzards” of the Dust Bowl. Determined to hold onto their hard-won land, families faced the risk of losing their crops, animals, homes, and health. Telling in their own words how they lived in sod huts with wet sheets placed over the cracks, or how they bottled sagebrush to eat after all the crops were gone, the grit and endurance of these survivors is truly incredible. 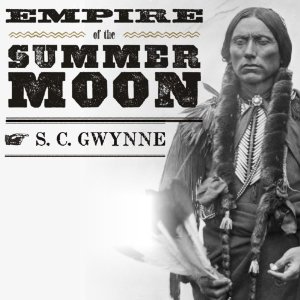 EMPIRE OF THE SUMMER MOON: QUANAH PARKER AND THE RISE AND FALL OF THE COMANCHES, THE MOST POWERFUL INDIAN TRIBE IN AMERICAN HISTORY
by S. C. Gwynne
(2010)

A vivid history of the Comanches and their last stand to stop white settlers from taking the Indian lands of the Great Plains. During the 40-year territory war, many fascinating characters arose on both sides, including Quanah Parker, son of a Comanche chief and a white woman who had been kidnapped as a girl but grew to love the Indian way of life so much that she refused rescue by her European relatives. 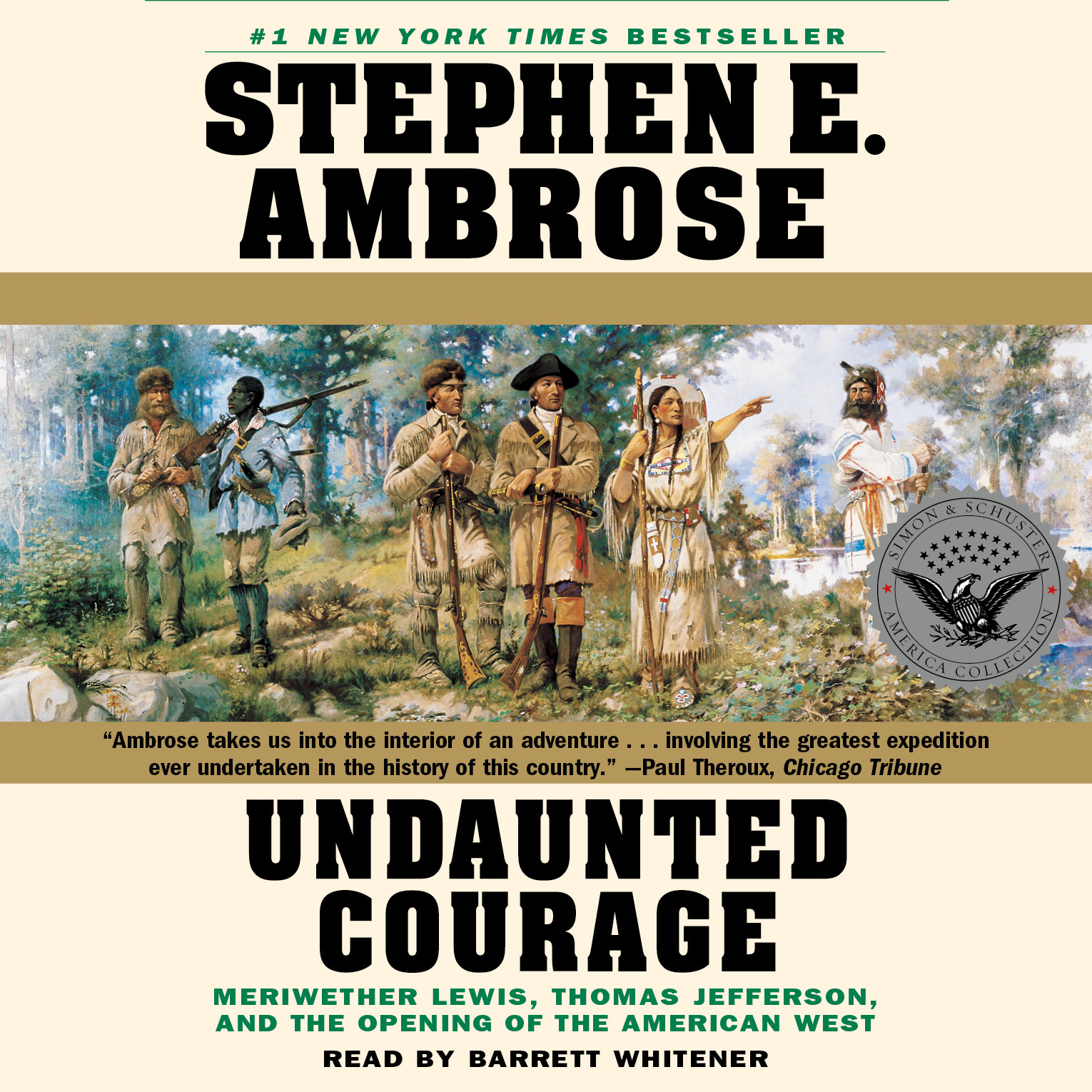 Captain Meriwether Lewis and Lieutenant William Clark led an expedition of men and one woman past the boundaries of what was then the United States and into the great unknown. They endured hardships, saw jaw-dropping natural wonders, took specimens of plants and animals unknown to European settlers, and began their education in the complicated relationships of the native peoples with each other and with the whites. The ultimate adventure story that helped make America what it is today. 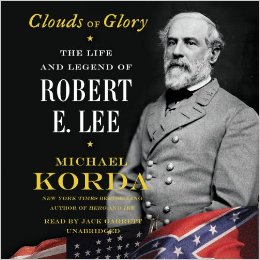 CLOUDS OF GLORY: THE LIFE AND LEGEND OF ROBERT E. LEE
by Michael Korda
(2014)

Although uncomfortable with slavery and not in favor of secession, when Lee was offered the command of the Union Army at the start of the Civil War, he refused the post because he said he could never fight against his beloved Virginia. He became the brilliant Confederate general who would fight the long defeat with dignity and a strong sense of honor. A detailed and fascinating portrait of the man who would become the nation’s greatest military leader and earn respect and admiration from both North and South. 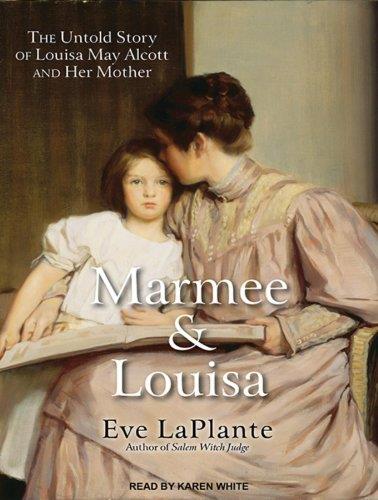 MARMEE & LOUISA: THE UNTOLD STORY OF LOUISA MAY ALCOTT AND HER MOTHER
by Eve LaPlante
(2012)

Much has been made of Louisa May Alcott’s father and his influence on her and her writing. But now a great niece of Louisa’s, with the help of newly discovered family letters, brings Louisa’s mother, Abigail May, out of obscurity. She effectively argues that it was Louisa’s intensely close relationship with her mother -- and their shared frustration at being intellectual and ambitious women in a time that discouraged female independence -- that was truly the greatest shaping force in Louisa’s life.

(Need help with OverDrive? Check out our tutorials page.)

This week we return with part two of our list of the 10 worst boyfriends in classic literature (missed part one? Read it here!). As I mentioned last week, MAJOR spoilers abound in these descriptions, though the books are all at least 80 years old so you've probably at least seen the movie by now...

On one level, I feel really bad for Heathcliff, but on another, deeper level, I just think he’s terrible.  He’s moody, obsessive, possessive, violent, and prone to kidnapping people.  To be fair, Catherine is also awful.  That whole, “Whatever our souls are made of, his and mine are the same” line seems fairly accurate, and not in a flattering way.

Sergeant Troy treats Bathsheba badly, but he absolutely destroys poor Fanny Robbin.  That sad, sweet girl went to marry him, but accidentally went to the wrong chapel.  Does this seem like an innocent accident to you?  Well, not to Sergeant Troy.  Humiliated, he refuses to speak with Fanny, in spite of the fact that she is pregnant with his child.  He then woos and wins Bathsheba, only to gamble away her fortune and criticize her for not being Fanny.  Oh, did I mention that Fanny dies in abject poverty as a result of Troy’s cruelty?  Yep, he’s such a bad boyfriend that it actually kills her.

Poor Ophelia.  Your boyfriend takes out all his mommy issues on you.  He claims to love you but then shows up half-dressed at your door, grabs your wrist in a vice-like grip, stares at you for a while, says nothing, and then leaves while still staring at you like a creeper.  When you try to break things off with him, he verbally assaults you and questions your virtue.  That’s when he goes really nutso.  He stabs your dad.  He stabs your brother.  He drives you to suicide.  Not a great track record.

2) Angel Clare, TESS OF THE D’URBERVILLES

I hate Angel Clare.  HATE him.  Maybe I’m not supposed to because Tess loves him so much and because I’m supposed to be busy hating Alec d’Urberville, but my most intense literary hatred is forever reserved for Angel.  It’s not your girlfriend/wife’s fault she was raped, Angel.  Even if she had been gallivanting across the English countryside with every lord and shepherd in sight, it’s not like you’re exactly a paragon of virtue yourself, you hypocrite.  You’re the worst.

Except for Mr. B, who is the actual worst.  Full disclosure: I’m not a fan of this book, since it’s essentially the story of a wealthy man repeatedly trying to seduce or rape his maid in ever more creative ways.  She evades him for 500 pages, at which point he repents and they marry.  Mr. B: a terrible reward for Pamela’s virtue.

And there we have it! Classic literature's terrible boyfriends! Who did I leave out?