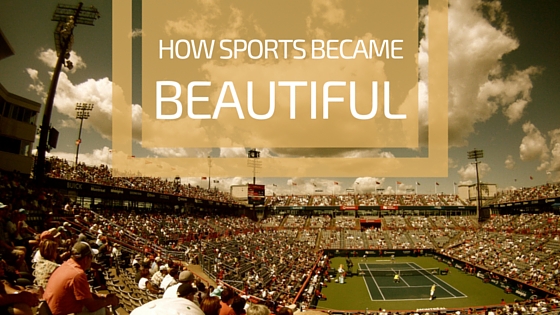 The perfect last second catch in the end zone or the daring arc of the 3-point shot made at half-courtmay not have much practical purpose outside the arena, but certain moments that steal our breath away, that catch our eye and make us stop and stare—these moments change us and become works of art themselves.

In the book IN PRAISE OF ATHLETIC BEAUTY, Hans Ulrich Gumbrecht, Professor of literature at Stanford University, laments that much of the popular perspectives of sports tend to be socially patronizing anddismissive of the fans who have fallen for modern-day version of “bread and circuses.”

“Something does not need to have purpose in order to be beautiful,” says Gumbrect. “Whatever we findbeautiful looks as if it had purpose.”

At the Provo Library, The Art of Sport Exhibit (on display now in the Attic) celebrates the intriguing intersection between art and sports while reminding us that sports are made beautiful by us. 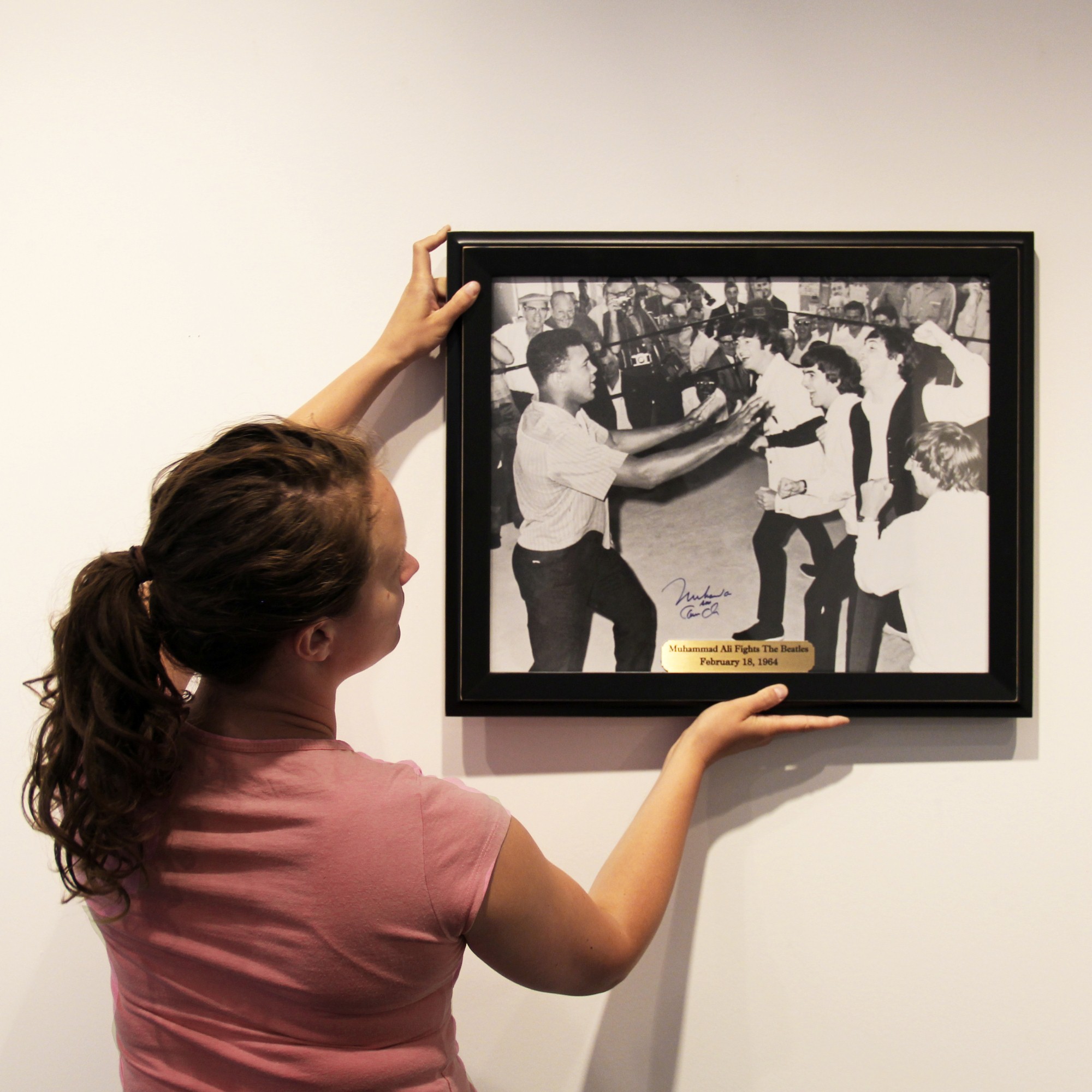 Athletes are not just people who play games well, they are those who can accomplish the impossible. When we watch sports, we don’t just see the game; we see a story. We see the athlete; poised and self-disciplined, the body; pushed to its limits, the personality; where perfection is the only possibleoutcome. In athletes, we see something more than humanity: we see the possibility of greatness.

Art and sports are interdependent. They inspire each other because since ancient times, we’ve found that merely telling the stories of athletes isn’t enough. The human form demands more than description; it demands depiction. This is why sports seems to live both in the arena and in our backyards.

Noticing art in sports requires more than just what we look at, it requires us to see. More specifically the art of sport asks us to see ourselves, our possibility for greatness. 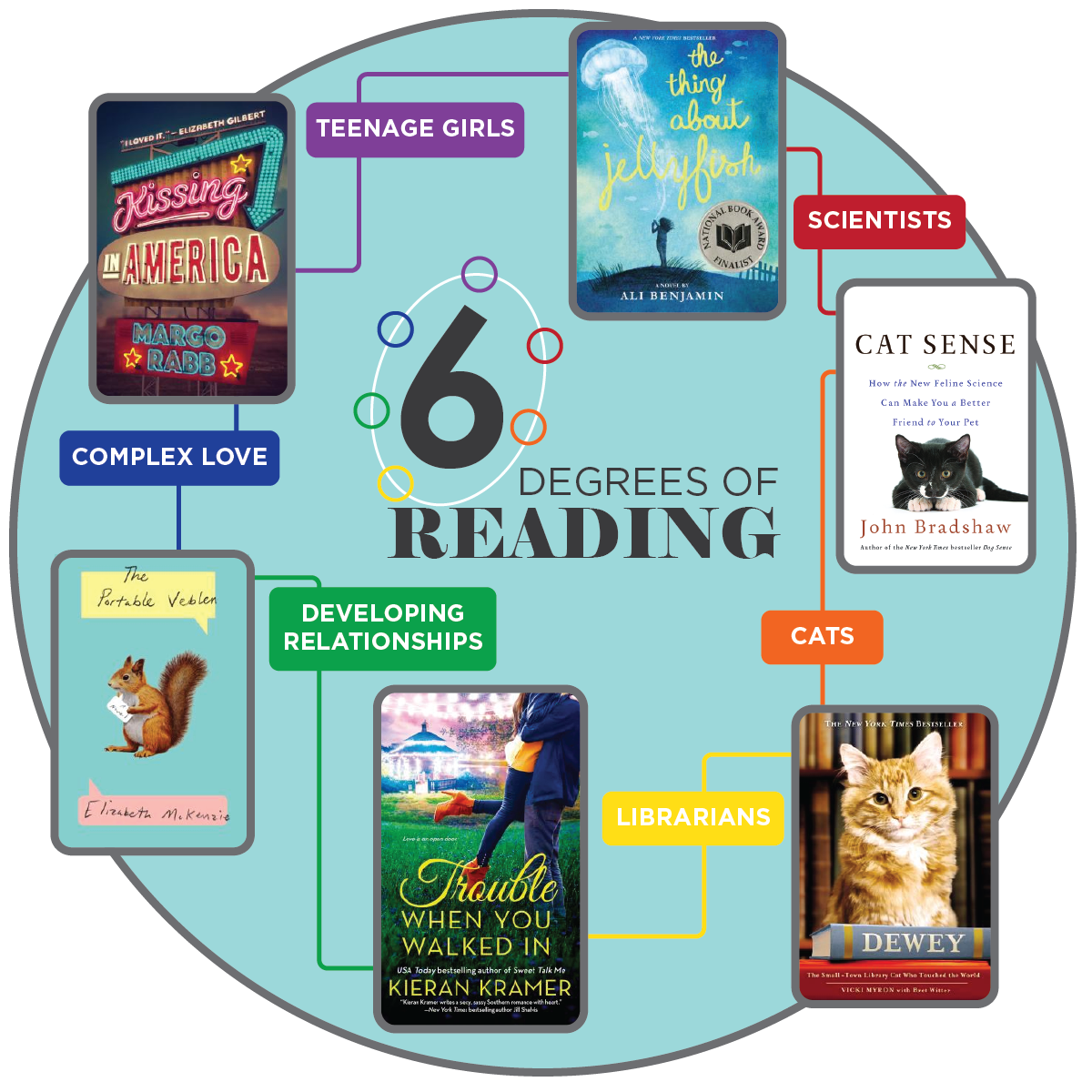 Ever wonder how librarians hone their recommendation skills? Sometimes, our librarians play a game we call the 6 Degrees of reading. The rules are simple: choose six books, each connected somehow to the book above it, with the last book in the list connecting to the first. Periodically, we like the results enough to share them with you. Today's iteration takes a romp through young adult fiction, adult nonfiction, and romance to bring you some of our favorite things: cats and kissing.

THE THING ABOUT JELLYFISH
by Ali Benjamin
(2015)

Suzy Swanson is a teenage girl trying to make sense of a new school and new peers, but that's been hard to do ever since the death of her best friend, Franny. Suzy is also a budding scientist, and when she learns about the Irukandji Jellyfish she develops a new hypothesis about what really happened to her friend.

CAT SENSE: HOW THE NEW FELINE SCIENCE CAN MAKE YOU A BETTER FRIEND TO YOUR PET
by John Bradshaw
(2013)

Scientist John Bradshaw explains how cats evolved from lone predators to domestic companions with the hope that people will understand their cats better and provide a more harmonious environment for them.

DEWEY: THE SMALL-TOWN LIBRARY CAT WHO TOUCHED THE WORLD
by Vicki Myron
(2008)

Dewey Readmore Books, a cat, was found one morning in the Spencer, Iowa library. Dewey was adopted by librarian, Vicki Myron who was his caring owner for the next 19 years. Dewey changed Vicki's life and touched the lives of many more.

TROUBLE WHEN YOU WALKED IN
by Kieran Kramer
(2015)

Cissie Rogers is a librarian in a small town in North Carolina. When Mayor, Boone Braddock puts the library's future in peril, Cissie decides to take matters into her own hands by running for mayor herself. What Cissie doesn't count on is a developing relationship with her opponent.

THE PORTABLE VEBLEN
by Elizabeth McKenzie
(2016)

A young couple in a developing relationship discover how complex love can be as they encounter everything from dysfunctional families, to the attentions of a seductive heiress, to an encounter with a very charismatic squirrel.

Two teenage girls, Eva and Annie, discover how complex love can be as they journey across the country to find Will— the boy Ava thinks is her soul mate. 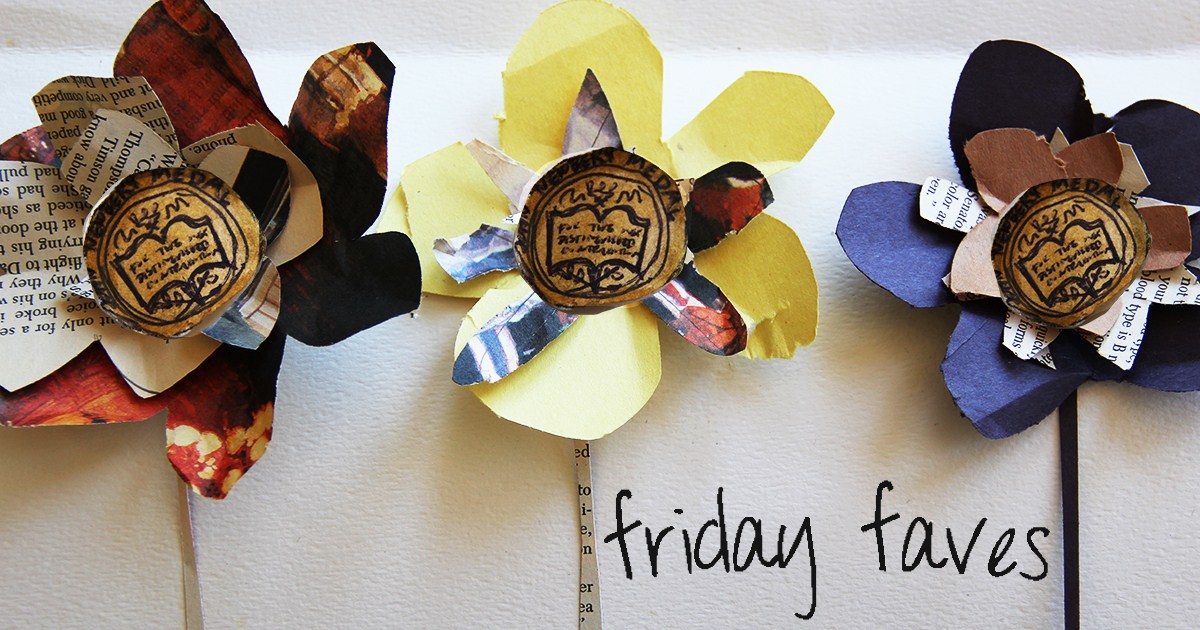 As you may have heard, our Library Director, Gene Nelson, is a member of the Newbery Committee this year. In a show of solidarity, many of us are taking on the challenge to read as many books for kids aged 0-14 as we can get our hands on. Though I haven’t been keeping up with Gene’s feverish reading pace, I’ve read more middle grade novels this year than in the past several years combined (I’m going to blame that on a toddler and a Netflix addiction). While Gene must remain mum about what books he’s eyeing for the award, as a nobody to the committee I’m free to share my opinions about things I’ve been reading. In no particular order, here are my favorite middle-grade novels of 2016 so far.

Every so often, you notice unintended patterns in your reading. When choosing my favorites of the year so far, I found myself deciding between two excellent novels about children and foxes, and PAX edged out MAYBE A FOX by Kathi Appelt. Both are excellent; PAX is remarkable. This book manages to address themes of loyalty, friendship, abuse, trust, and the price of war all while telling the simple story of a boy and his fox. Any attempt to simplify PAX’s storyline in this blurb doesn’t quite do justice to the book. It’s about finding truth in unexpected places; it’s about learning to be strong; it’s about the weight of our decisions, and learning how to know whether you’ve made the right one. The prose is lyrical, the characters are engaging, and the book is great.

Middle-grade fiction is chocked full of grandparent stories. I’m not quite sure what it is that draws writers to the premise—perhaps a the feeling that we need to know where we come from to understand where we’re going—but there are countless stories of surly 12-year-olds visiting curmudgeonly grandparents and learning life lessons along the way. At first, I thought HOUR OF THE BEES was just another one of these stories, but I was mistaken. After a few chapters, the book jolted me awake and grabbed my attention with a parallel magical story that transforms this book from just another grandparent story to something amazing. To say more would be to spoil a surprise, but you really shouldn’t miss this one. Bonus: it’s by a local author!

More than any book on this list, SUMMERLOST gave me all the feels. Ally Condie describes this book as a book about “falling in friendship”, and she absolutely delivers on that promise. This isn’t a love story; it’s a friendship story of the best kind. Cedar Lee and her mother and younger brother move to the town of Iron Creek for a summer as they’re trying to cope with a devastating loss in their family. Trying to escape her grief, Cedar throws herself into a job and finds a friendship and a mystery that get her through the summer. You’ll laugh! You’ll cry! You’ll want to get a ticket to the Shakespeare Festival, and you’ll be grateful for your family and friends and the way that they buoy you up in times of trouble. Bonus: Ally Condie is local as well!

One of my favorite things about Kate DiCamillo’s writing in RAYMIE NIGHTINGALE is the way she manages to communicate big concepts in small sentences. RAYMIE NIGHTINGALE finds young Raymie preparing to compete in the Little Miss South Florida Tire contest as a way to try to convince her absent father to come home; along the way she makes friends with would-be competitors, learns to twirl a baton, and finds out what her soul was made for.

I said this list was in no particular order, but I lied: MAYDAY just might be my favorite so far. MAYDAY is gripping right from the start. From the publisher’s description: “Wayne Kovok lives in a world of After. After his uncle in the army was killed overseas. After Wayne and his mother survived a plane crash while coming back from the funeral. After he lost his voice.” Just that description makes me want to read it again! MAYDAY is equal parts funny and substantive as it explores the ways that family helps and (maybe) hinders the healing process. There is a grandparent, there is an absent father, and at the heart of the book is an interesting main character just trying to find his voice. READ THIS BOOK!

It’s July, which means that there’s still plenty of time for more great books to come out! What’s your favorite middle-grade novel of the year so far? What did I miss? 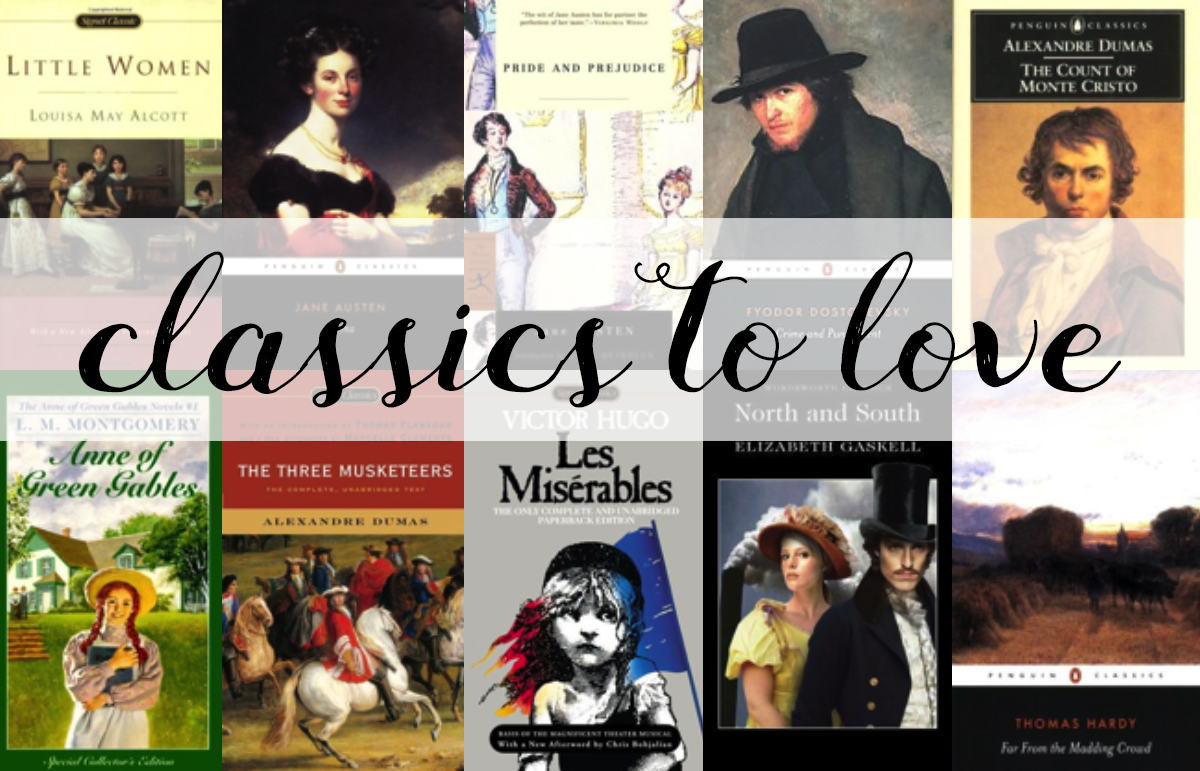 Adjective
1. Judged over a period of time to be of the highest quality and outstand of its kind
Synonyms: definitive, authoritative

Classics: I. Love. Classics. They're not everyone’s cup of tea, but when you find the good ones they can really speak to your soul. I recommend classics to build well-rounded readership but also because they are well written and are something you can sink your teeth into. They are fiction, but not silly fiction that will fade with every new trend. They aren’t necessarily your fun, poolside entertainment kind of books, but you can become just as absorbed if you give them a chance.

Classics give historical perspectives of the authors and help describe how society and culture is formed. These books can give deeper insights on life—growing up, family dynamics, love, betrayal, school, marriage, work, race, religion, war and so much more. Some of these I first read as a teenager when I’d ask my dad for book suggestions, but I’ve come back to these over the years. At different ages and stages of life these books have held deeper meaning. All of these favorites would be excellent for men and women, at all ages, teenage and above.

Here are 20 Classics to love—or at least make you feel something (preferably not disgust): 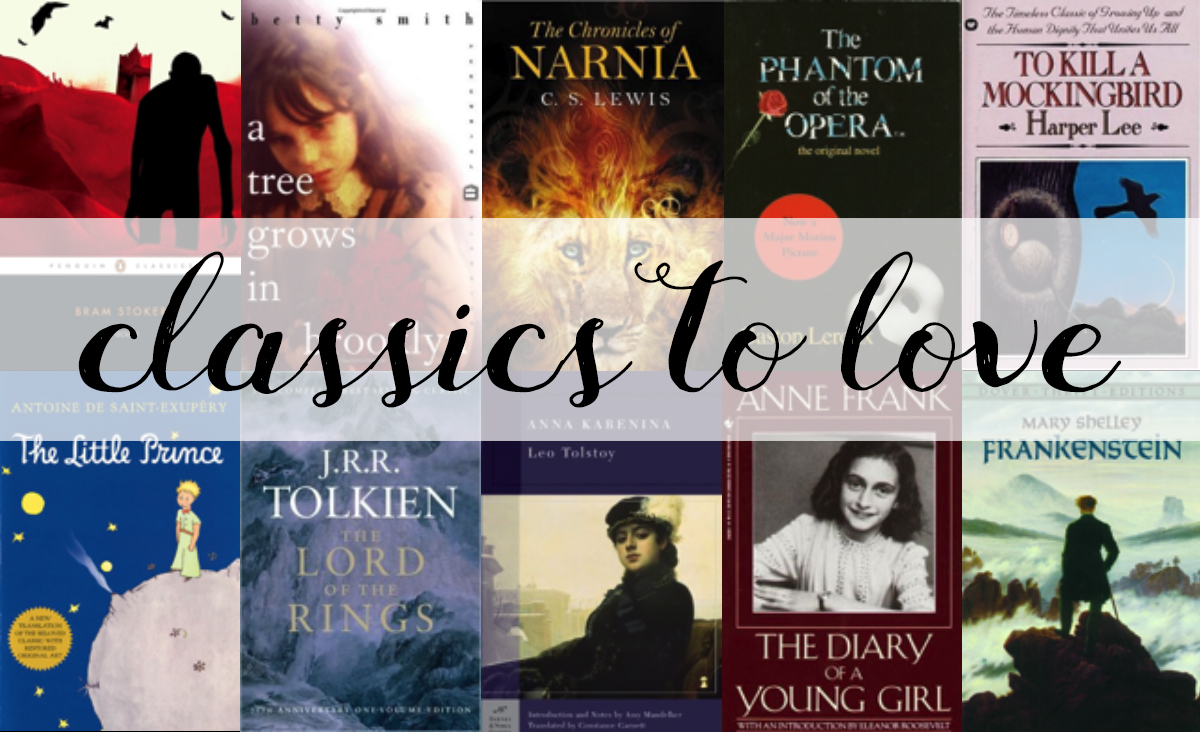