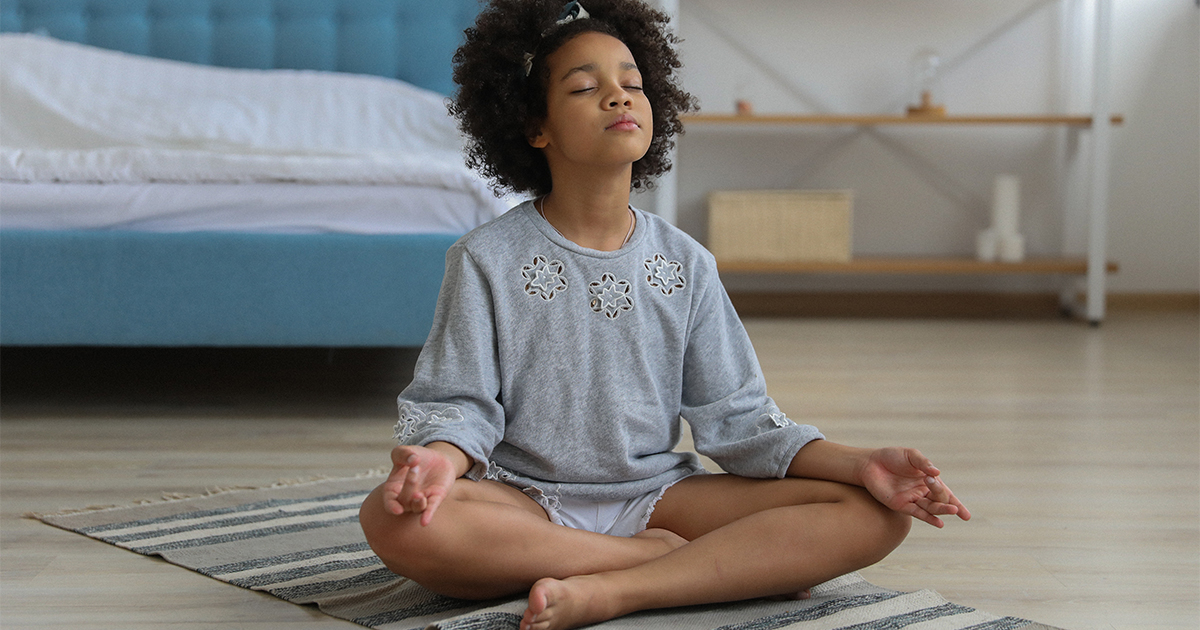 After being socially-distanced and cooped up all summer long, mindfulness is more important than ever. If your kids are like mine, the first couple of weeks school let out, being home was a novelty and everyone enjoyed playing games together and getting creative. As time wore on, the squabbles and grumpiness increased as each day passed. With life continuing in a sort of limbo between chaos and normalcy, the stress in our house is almost unbearable. Cue mindfulness practice! Focusing on breathing and regulating emotions can improve the energy in your whole house. If not a total revamp, then at least a few moments of peace and quiet.

Here are some books to get your family started on lowering the stress and pent up energy in your home: 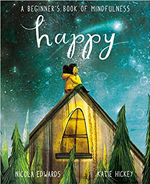 HAPPY: A BEGINNER’S BOOK OF MINDFULNESS
By Nicola Edwards
(2018)

Young readers are encouraged to explore their emotions and notice the beauty around them through stunning illustrations and powerful rhymes. This poetic journey to a place of happiness and calm will inspire and empower your child to enjoy the practice of mindfulness. 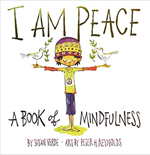 I AM PEACE
By Susan Verde
Illustrated by Peter H. Reynolds
(2017)

Susan Verde tells the story of a young boy whose emotions and rushing thoughts start to take over. He takes a deep breath, steadies himself, observes his thoughts, and focuses on feeling thankful and kind to reset himself and be at peace. Peter H. Reynold’s iconic illustrations help bring the message home for the wiggliest of readers. 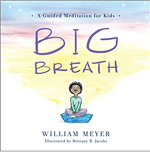 BIG BREATH: A GUIDED MEDITATION FOR KIDS
By William Meyer
(2019)

We breathe all day long and don’t even spend a moment to think about it. But what if we did? William Meyer helps kids learn to use their breath to go on adventures without leaving their favorite comfy spot. By the time your kids open their eyes, they will feel calmer and more relaxed. 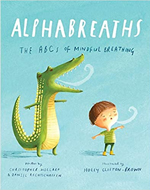 ALPHABREATHS: THE ABCS OF MINDFUL BREATHING
By Christopher Willard
(2019)

Children can learn their ABCs and basic mindfulness techniques through creative breathing exercises that connect them with nature and remind them to fill their heart with thankfulness. The simple and playful illustrations are a wonderful introduction to the power of breath awareness. 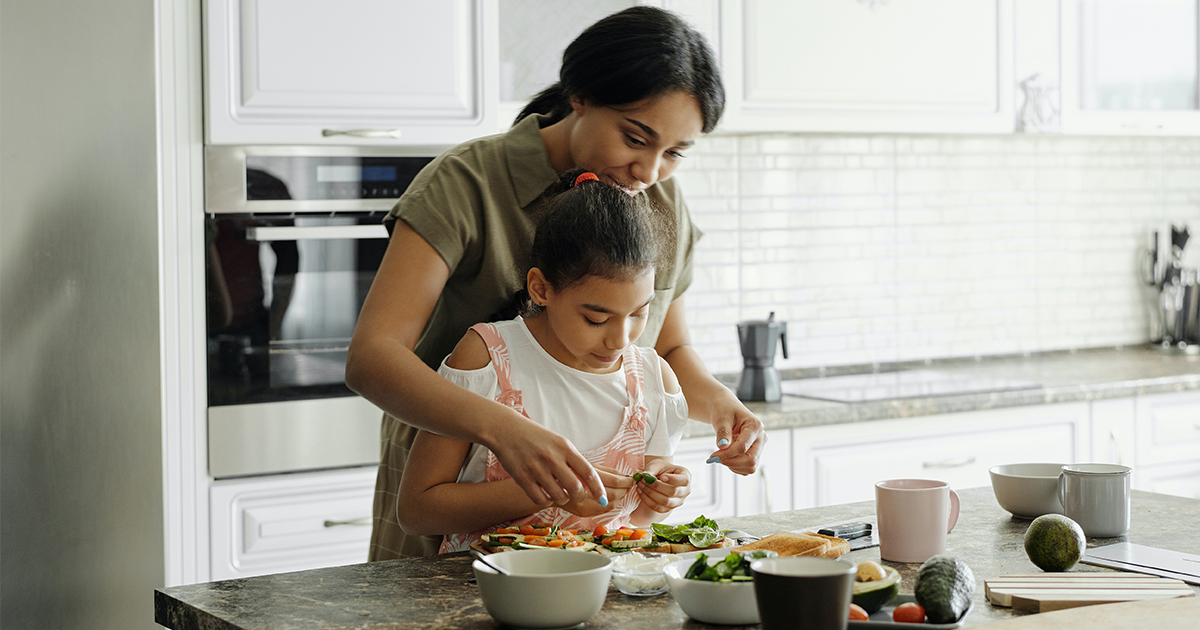 I have always loved Thanksgiving. Every year, I view it as welcome break to spend time with family, express gratitude for the blessings and privileges I enjoy, and eat yummy foods that for some reason we only make once a year (if anyone wants to normalize making cranberry sauce and stuffing year-round I will support that crusade). But, like everything good, Thanksgiving will probably look pretty different this year. Here’s hoping that we are all still able to express gratitude for all that we do have, and eat some delicious food with our families.

As you prepare for Thanksgiving, here are some of the best kid-lit chefs to get you in the mood to cook up a delicious feast of your own. Be warned – better not to read while hungry! 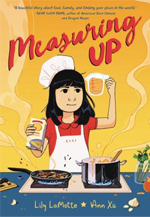 Cici has just moved from Taiwan to Seattle with her parents and is still trying to adjust to her new school and country. More than anything, she misses her grandmother back in Taiwan. When she sees an advertisement for a kids’ cooking contest with a cash prize, Cici cooks up a plan to win the prize money and bring A-ma to Seattle for her 70th birthday. It seems easy enough, until she meets her assigned competition partner – the intimidating Miranda who works in her family’s fancy restaurant and insists that they won’t win the competition by making Taiwanese food. This new middle-grade graphic novel focuses on Cici while she figures out where she fits in. 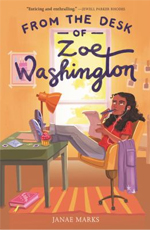 The summer before seventh grade, 12-year-old aspiring pastry chef Zoe Washington, plans to spend her free-time preparing to audition for Food Network’s Kids Bake Challenge by interning at a local bakery. But when she receives a letter from her father who’s been imprisoned for murder since before Zoe was born, she secretly begins a correspondence with him. As Zoe gets to know her father better, she learns about inequality in the criminal justice system and strives to get her dad’s verdict appealed – all while perfecting a recipe for a signature cupcake. This book balances discussion of social justice, family connections, and mouthwatering descriptions of treats. 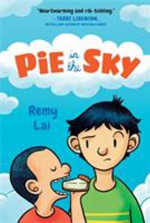 Jingwen has just moved to a new country -- but it feels like he’s landed on a new planet. School is torture, making friends is impossible because he doesn’t speak English, and he keeps getting stuck babysitting his very annoying little brother Yanghao. To distract himself, Jingwen plans to make fancy cakes like his dad used to make before he died. The only problem is, his mom won’t let the brothers use the oven while she’s at work, so Jingwen and Yanghao bake cakes in secret – carefully eating all the evidence before she returns home. This middle grade novel with spot-illustrations is a hilarious and heartwarming immigrant story filled with some tasty looking cakes. 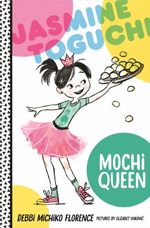 Jasmine Toguchi’s family is gathering to celebrate the new year and make mochi, sweet rice cakes from Japan. Though Jasmine is considered too young to help with the mochi-making like her older sister Sophie, she is eager to help out. Jasmine becomes determined to involve herself in the mochi-making process, despite being too young and a girl, and commits herself to proving to her family that she is strong enough to help the men pound out mochi – even lifting weights with her cousins. This intermediate chapter book is all about food, family, and togetherness – with instructions for attempting your own mochi to boot.

Bilal and his dad are making his favorite dish for dinner – chana daal – and Bilal invites his friends Morgan and Elias to help. Though the boys are excited to help prepare the classic South Asian dish, they begin to express a little uncertainty that it smells and looks funny. Bilal becomes worried that his friends won’t like his favorite food and spends the day worried as the boys play and wait for the daal to cook. When the meal is finally ready and the friends sit down to dine – the daal’s a hit! This foodie picture book is perfect for young food obsessed readers interested in exploring new cuisine and includes a daal recipe to try making your own at home. 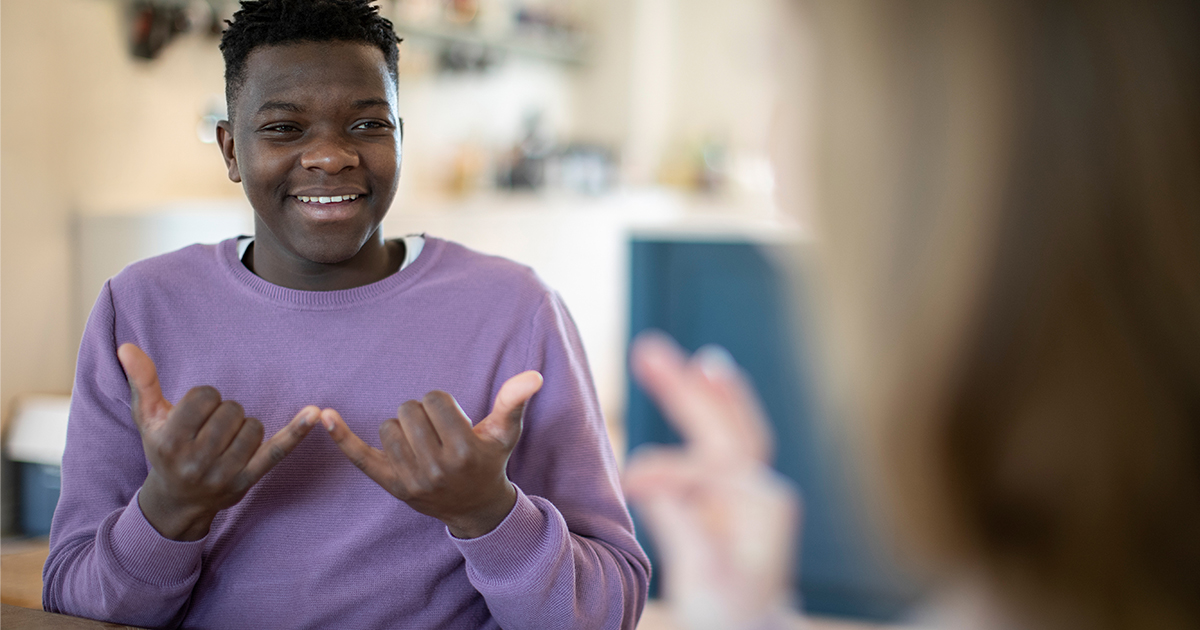 The value of written language is immense in any culture. But what if your culture doesn’t have a written system? In fact, about half of the world’s languages have no written form today. Deaf culture uses sign languages as their primary means of communication, but many members of Deaf culture don’t know sign language.

No culture deserves to be neglected or underrepresented because of its written form (or lack thereof). It is especially important for children to learn about cultures different from their own, and to see their own minority cultures reflected back at them in literature. Below is a list of books that feature individuals from Deaf culture, with a focus on literature for children.

This post is the fourth installment of Diverse Reads, a series that gathers books with diverse characters or authors: people who are LGBTQIA+, Native, people of color, gender diverse, people with disabilities, or ethnic, cultural, or religious minorities. I hope that these books help open a window for you into other worldviews. 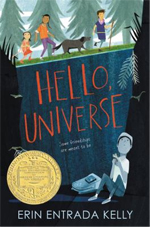 Valencia finds herself thrown together with her classmates on a summer day in this Newbery Medal-winning novel. Like many deaf and Hard of Hearing kids, Valencia doesn’t know any sign language, and she wears hearing aids that don’t work well with loud background noise. Her self-confidence and perseverance give readers someone to root for. 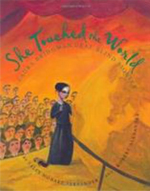 At age two, Laura Bridgman lost her sight, hearing, smell, and taste. At the country’s first school for the blind, Bridgman paved the way for future generations of children with disabilities, making possible important advances in the way they would be educated long before the likes of Louis Braille and Helen Keller. 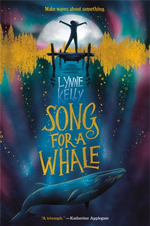 An amazing Deaf character named Iris lives in a world where her intelligence isn’t recognized in her home nor at her school. Her loneliness is reflected in her attempts to reach Blue 55, a whale who cannot communicate with its own kind. Iris and her Deaf grandmother communicate via sign language, which is especially rare in children’s literature. 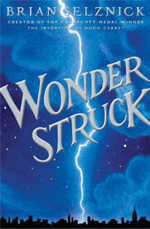 The stories of two deaf children who were born 50 years apart: Ben’s story is told in words, while Rose’s in pictures. This work is a unique attempt to track the changes to Deaf culture in America through stunning illustrations. 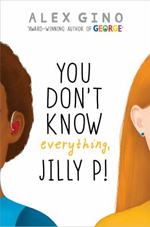 When her new baby sister is born deaf, Jilly makes an online connection with a fellow fantasy fan, who happens to be black and Deaf, and begins to learn about the many obstacles that exist in the world for people who are different from her. 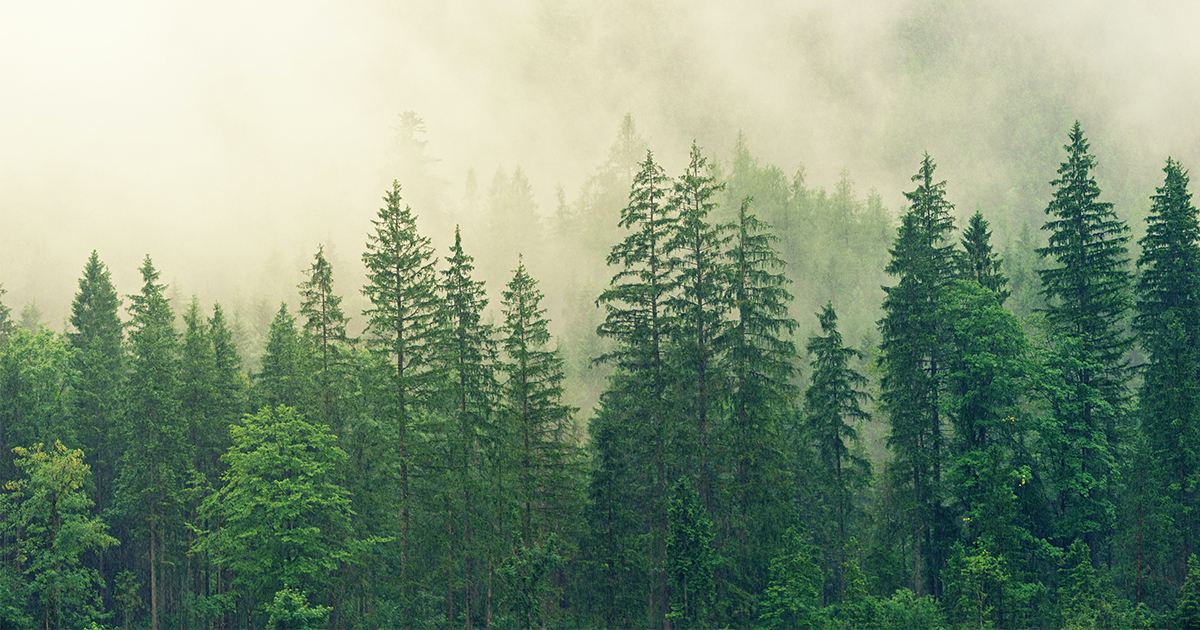 As any intrepid hiker knows, there is one thing all adventurers need to keep an eye open for while exploring in nature – the creature known as Bigfoot. You may be thinking that in Utah we don’t need to worry about Bigfoot, after all, most reported Bigfoot sightings have occurred in Washington state and California. You may be thinking that there are bigger threats in nature than the largely unknown cryptid. You might even be thinking, “There’s no such thing as Bigfoot.” But for the true believers, there is no better time to learning about sasquatch than in your childhood. Here are some good reads to get you started, just in time for hiking and camping season. 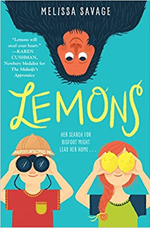 After her mother dies, Lemonade Liberty Witt is sent to live with a grandfather she’s never met in Willow Creek, California – Bigfoot Capital of the World. She’s sure that she’ll be able to move back to San Francisco to live with her teacher Miss Cotton soon, and so Lem doesn’t bother to try to make friends in her new, weird town. Especially not with Tobin, her neighbor and the president and founder of Bigfoot Detectives Inc. Reluctantly, though, Lem agrees to help Tobin hunt for the elusive Bigfoot. This is a humorous and heartwarming read for Bigfoot believers and deniers. 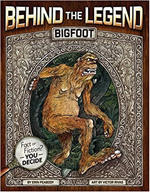 Let’s dive into the big question – does Bigfoot exist? For young cryptozoologists, this book is the best place to start. This middle grade informational title explores the legend of Bigfoot from all angles – explaining famous sightings, big hoaxes, and the mythological roots of the creature. With an easy-to-read narrative, plenty of elementary school humor, and black and white illustrations, young Bigfoot hunters will eat this book alive. 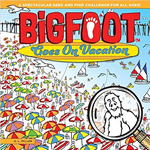 BIGFOOT GOES ON VACATION: A SPECTACULAR SEEK AND FIND CHALLENGE FOR ALL AGES!
By D.L. Miller
(2018)

If you stop and think about it, hunting for Bigfoot is sort of like LARPing a Seek and Find book. So what better way to get in the Bigfoot spirit than with a book full of seek-and-find challenges featuring our favorite monster on vacation all over the world? And, if you’re dying to be on vacation, this book also includes fun facts about vacation destinations to help transport you. Be sure to also check out BIGFOOT GOES BACK IN TIME. 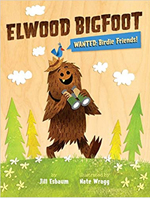 Did you ever stop to wonder if maybe we got it all wrong? Maybe Bigfoot is out there – and maybe he also just wants to be your friend. Elwood Bigfoot is three things – he is very big, very loud, and very lonely. All he wants is to befriend the little birdies who come near is cave, but whenever he tries to ask them to “STAY!” they fly away frightened. Elwood tries everything before realizing that his BIG personality might be scaring the birds away. You’ve never seen a cuter Bigfoot than Elwood, or had a better way to get your littles hooked on Bigfoot.