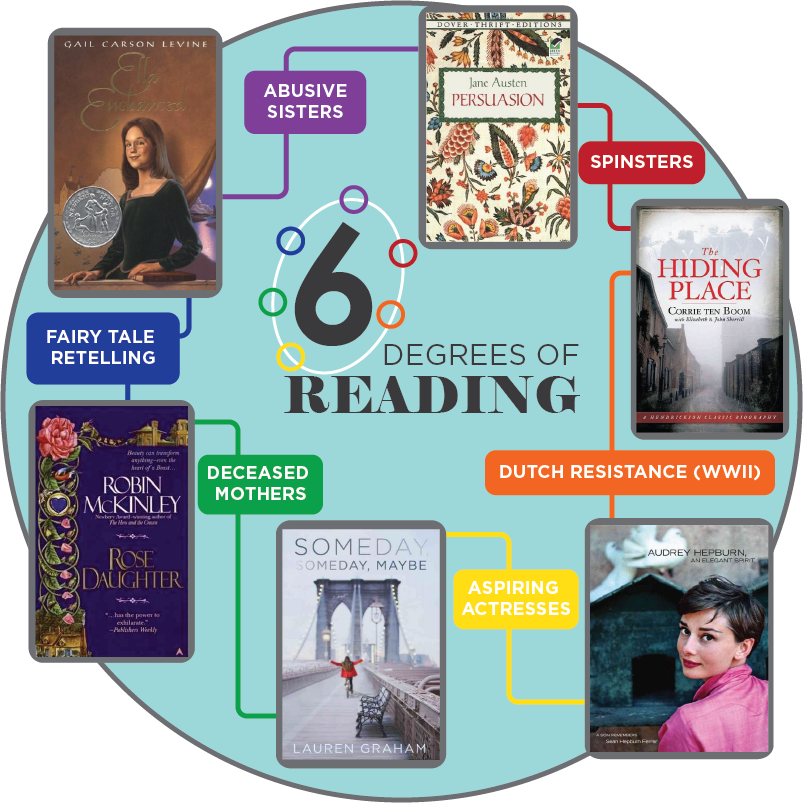 So, with no further ado, we bring you 6 Degrees of Reading, Abusive Sisters and Spinsters edition.

Eight years earlier, Anne Elliot’s friends and family convinced her to break off her engagement to Frederick Wentworth.  Now 27 years old and considered a spinster, Anne divides her time between her father and sisters, all of whom use and abuse her.  When Anne is reunited with Captain Wentworth, she feels the full weight of her regret.

Corrie Ten Boom never expected to be a political prisoner; the youngest daughter in a large, religious family, she lived an uneventful life.  Corrie, a self-described spinster, worked in her father’s watch repair shop and helped around the house.  During the Nazi invasion, however, she and her family leave their peaceful lives behind, joining the Dutch Resistance and housing runaway Jews.

Written by her oldest son, Sean, this biography follows Audrey from her boarding school days in London, through her teen years spent carrying messages and performing fundraising ballets for the Dutch Resistance during World War II, and into her early adulthood as an aspiring actress.  Ferrer understandably focuses in particular on Hepburn’s later experiences not only as a movie star but as a loving mother of two sons and on her extensive work with UNICEF.

When I saw that Lauren Graham, known for her roles on Gilmore Girls and Parenthood (two of my favorite shows), had published a book, I knew I had to read it.  Someday, Someday, Maybe follows young, aspiring actress Franny Banks, named after a character in her deceased mother’s favorite book, as she tries to establish her career in New York.

Robin Mckinley earned widespread acclaim for her first Beauty and the Beast retelling, Beauty, and her Newberry Award Winning fantasy novel, The Hero and the Crown.  Fewer readers are familiar with this second fairytale retelling of Beauty and the Beast, however.  Beauty, whose mother died years before, lives with her merchant father and sisters.  After losing all their money, the family moves to Rose Cottage, where Beauty discovers a deep love for roses and gardening.  Her father sets off to remake his fortune, but he ends up making a terrible bargain with a beast within a hidden castle.

In this fairytale retelling, Ella of Frell lives with a terrible curse of obedience placed on her in childhood.  As she befriends elves, conquers ogres, outsmarts the stepmother and stepsisters who use and abuse her, and falls in love, Ella never loses her spunk or her determination to break the curse.