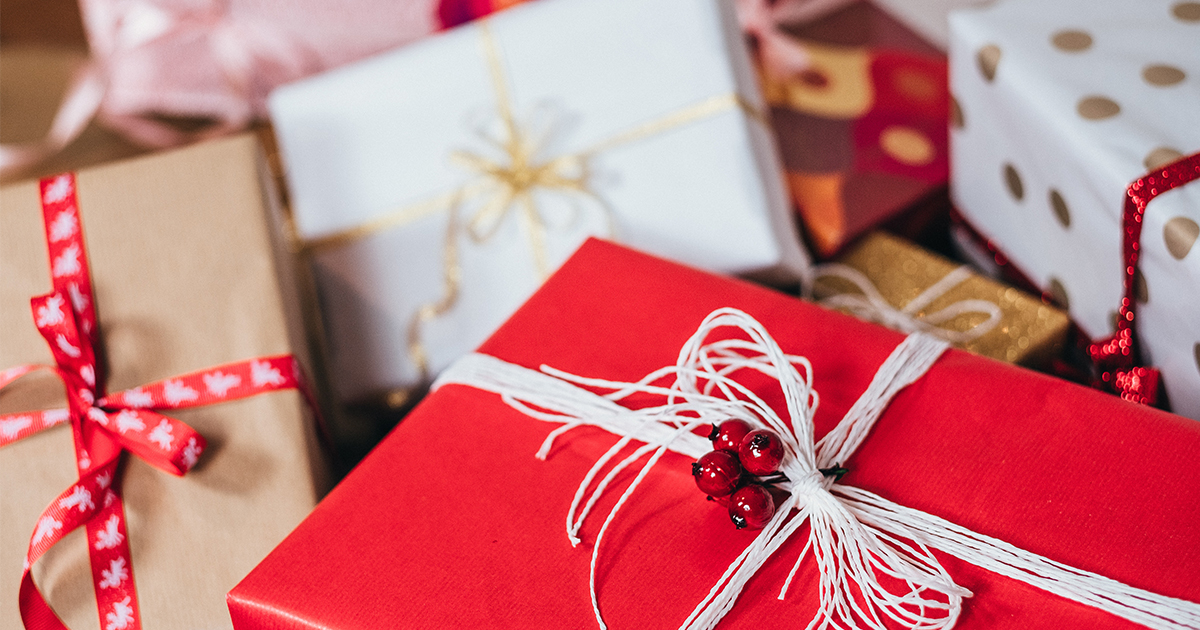 It’s that time of year when you are making a list and checking it twice. It can sometimes be hard to know what to give the teen readers in your life. Here is a handy gift guide that can help you know what to get this holiday season.

If Your Reader Loves Historical Fiction, check out these titles: 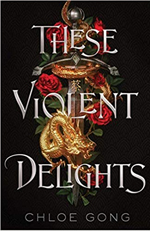 THESE VIOLENT DELIGHTS
By Chloe Gong
(2020)

This book is a re-imagining of Romeo and Juliet set in 1926 Shanghai. This intricately plotted story follows Juliette Cai who is the heir of the Chinese Scarlet Gang, and Roma Montagov, leader of the Russian White Flowers. The two fall in love but are torn apart by their rival gangs. They ultimately must work together when mysterious deaths threaten their city. For readers who love atmospheric world building and Shakespeare inspired fun, this is a lush and appealing read. 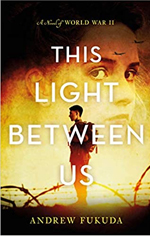 THE LIGHT BETWEEN US
By Andrew Fakuda
(2019)

Alex Maki is not happy when he learns that his pen pal from Paris, France is actually a girl named Charlie. But as the two keep writing, Alex and Charlie become dear friends. Neither expected to still be writing in 1941 when the US enters WWII. Alex and his family are put in a Japanese internment camp and Charlie, who is Jewish, must endure the occupation in a concentration camp. Alex ends up enlisting in a segregated company of the army in hopes that maybe he can help liberate Charlie. This is a well-researched, engaging book that is driven by Alex and Charlie’s special friendship. 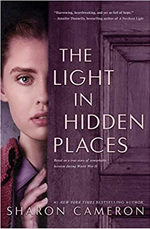 THE LIGHT IN HIDDEN PLACES
By Sharon Cameron
(2020)

Stefania Podgórska has known the Diamant family for over four years. She loves Izio, one of the Diamant’s sons. Life is good, until the Nazis come to Przemsyl, Poland. The Diamants are Jewish and are forced into the ghetto and work camps. Stefania, who is Catholic, is devastated when only Max Diamant is able to escape. She decides that she has had enough of the Nazi’s occupation. So, she decides to help everyone and anyone she can, ultimately hiding thirteen Jews in her attic while also caring for her younger sister, Helena. However; this becomes almost impossible when two Nazi’s begin living in her house. For a gripping, emotional read, pick this book!

If Your Reader Loves Contemporary Romance, check out these titles: 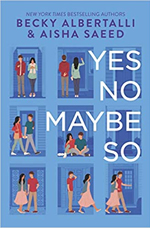 YES NO MAYBE SO
By Becky Albertalli and Aisha Seed
(2020)

Jamie Goldberg thinks of himself as an awkward nerd who is afraid to speak to other people. Something embarrassing always happens. But his family is deeply involved with the local state senate candidate’s campaign. When he gets “talked into” canvasing neighborhoods, Jamie figures it is his worst nightmare. But when he is paired with his beautiful classmate Maya Rehrman to canvas a particular neighborhood, he thinks things are beginning to look up. It is so fun to see the growing relationship between Jamie and Maya. Jamie, who is Jewish, and Maya, who is Muslim, must deal with a lot of racism as they become engrossed in the canvasing process. As they try to come to terms with the prejudice in their lives, they become stronger friends. This book is great for anyone who is passionate about politics, Instagram, or making a difference in the world. 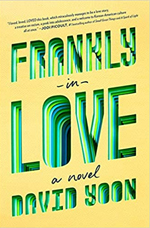 18-year-old Frank Li has always known that his Korean immigrant parents want him to date a nice Korean girl and go to Harvard. So, when he falls for Brit, a girl his parents would never approve of, he concocts a zany plan to fool his parents by “fake dating” Joy, a Korean girl who is a close family friend. He will “go on a date” with Joy, drop her off to be with her secret boyfriend Wu, and then go on a real date with Brit. The plan seems perfect for both Frank and Joy, but when they start to have real feelings for one another, things get complicated really fast. Frank is on the cusp of adulthood and is trying to figure out how to be separate from his parents, but Frank soon realizes that he doesn’t really understand that his parents are actual people with fears, hopes, and dreams. With rich characterization of authentic culturally diverse characters, this novel is a delight for anyone who loves deep, rich family dramas wrapped up in a sweet romantic comedy shell. 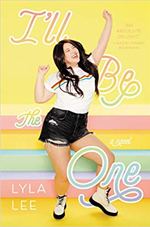 Skye Shinn wants to be a K-pop (Korean Pop) phenomenon, singing and dancing her way into fame. She has the moves. She has the high notes. She has the sassy personality. The only thing she doesn’t have is the size 00 of a K-Pop star. Her entire life, her mother has told her the fat girls shouldn’t dance, or wear bright clothes, or be on television. But Skye wants to prove her wrong, so she auditions for an American K-pop competition called “You’re My Shining Star.” Everyone is surprised at her talent, but one judge is explicit that fat girls can’t make it in K-pop. But Skye only needs the votes of the two other judges and she is in! Skye soon becomes immersed in the auditions and meets amazing new friends. Will Skye lose herself in the K-Pop culture and forget all the things she is fighting to prove? You don’t have to be a K-pop fan or even know what it is to enjoy this delightful novel about the power of one confident girl.

If Your Reader Loves Fantasy, check out these titles: 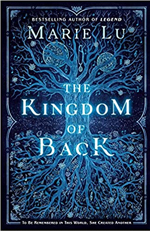 Nannerl Mozart was destined to be a child prodigy. She even played before royalty, but the appearance of her younger brother Wolfgang made her miss a note. Now everyone is focused on Wolfgang and Nanerl is pushed into the shadows of housework and preparation for marriage. She is desperate to have her music heard by the public, so when a mysterious magical entity named Hyacinth promises her that she will be remembered, Nannerl makes a pact. She will help Hyacinth regain his crown in the Kingdom of Back. But when events start to tumble out of control, Nannerl must be brave and save her brother, the world, and most of all herself. Filled with all the best parts of historical fiction and fantasy, this compelling and well researched novel will sweep you away into a magical kingdom where nothing is as it seems. 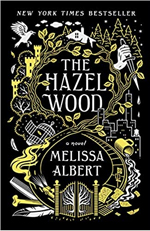 Seventeen-year-old Alice doesn’t have time for fairy tales. Especially the fairy tales from Tales of the Hinterland, penned by her grandmother Althea Proserpine. She is constantly avoiding the cult-like fans of the book, while also trying to keep her mother Ella out of trouble. And trouble seems to follow them everywhere. When Ella goes missing, taken by a figure who claims to come from The Hinterland, Alice must join forces with a die-hard fan of her grandmother’s dark fairy tales, Ellery Finch. Together they begin the search for Ella and are led to her grandmother’s mysterious estate The Hazelwood. If your reader loves fairy tales and the sometimes dark truths that they hold, this book will be an especial treat. This has several companion novels, so also look for the sequel The Night Country—A Hazel Wood Novel and Tales from the Hinterland. 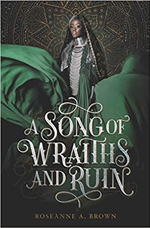 In this story based on West African folklore, refugee Malik and his sisters travel to Ziran to work at the Solstasia festival. The festival only happens once every 50 years. After an encounter with a malevolent spirit, Malik finds himself making a pact to kill the princess of Ziran in order to save his beloved little sister. Meanwhile the princess of Ziran, Karina, is pushed into leading Ziran after her mother the Sultana is assassinated. Karina doesn’t want to rule, so she plans to resurrect her mother through necromancy. But the price is steep, the heart of the king, so Karina creates a contest for suitors. The winner will receive her hand in marriage. Malik takes this opportunity to get close to the princess. This places both on a crash course for disaster. This book has so much going on, but the world-building is impeccable. With elements of mystery and romance, this fantasy novel has something for everyone.

If Your Reader Loves Science Fiction, check out these titles: 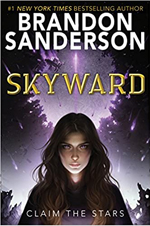 Spensa Nightshade has always lived under the dark shadow of her father’s desertion. She is determined to prove that the Nightshades are worth something as she enters the flight academy. Her world, Detritus is under attack from Krell raiders who have driven her people underground. The need for defense pilots is great, and Spensa dreams of being a starfighter. Hailed as the cross between Katniss Everdeen and Conan the Barbarian, this series starter is a wild ride. Also look out for the next in the series, Starsight. 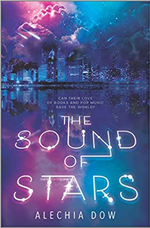 This book is set after the invasion of the Ilori, beings made of electricity that want to turn Earth into their next vacation spot. More than 1/3 of earth’s population has been wiped out. Humans are being kept in lock; they are not allowed to read or listen to music because that makes them “rebellious.” Janelle is running a clandestine library, until one of her books goes missing. This could lead to a death sentence. But the Ilori who found it doesn’t turn Janelle in. Instead, he talks to her. M0RR1S is a lab made Ilori whose sole existence has been to create a vaccine to subjugate the humans so the True Ilori can take over their bodies. But then he finds the human’s music, ostensibly to study it. Music makes him feel alive in ways he has never felt before, especially the music of the human called David Bowie. Janelle and M0RR1S are immediately drawn to one another, and not just because they both love music and books. M0RR1S soon determines that the humans must be saved, especially Janelle. This determination sends them on a road trip with a bag of books and their favorite albums in a race to save humanity. The Sound of Stars has something for everyone. It’s post-apocalyptic, dystopian, Science Fiction, and romance. But most of all, it is a delight. 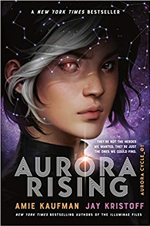 Tyler Jones is an overachieving legionnaire who is all set to choose his space squad, but on Draft Day he is busy rescuing a girl cryogenically frozen girl from a ship full of dead bodies. Tyler is left with just the misfits of the academy for his squad. The frozen girl, Auri, has to deal with being 200 years behind everyone else. When Tyler’s team runs into her on their next mission, Auri will lead them into what could be a catastrophic war.  This book is classic Sci-Fi, there are space ships, gadgets, and artificial intelligence. Tyler’s team is so randomly awesome. Basically, this book is like a space buddy movie in book form.