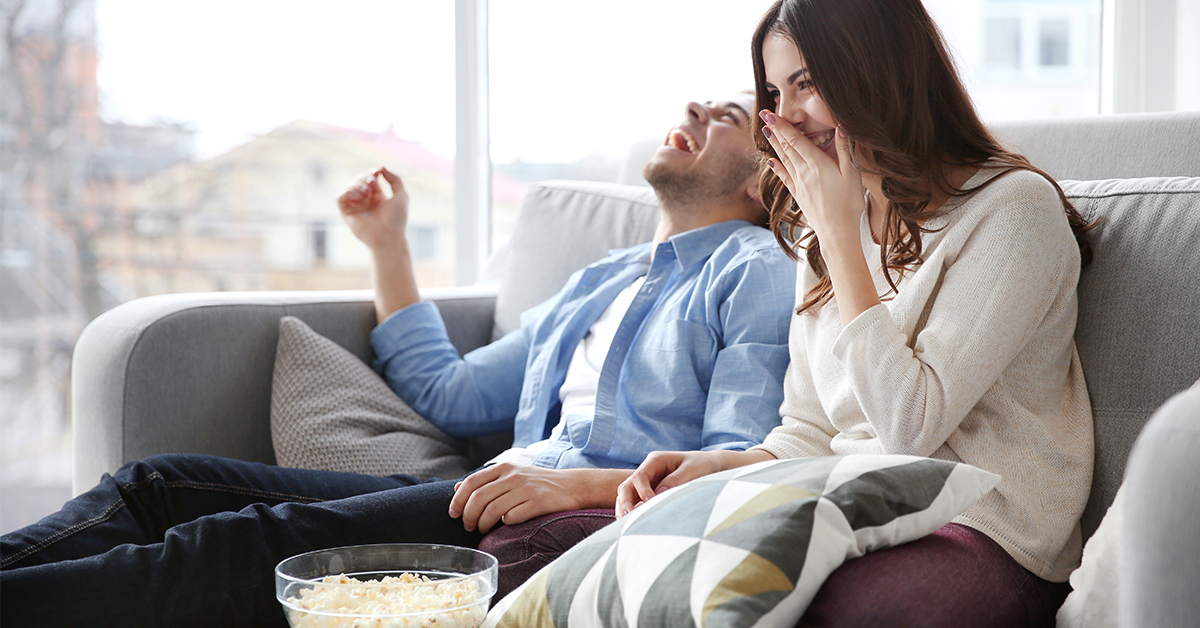 There are a lot of good reasons to read, and many of them are important reasons: it develops empathy, it encourages creativity, it makes you a more informed and thoughtful citizen, it reduces stress, it builds your critical thinking skills, etc. All of that is wonderful, but there's another, often ignored reason why reading a lot is great - it makes pop culture more fun.

Once you start watching for them, you'll notice literary references all over the place, and one of my favorite feelings is watching a sitcom and catching a joke I would have missed if I hadn't read a particular book recently. These are just a few of my favorite bookish jokes from recent TV shows.

Jess's day bonding with her boyfriend's daughter is ruined thanks to Nick. 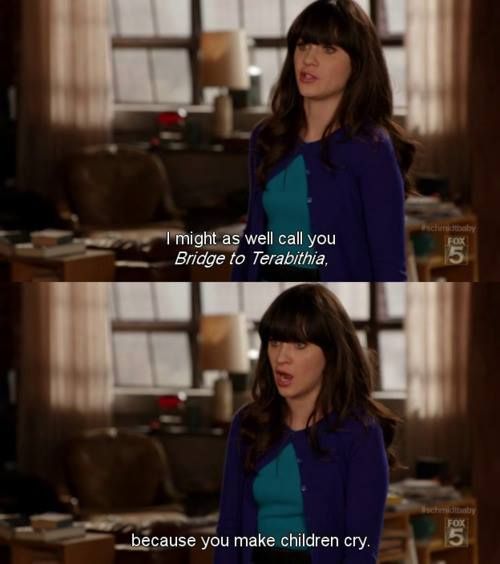 Chris reads too much into Ron's woodworking lesson.

Amy reveals that she's considering a job in another precint, and Jake feels betrayed.

Ted: Oh, guess who I ran into. A girl from my past. Any guesses?

Lily: The girl who beat you up.

Barney: The girl who ruined a photo with Slash!

Marshall: The girl who made you get the butterfly tattoo?

Ted: You make it sound like I've dated a series of Stieg Larsson novels.

Hoping to impress her new boyfriend, Mindy dresses in a series of punny Halloween costumes. 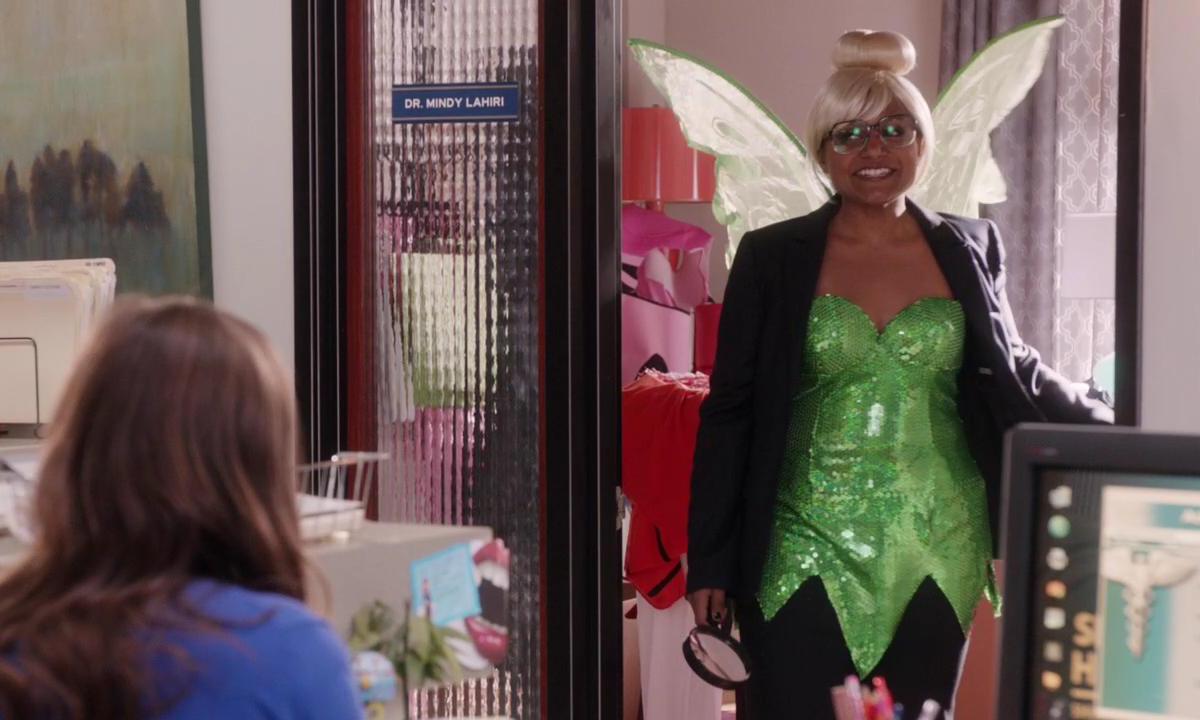 Referencing: HARRY POTTER AND THE SORCERER'S STONE
By J.K. Rowling
(1997) 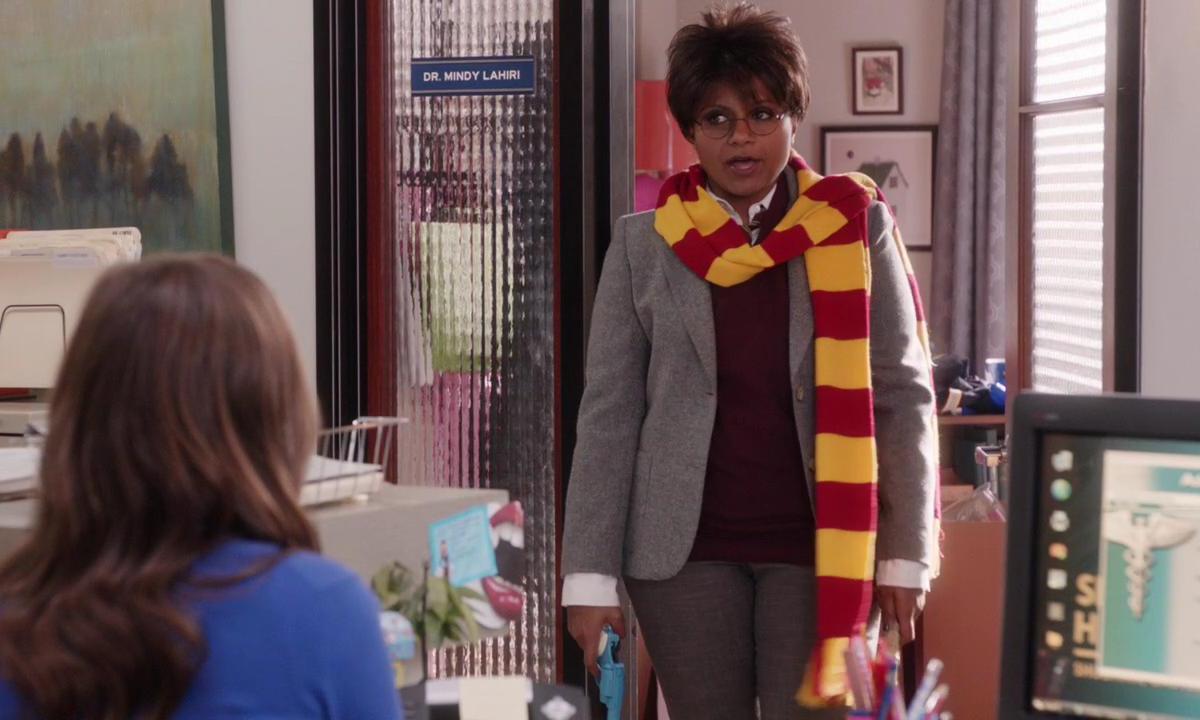 Referencing: LITTLE HOUSE ON THE PRAIRIE
By Laura Ingalls Wilder
(1935) 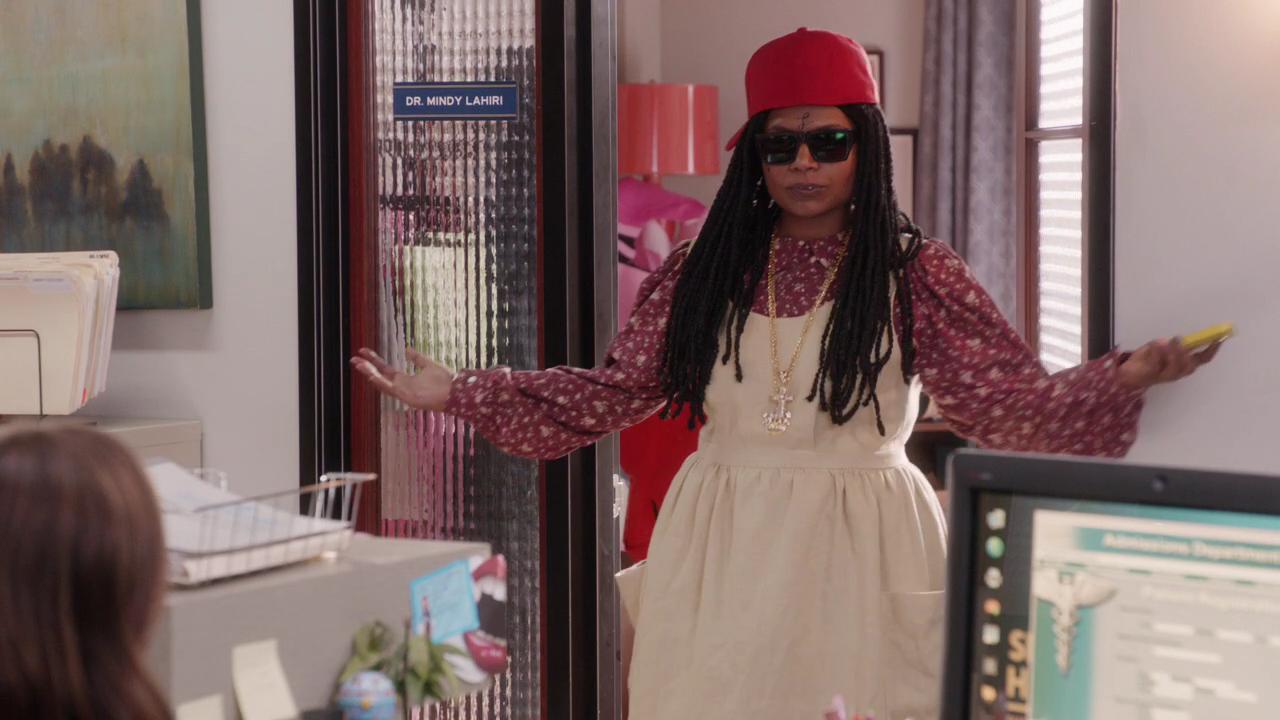 Lil' Wayne on the Prairie

Referencing: The works of Plato and Aristotle

Chidi spends weeks trying to teach Eleanor the history of philosophy, hoping that an understanding of ethics will help her keep her spot in The Good Place. Unfortunately, it doesn't seem to be sinking in. 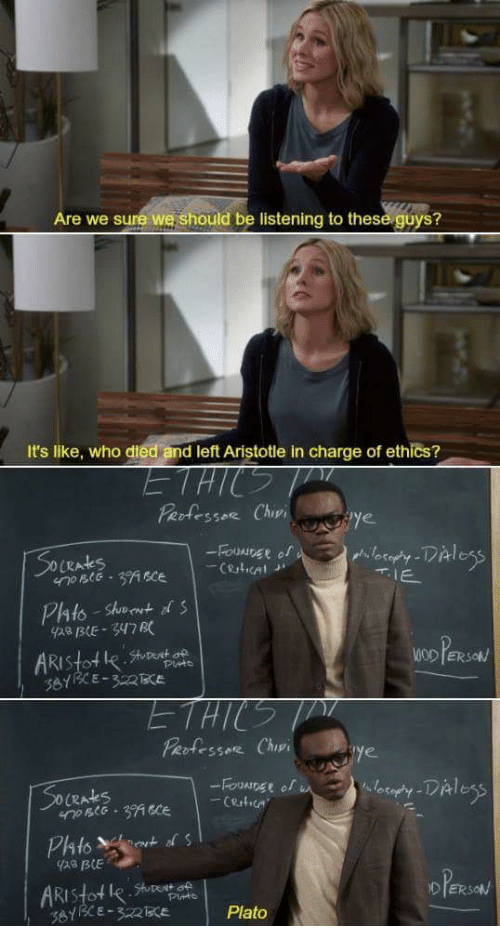 Lorelai’s not sure if her “will-they-won’t they” relationship with Luke has actually turned into something after he’s asked her to a movie and to his sister’s wedding.

Bonus joke: In Gilmore Girls: A Year in the Life, Rory has taken on running the Star's Hollow Gazette only to find the staff aren't especially efficient. When Ethel refuses to answer the phone because she's busy with paperwork, Rory replies: “I don’t want to say you’ve been filing that same piece of paper for a long time, but when you started, Nora Ephron felt good about her neck.”

FRIENDS (Episode 3.13 "The One Where Monica and Richard are Just Friends")

Referencing: THE SHINING
By Stephen King
(1977)

After Rachel finds Joey's copy of THE SHINING in the freezer (where he puts it when things get too scary), they agree to swap favorite books. She'll read THE SHINING if he'll read LITTLE WOMEN. 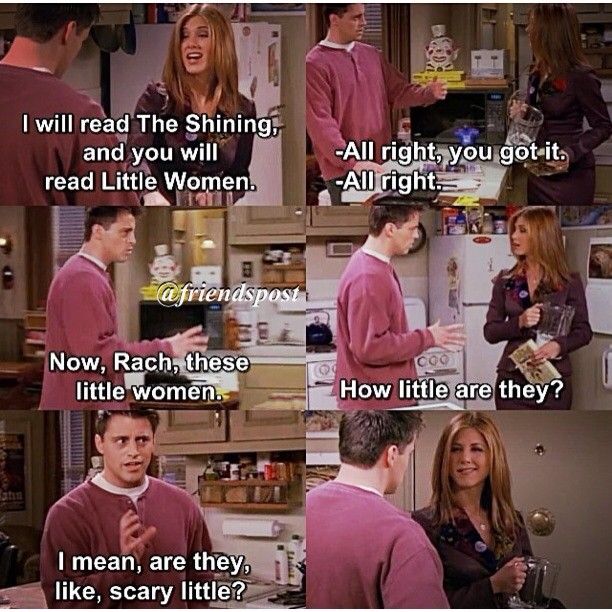 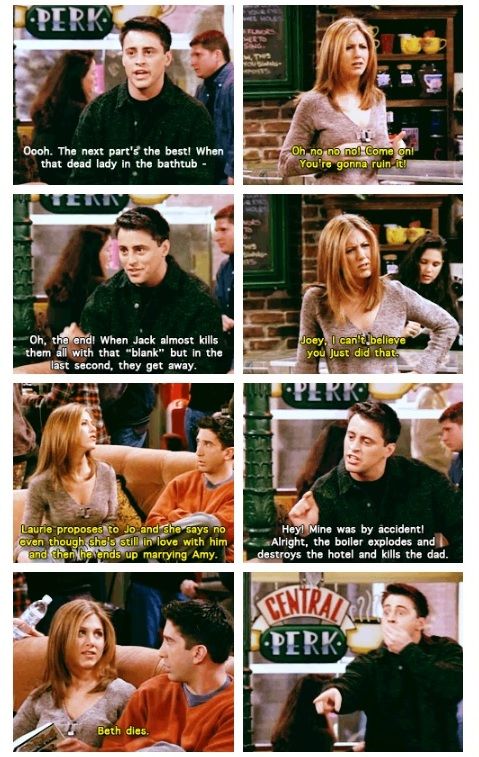 Once again, things get a little too scary.

"Reverend" Richard Wayne Gary Wayne unexpectedly wins over the jury while on trial for Kimmy's kidnapping. 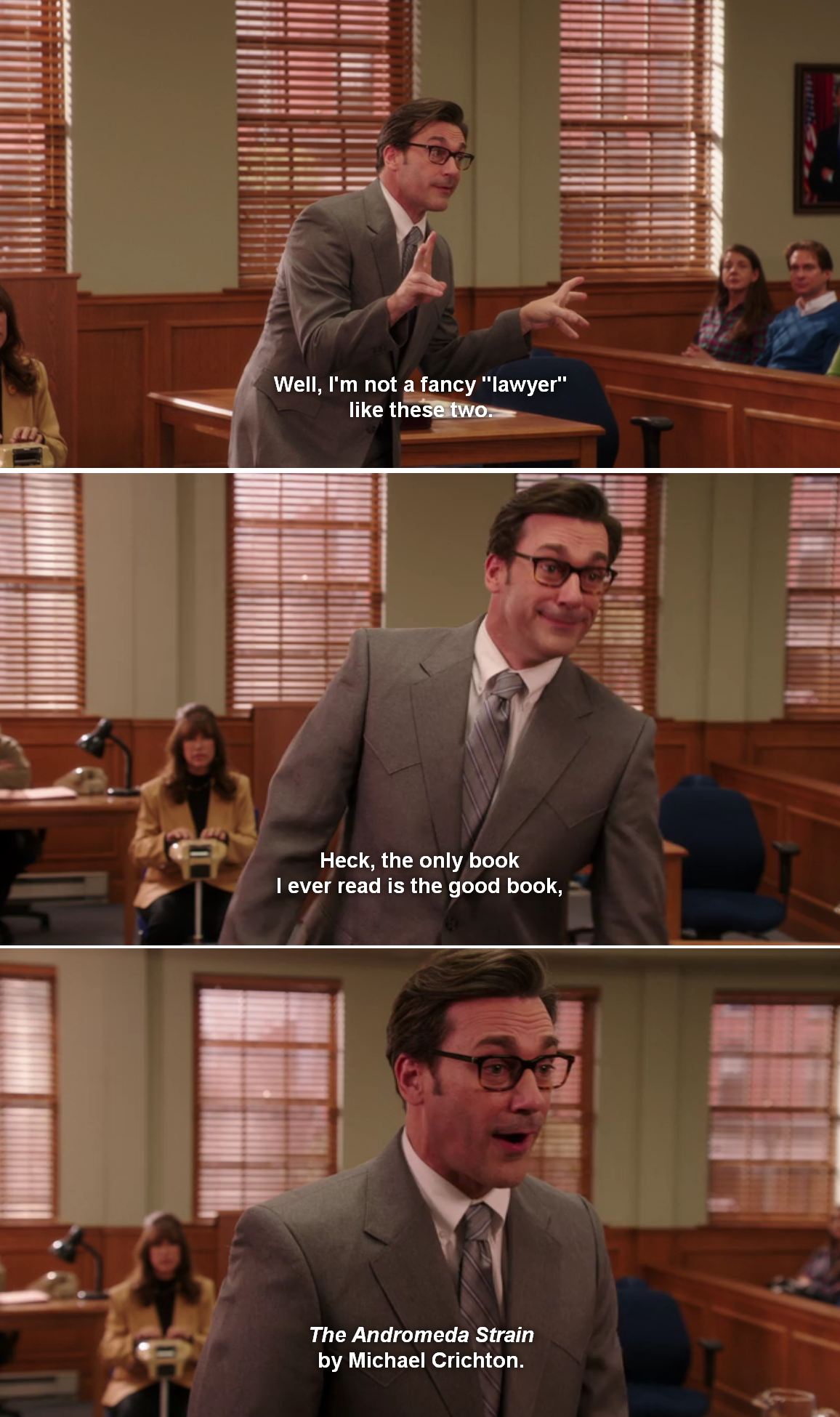