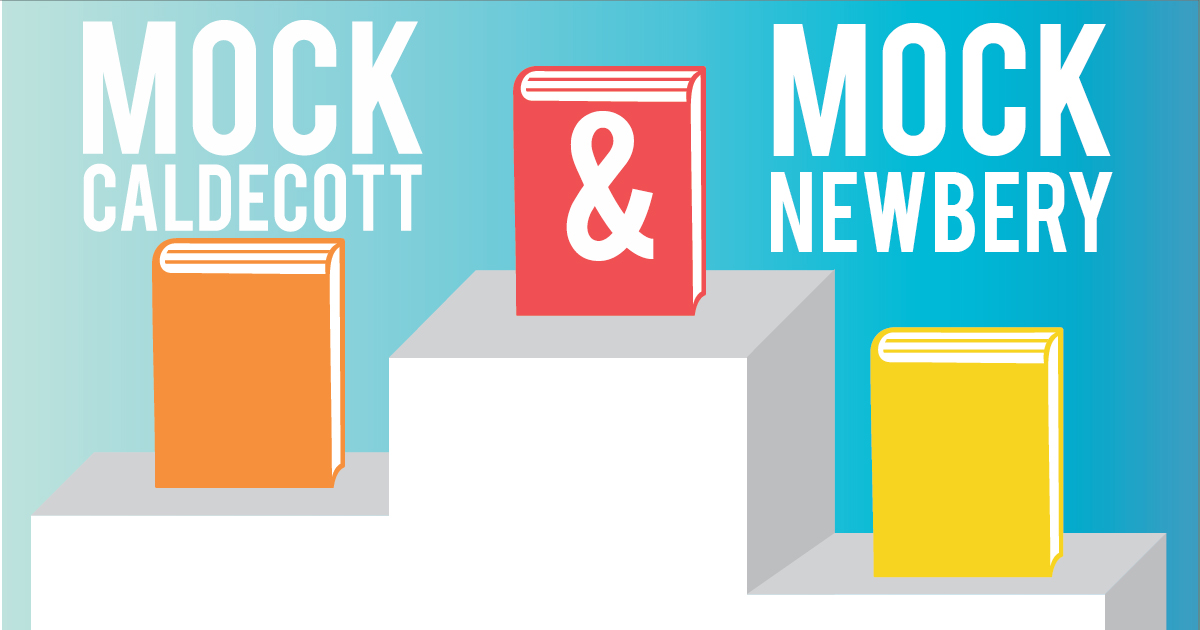 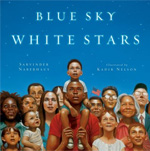 In this patriotic book Naberhaus compares the United States flag to the country—both the people and the land. The blue sky and white stars could be a part of the flag—or it could be the blue sky full of white stars above the Statue of Liberty. There are “sea waves” that lap against our shores or we can “see waves” of the flag as it flutters in the breeze. Each page depicts a different part of patriotic zeal associated both with the symbols of the United States and with the parts and people of the country. And of course we have to talk about the illustrations! These illustrations are quite stunning. Nelson has managed to depict scenes that one Mock Caldecott attendee described as a “modern day Norman Rockwell type of illustrations.” Needless to say many in our group were quite enamored with the details and expressions in the pictures. 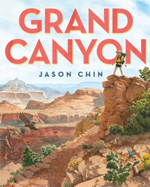 This is one of my favorite books of the year. In it Chin talks about the different parts of the Grand Canyon—one of the most iconic landscapes in North America. Not only does it tell about how the canyon was formed, but it also goes into detail about the geological layers, the flora within the different regions of the canyon, and what fauna can be found there. Also, this information all comes about through the well-written text. But the true star of the book is in the illustrations. The main illustrations depict a story all on their own of a girl and her father as they camp and hike through the Grand Canyon. Plus those illustrations look like they are placed on top of animal or nature field guides that showcase the various wildlife and plant life and habitats within the area. If that wasn’t enough, the illustrations also have some cut outs—which help to show readers the past life of fossils or rocks that the characters see while on their trip. The illustrations give a life and purpose to knowing all the facts and details listed in the text—and it increases a reader’s desire to visit that great National Park! 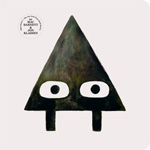 This is a tale of two shapes that are friends. Triangle lives in a triangle house among shapes that are triangles for a landscape. Square lives in a square house in a place with square shapes all around. One day Triangle goes out on a quest to play a “sneaky trick” on Square. And he succeeds in scaring Square—which in turn causes Square to want to retaliate by playing a trick on Triangle. The beauty of the illustrations of this book are most prominent in the shapes themselves—specifically the expressiveness in their eyes. These little oval spheres with black dots convey such emotion! How in the world Klassen can indicate what each shape is thinking just through the eyes is remarkable. And one of the main reasons as to why this was one of our Mock Caldecott Honor picks. 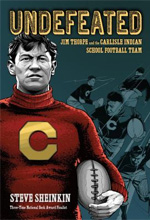 Sheinkin tells the story of how Jim Thorpe, Pop Warner, and many others changed the way football is played today. Most people know about Jim Thorpe as a football player, but the background of where he came from, the atrocities that he and his classmates endured, and those other teammates that shaped the game of football are less known. The beauty of this book is that even though this is a book full of facts and bits of history it doesn’t read like a boring textbook. In fact, many of the Mock Newbery participates don’t even like football—yet they really liked this book! With phenomenal writing and a good story it isn’t a surprise that this book was a strong contender. 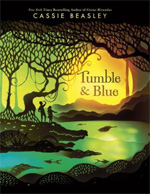 This is the story of Blue (who no matter what loses at anything he tries) and Tumble (a girl who more than anything wants to be a hero to save the day). When Blue is dropped off at his grandmother’s house just before a magical chance to change their fates—if they figure out how to meet a crocodile with magical abilities—he is hopeful that this will be the beginning of good things. Tumble does not believe in all the fate/destiny talk that Blue’s family is certain of, yet she does believe in helping Blue navigate his bad luck. This magical realism story is well-written for the intended audience. The discussion, comments, and love that we had for this book made it quite a strong contender. Some of the strengths that we especially liked were: the characters, the setting, the pace, the dialog—well, just about everything! It was refreshing to see not only the main characters grow throughout the story, but the minor characters seemed well-developed as well. 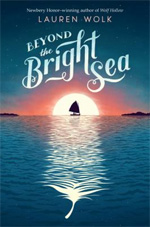 Mock Newbery Honor: BEYOND THE BRIGHT SEA
By Lauren Wolk

Crow is uncertain where she comes from. She knows that Osh rescued and has raised her—and she loves him. Only, she can’t stop wondering about her past. When Crow starts looking into the history of an island that housed a leper colony she finds more mysteries and danger than answers. We not only knew Crow and Osh and Miss Maggie, but we knew the Elizabeth Islands and the historical setting when the story takes place.  Along with the characters and the story, particular phrases and sentences stuck with us long after we read the book. Wolk is a master wordsmith. And this book received quite a bit of love at our Mock Newbery event.