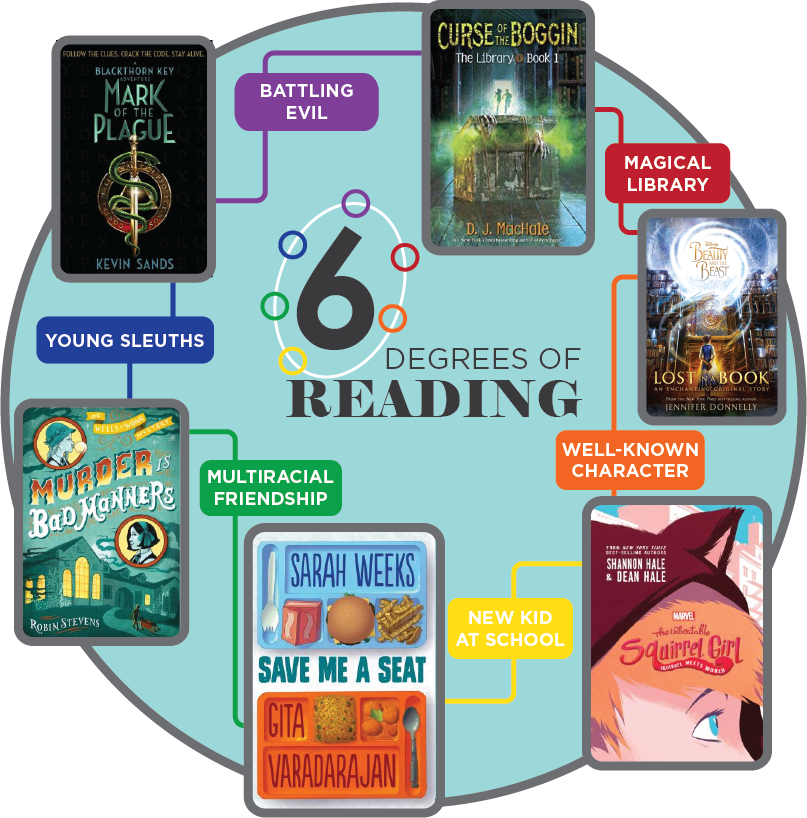 So, with no further ado, we bring you 6 Degrees of Reading: Friendship and Fighting Evil (in Juvenile Fiction).

Marcus, an orphan, starts having random supernatural experiences.  As he tries to figure out what is going on, he finds out that his birth parents left him a large brass key that opens the door to a magical library.  In the library are histories of supernatural experiences, some of which are still being written. Marcus finds himself battling terrors to discover the truth about the library and himself.

This take on the classic Beauty and the Beast offers well-known characters intriguing new challenges. Soon after Belle arrives at the Beast’s castle she discovers a magical book in the library that takes her to the wonderful land of Nevermore. She knows it isn’t a real world, but the Countess of the world promises it could be real if she gives up her life with the Beast.

You may not recognize Squirrel Girl immediately, but she is a well-known character to avid Marvel fans. Doreen was born with a squirrel tail and the ability to talk with squirrels.  Her parents urge her to keep her tail hidden (so that other kids don't feel bad that they don't have one), but when Doreen moves to another state and another middle school. As the new kid in school, Doreen finds it hard to both make friends and keep her amazing Squirrel Girl abilities a secret.

In India, Ravi was the top student and the best at cricket.   But now, as the new kid in a new school, he finds himself stuck in a remedial class. At his old school Ravi would have never associated with a kid like Joe, who is big and awkward and has a learning disability.  But now the two find themselves stuck in class together, finding unlikely friendship as they become victims of the same bully. This is a great tale of multiracial friendship without borders.

Hazel Wong is from Hong Kong and has come to boarding school in England.  She is befriended by one of the most popular girls in her grade, Daisy Wells, and they form a secret detective agency.  All too soon they have their first grisly case.

Christopher is living in his old master's workshop while plague rages through London.   One day he hears about a strange "prophet" who is going around town foretelling who will get the plague next.  The young sleuth begins to wonder who and what the "Prophet" really is and what connection he might have to Christopher’s old master. In an attempt to save lives, Christopher and his friend Tom risk their lives to battle the forces of evil.