Growing up, there are some foods that I just assumed were gross. Foods I associated with bad cafeteria fare; you know the ones. Meatloaf. Chicken Fried Steak. And, of course, Sloppy Joes.

As an adult, I’ve come to realize that these foods are not inherently gross! In fact, ever since trying this recipe for Sloppy Joes, I’m convinced that there are tons of ways that Sloppy Joes can go right in such a way that I actually prefer them to their less messy hamburger cousins.

When I was restocking our Used Book Store this month, I was delighted to find that the adult department has been weeding our cookbook section, which means that the nonfiction section of our book store will be full of a variety of gently used cookbooks for the next month or two. The title PARENTS NEED TO EAT TOO (by Debbie Koenig) jumped out at me, as I’ve found myself in that terrible time of parenting a toddler that has me constantly saying things like, “Chips are not real food,” and “You have to eat something other than cheese!” After these endless conversation loops, I find myself with less and less motivation to cook something real for the adults in the house that will actually eat real food. Am I willing to pay $1 for a cookbook written by someone who gets me? Why yes, yes I am!

This book is divided into chapters that helpfully propose a variety of solutions to the lack of time/energy that new parents often face. There is a chapter on cooking with pantry staples, a chapter devoted to slow cookers, etc. This recipe comes from the chapter devoted to big batch cooking, an idea that you cook one recipe but make enough to stock your freezer with a few ready-made meals for those days when you just can’t even.

These Sloppy Joes were nice and tangy, and the chipotle pepper adds just the right amount of smoke and spice. I was initially worried that the sauce-to-meat ratio would be off (it just didn’t look like enough sauce!), but it turned out to be just enough to coat everything nicely without being TOO sloppy. We halved the recipe, and it still made enough for us to have a generous amount of leftovers. We’ll be making these again soon! 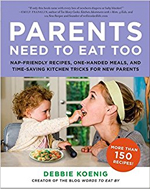 Koenig recommends mixing all your sauce ingredients together in a 2-cup measuring cup while your other elements are cooking. I second this recommendation. I do not necessarily recommend allowing a toddler to help you with said mixing, but we avoided major disaster and only forgot the chili powder.