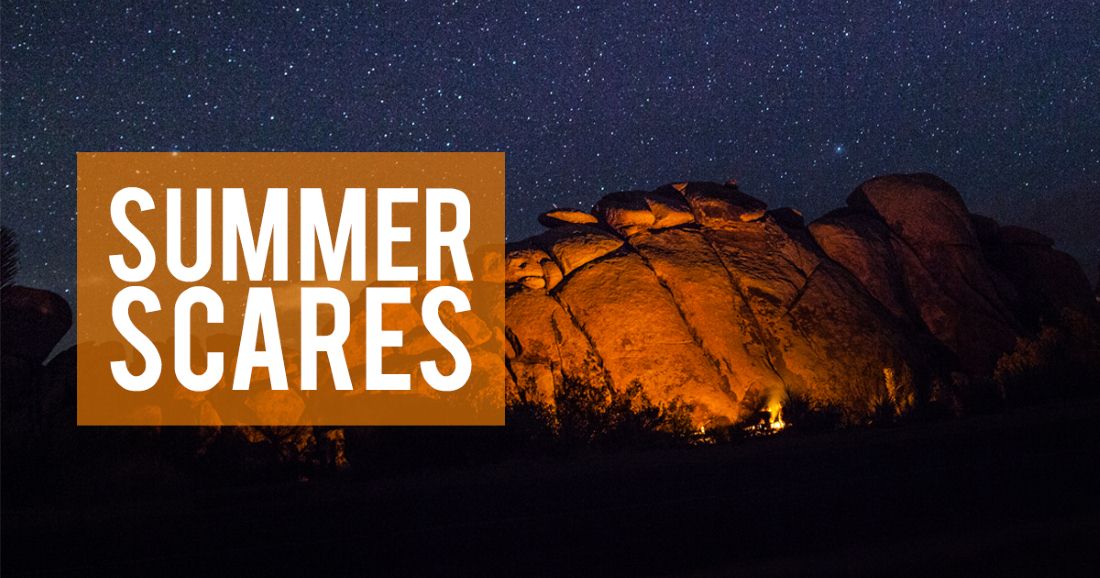 Thinking about dark, blustery autumn nights may tempt you to consider October the best time of year for a good scare. And I’ll admit that sitting in the glow of my neighbor’s orange Halloween lights is great for reading Poe. But if we’re all being perfectly honest with ourselves, summer is way scarier. This is the time of year for summer camp hazing rituals, midnight dares, and campfire stories. There’s really nothing to compare with the thrill of being out in the woods after dark, cut off from the rest of the world, when someone starts sharing their most recent nightmare or otherworldly experience.

In the spirit of the season I’ve been reading a lot of ghost stories, but as a children’s librarian, my book selections are pretty much anchored in juvenile fiction. Even darkly tinted kids books tend to be rather charming, so I’m not breaking any fear records with my choices. However, for those who are starting to anticipate some summer scares like I am, here are 5 themes I’ve noticed in “scary” supernatural children’s literature. This list is by no means complete, but hopefully it will give you some things to consider as your family prepares their summer reading lists.

The evil stepmother trope is so familiar to us that it’s almost more common now for authors to subvert it. If you’re interested in reading books that make stepmom the hero, children’s horror isn’t a bad place to go. Why? Because it’s never the obvious suspect. The book may start with the protagonist suspecting his or her stepmother of malicious intent, but ultimately they realize they misjudged their stepmother and end up working together. Two of my favorite stepmothers appear in THE CROSSROADS and NIGHTMARES!.

2- Silliness is stronger than the bonds of death

Not all ghosts are scary, even if they appear to be initially. There are plenty of children’s books that feature protagonists who make friends with the hilarious and often pessimistic dearly departed. These books are especially fun because they are light-hearted enough to make you laugh but have just enough spooky to keep you reading. A couple of good ones include GHOSTHUNTERS AND THE INCREDIBLY REVOLTING GHOST and THE HAUNTING OF GRANITE FALLS.

3- The fate of the world will always, inevitably, lie in the hands of an 11-yr-old

I don’t know the actual percentage, but if I had to guess, I’d say 70% of the books on the children’s side feature some heroic/chosen kid that has to save the world… or at least their neighborhood. This theme definitely sticks in supernatural fiction, often because kids are the only ones who can see the ghosts/monsters or because they make terrific bait. I’ve mentioned several titles that fit this description already, but two more are THE SCREAMING STAIRCASE and HOW TO CATCH A BOGLE.

An already familiar theme in supernatural fiction is that someone usually dies because no one believes the protagonist is actually being haunted, hunted, cursed, etc. In children’s literature, those disbelievers are the adults. Either a child assumes the adults in their life won’t listen, or they get no helpful response after explaining a supernatural situation. Two good reads that stick with this theme are DOLL BONES and THE SHADOWS.

No book on the children’s side will ever be as scary as some of the more intense stuff in adult literature, but that doesn’t mean we don’t hold our own. I mean, who isn’t terrified by CORALINE? Interestingly, some of the scariest stuff on our side comes from short story collections that are great for adapting to a campfire setting. A good example is HAUNTED HOUSES. Other authors, probably chasing after the success of the Goosebumps series, have written longer stuff for those kids that just love to be terrified. These authors create material with all the makings of a hollywood horror movie, just minus all the sexiness and plus a lot of intense pre-teens. My new like is SHADOW HOUSE SERIES, BOOK ONE: THE GATHERING.