Laughing Through It: Funny and Heartfelt Books About Mental Illness

Details
Written by Shaina
Published: 24 May 2017

Did you know that May is Mental Health Awareness month? I would guess that, if we haven’t already, all of us will at some point experience our own mental health struggles or have someone very close to us who does. Just like the rest of our bodies, our minds can go through periods of wellness and periods of poor health, and they deserve care and treatment.

A generation or two ago, these struggles might have been kept quiet. Fortunately, our culture is becoming more accepting of and open about mental health. For instance, you might have heard about the Heads Together campaign, spearheaded by younger members of the British royal family, or about the Campaign to Change Direction. Programs like these aim to reduce stigma against mental illness, to educate, and to provide mental health resources.

In recent years, memoirs dealing with mental health, including some REALLY funny memoirs, have become common. Their humorous but honest approach can remind us that we aren't alone and keep us laughing. Here are a few of my favorites. 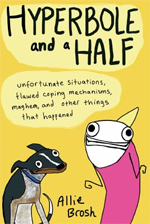 Even if you’ve never heard of Brosh or her blog, you’ve probably seen her CLEAN ALL THE THINGS! meme. Brosh blogs about everyday life using a mix of text and crudely drawn webcomics. In addition to sharing hilarious stories about grammar, her childhood, and her dogs, she has also written about ADHD and, famously, depression.

Whether in book or blog form, HYPERBOLE AND A HALF might just be the funniest thing I’ve ever read.

I’ve been eagerly awaiting her second book for a couple of years now, but its expected release date has been pushed back from 2017 to 2050. I’ll be impatiently waiting into old age, it appears. 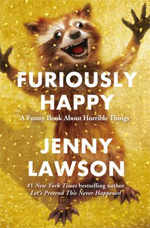 Jenny Lawson (a.k.a. the bloggess) is another author who started out in the blogosphere. She writes irreverently about living in a small Texas town with her patient husband, their daughter, and an ever-growing collection of quirky taxidermy. She frequently writes about her experiences with depression, anxiety, and avoidant personality disorder. FURIOUSLY HAPPY is my favorite of her books, but I also love her first memoir LET’S PRETEND THIS NEVER HAPPENED and YOU ARE HERE, a coloring book of the illustrations she creates in moments of anxiety. 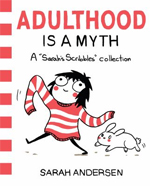 ADULTHOOD IS A MYTH
By Sarah Andersen
(2016)

This is a book you could easily read in an hour or two. Sarah Andersen, who also gained a following online (I’m sensing a theme here), creates comics about life as a Millennial adult. In simple drawings, she depicts social anxiety, body image struggles, insecurity, and how pets make it all a bit better. 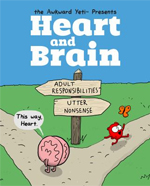 HEART AND BRAIN: AN AWKWARD YETI COLLECTION
By Nick Seluk
(2015)

Nick Seluck is another webcomic creator who eventually became a published author. He is best known for comics depicting inner turmoil between logical Brain and fanciful Heart, as well as various other organs (I have a soft spot for the adorable Gallbladder). I’ve especially enjoyed his comics about anxiety and insomnia. 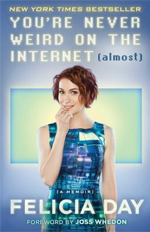 Felicia Day’s life has been an unusual one. Homeschooled as a child, she went to college at sixteen, finished her math degree with flying colors, and then became an actress and web-series developer. She writes about anxiety, depression, and the intense gaming addiction she developed in her twenties.

YOU’RE NEVER WEIRD ON THE INTERNET is easily the funniest celebrity memoir I’ve ever read (and I’ve read an embarrassing number of celebrity memoirs). Day’s narration of the audiobook is especially hysterical.