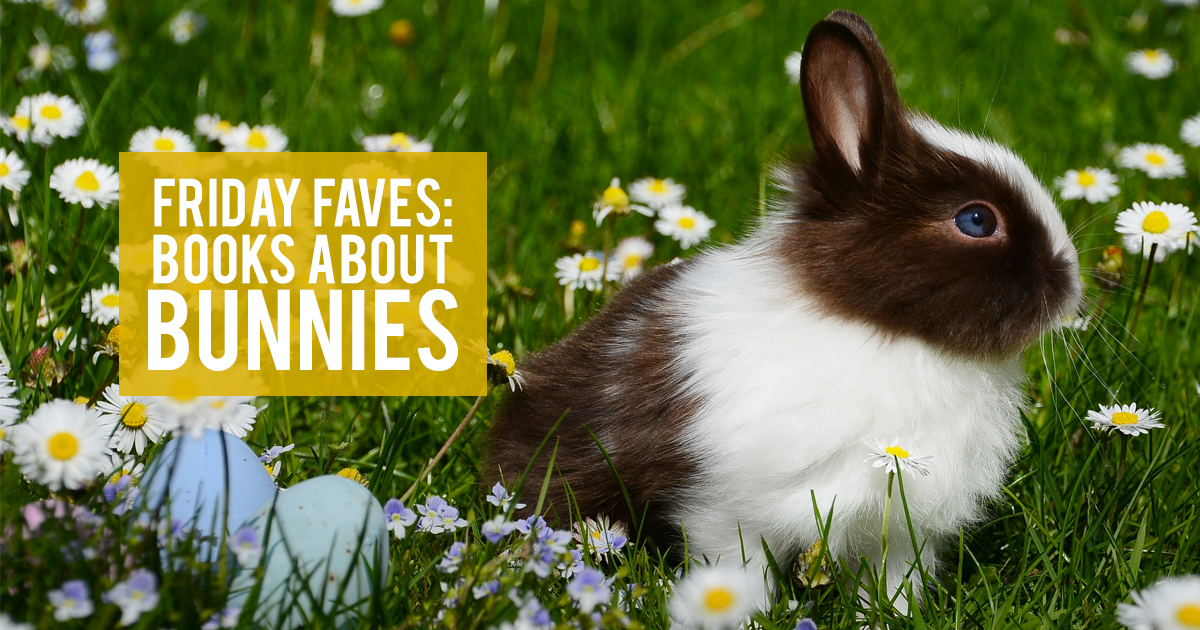 It is spring! That means my thoughts turn to flowers, rain showers, and cute little animals. One of which that I often associate with spring is a bunny rabbit. Granted, this may be due to the fact that Easter and Easter Bunnies are also associated with spring in my mind…and little bunnies and chicks often are scattered around the retail world at this time of year. But regardless, this season makes me think of bunnies. And there are so many great bunny books for little kiddos! Here are five of my favorites. 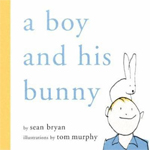 A Boy and His Bunny
by Sean Bryan. Illustrated by Tom Murphy

This is an odd book. But I like it. (Hopefully the fact that it is odd and I like it doesn’t necessarily mean that I am odd…hmm. I guess I should think about that. But don’t judge me, okay?) So the premise of the book is that one day a boy wakes up and there is a bunny on his head. He goes throughout his day with a bunny on his head. There are loads of rhymes in the book. And kids will laugh at the way the boy doesn’t find it unusual or crazy that there is a bunny on his head. Basically this is just a fun way to look at what in life is odd and what isn’t. And it is kind of amusing to think that a boy wouldn’t mind having a bunny stuck on his head. (And truth be told, I would rather have a bunny than what the book reveals his sister has stuck on her head…) 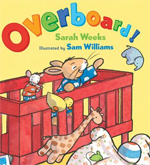 This is one of my all-time favorite books to read to babies. This little bunny does what all little ones like doing…learning how gravity works by dropping things on purpose. All the baby things go “Overboard!” Things such as diapers, jammies, food, baby wipes—they all get dropped to the little bunny’s delight. And little ones can say “overboard” with nearly every page turn. This is a cute little story where the bunny is an adorable toddler. Such fun. 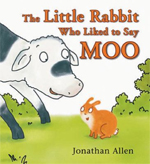 The Little Rabbit Who Liked to Say Moo
by Jonathan Allen

Have you ever heard a toddler giggle because they get that something isn’t quite right in a story? Or have you ever had a preschooler gleefully explain why a picture book’s story is a little bit silly? This is one of those books that have had both of these responses. Basically there is a little rabbit that is in a farmer’s field and the rabbit says “moo” over and over again. Of course this catches the attention of a cow who promptly informs the rabbit that “moo” is just not what rabbits say. Thus begins a journey of farmyard onomatopoeia that will give toddlers and preschoolers something to giggle over. And seriously, who doesn’t like reading a good picture book where the characters say the wrong sounds every now and again? 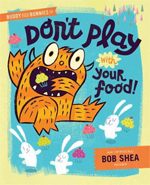 Buddy and the Bunnies in Don’t Play With Your Food!
by Bob Shea

I love Bob Shea books! And this one is one of my favorites. Basically there is this monster who is not nice (although his name is “Buddy” so readers may suspect that whoever named him would know that he has the potential to be nice and be a “buddy” to other animals). Anyway, this mean monster finds three bunnies and decides that they will make a perfect meal. Only, the bunnies trick Buddy into waiting to eat them until after they make cupcakes. Of course after gorging himself on cupcakes, Buddy decides to eat the bunnies another day. And thus begins the delicate trickster story tripe that leads Buddy to realize that maybe he shouldn’t eat his “friends.” Seriously, this book makes me laugh (and bonus that I have a little nephew who loves the book as well). So, pull up a cupcake and enjoy this monster/bunny book yourself.

That Rabbit Belongs to Emily Brown
by Cressida Cowell. Illustrated by Neal Layton

This book is quite special. When I first read it I knew that this was a book I wanted to remember so that I could read it again when I needed to remember important things like what makes toys REAL. And any book that sticks like this one does in my “I must remember this for all time” memory often is a book that I tend to want to tell other people about (such as recommending it to you all via this blog post)! Basically there is a girl named Emily Brown that has a stuffed rabbit (named Stanley). Emily loves her bunny and they have all sorts of adventures together (as any respectable girl and her favorite toy would have). However, one day Emily finds out that the Queen wants Stanley in exchange for another toy. Emily says “no” and continues her adventures. But the Queen will not take “no” for an answer! And eventually Emily must let the Queen know (in no uncertain terms) just how important Stanley is to her. Seriously, this is a good book for all the little kiddos who believe that toys are as real as people. And really, maybe after reading this story people will understand that indeed they are.