Book Characters That Should Be Friends - Part Two 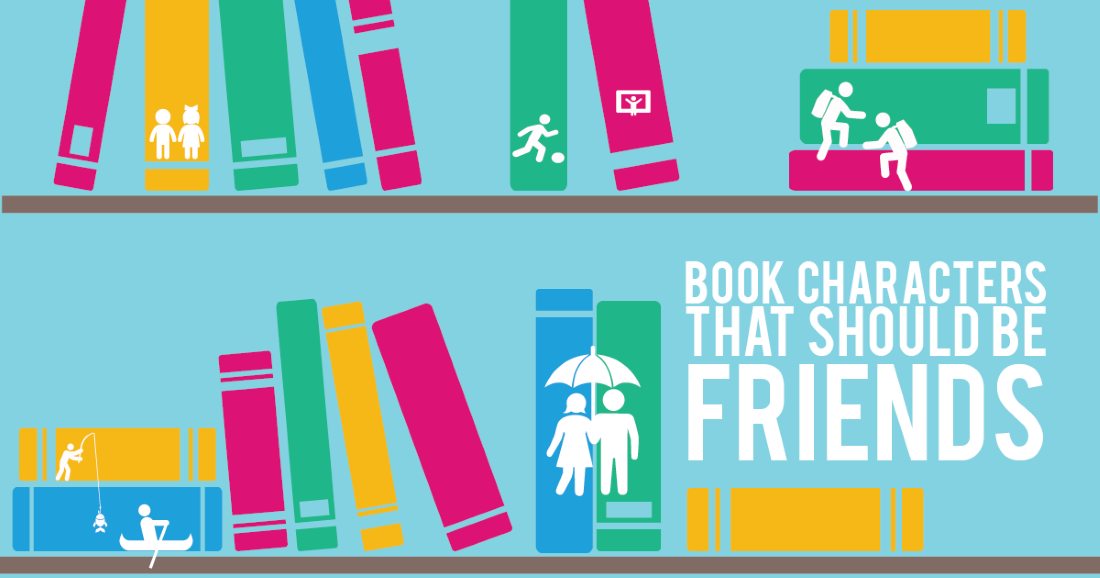 Do you know of any book characters that you think should be friends? 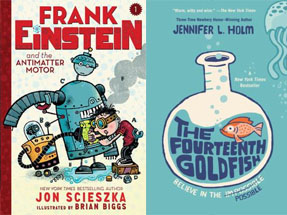 Frank Einstein is a scientist who loves inventing things. He is somewhat of a mixture of Albert Einstein and Frankenstein. Frank works tirelessly on science project after science project. And he also saves the world on the side. Grandpa from THE FOURTEENTH GOLDFISH is also quite a scientist. He has invented a way to become “young” again. Grandpa Melvin might be a bad teenager this go-round, but he still loves science and family (which makes me think that he would have no problem becoming friends with Frank Einstein as he journeys to becoming one of the greatest kid inventors and scientists of all time—as long as they both didn’t want to invent the same things…). The only thing I wonder is, who would become the better scientist—Frank or Grandpa Melvin?

I don’t know if these two characters will actually get along—because they are the most moody birds I have ever read about! However, they both are fowls that have very deep (and dramatic) feelings. The Pigeon wants to drive a bus, have a puppy, eat a cookie, and not go to bed or take a bath. And he tends to have a tantrum around page 20 or so. Grumpy Bird is quite grumpy (and in the sequel is pretty hungry!). Grumpy Bird doesn’t know how to show his feelings, especially when his friends are trying to copy him. And this leads to a bit of a tantrum for Grumpy Bird as well. Seriously, these two birds could be friends—or at least theoretical friends. 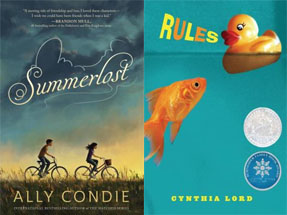 Cedar Lee from the book SUMMERLOST by Ally Condie is trying to figure out her life after a horrible accident killed her dad and younger brother, Ben. Cedar struggles with the mixed feelings of missing her family and being relieved that Ben (who was somewhere on the autistic scale) isn’t around to frustrate her. Catherine from the book RULES by Cynthia Lord also has an autistic brother. Catherine is often frustrated by the complexity of her family dynamic; however, Catherine fiercely loves her brother. I believe that if Cedar and Catherine were living in the same neighborhood (or the same book), they would have been friends. They would have so much to talk about: from the frustrations, challenges, and joys of being a big sister to an autistic brother to life, love and all that is in-between. Seriously, these two book characters should be friends. 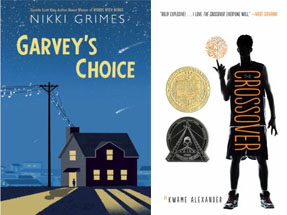 In the book GARVEY’S CHOICE by Nikki Grimes, Garvey is told by his father that he should participate in sports. Garvey doesn’t actually like sports (he totally rocks at singing), but he does want to please his father. He comes from a great family that cares about each other. (His sister even distracts their dad when she knows Garvey needs a distraction, and Garvey’s mom is often seen trying to help the dad figure out what is important to Garvey.) Josh Bell, on the other hand, is the star of his basketball team (with his brother Jordan) in the book THE CROSSOVER by Kwame Alexander. Josh is trying to figure out who he is through both basketball and poetry. Josh also comes from a great family. His mom and dad are ultra-supportive. And even though Josh doesn’t always get along with his brother, Jordan, they are a good support (overall) to each other. Both Garvey and Josh have dads who love sports. They both have good families. Basically, they could be the type of people who could be friends if they went to the same school. And I think these two would be a good balance of perspective for each other. So, it may be a little bit of a stretch, but I think these two characters could really be quite good friends. 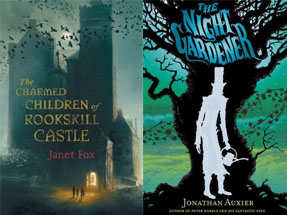 In THE CHARMED CHILDREN OF ROOKSILL CASTLE by Janet S. Fox, Katherine, Robbie, and Amelie have to figure out why so many children are disappearing at the boarding school where they stay during the London Blitz. In THE NIGHT GARDENER by Jonathan Auxier, Molly and Kip are two orphans who have to earn their keep while staying away from a sinister evil that stalks them and their household at night. In both of these children’s horror stories the kids have to solve the mystery of what is happening before they become the next victims of the evil. Both take place in out-of-the-way grand English country homes, and all of these kids (though especially Katherine and Molly) show a lot of grit, pluck, and determination. Seriously, I bet these characters could sit together around a camp fire in the summer and swap scary stories…and then laugh over the similarities of it all. Then they might go out and save the world from another evil together. Yeah, they totally would be friends!