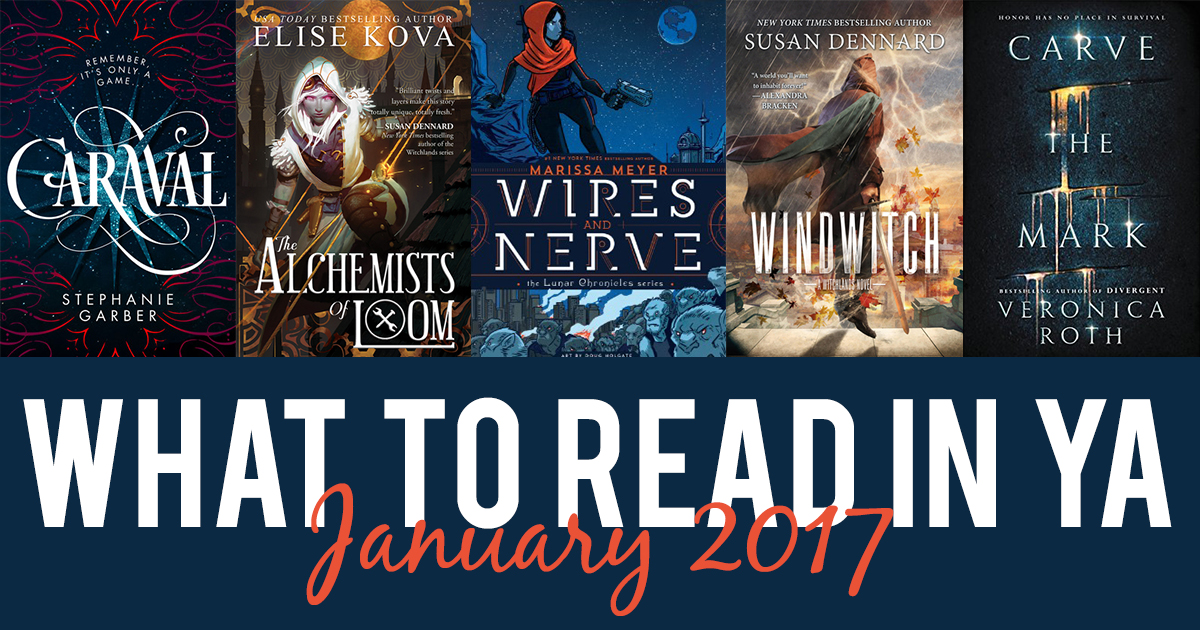 I am excited that it’s a new year and that there are a lot more new YA releases in January! There are a plethora of fantasy novels in particular by both debut and established authors coming out this month that I can’t wait to try.

This book about Caraval, an annual magic show which includes the audience as participants, promises to exceed the demands of its lofty premise.

Believing that she will never be allowed to participate in the annual Caraval performance when her ruthless father arranges her marriage, Scarlett receives the invitation she has always dreamed of before her sister, Tella, is kidnapped by the show's mastermind organizer.

THE ALCHEMISTS OF LOOM
by Elise Kova
(January 3)

This high fantasy/steampunk novel is a breath of fresh air in the prominently fantasy-light YA market. The world-building alone between the Dragon King and the five guilds promises to be worth your time.

Engineer turned organ thief Arianna fights against her world’s Dragon oppressors with her magical skills and unscrupulous morals. Before she can slaughter a wounded Dragon during a routine heist, he offers her a wish of her greatest desire, if she brings him to the only Guild standing against the Dragon King. What should be a simple airship ride across the world is quickly filled with assassins, monsters, and a rebellion that exposes Arianna’s deepest secrets.

I loved Meyer’s Lunar Chronicles, and I like graphic novels, so this is a no-brainer. The fact that Iko finally gets her own book is icing on the cake! I CAN. NOT. WAIT.

When rogue packs of wolf-hybrid soldiers threaten the tenuous peace alliance between Earth and Luna, Iko takes it upon herself to hunt down the soldiers' leader. She is soon working with a handsome royal guard who forces her to question everything she knows about love, loyalty, and her own humanity. With appearances by Cinder and the rest of the Rampion crew, this is a must-have for fans of the bestselling series.

A sequel that lives up to a strong first book? Count me on that bandwagon. There isn’t a better time to pick up this fantasy series about witches.

After a surprise attack and shipwreck, Safi and the Empress of Marstok barely escape with their lives. Alone in a land of pirates, every moment balances on a knife’s edge—especially when the pirates’ next move could unleash war upon the Witchlands.

With even better chemistry and notably developed writing, fans of the Divergent series are sure to devour Roth’s newest sci-fi novel.

Living on a violent planet where everyone develops a unique power meant to shape the future, Akos and Cyra, youths from enemy nations, resent gifts that render them vulnerable to others' control before they become unlikely survival partners.

Be sure not to miss…

Find these and other brand new YA titles in the Teen Corner in the First Floor Reference Wing!