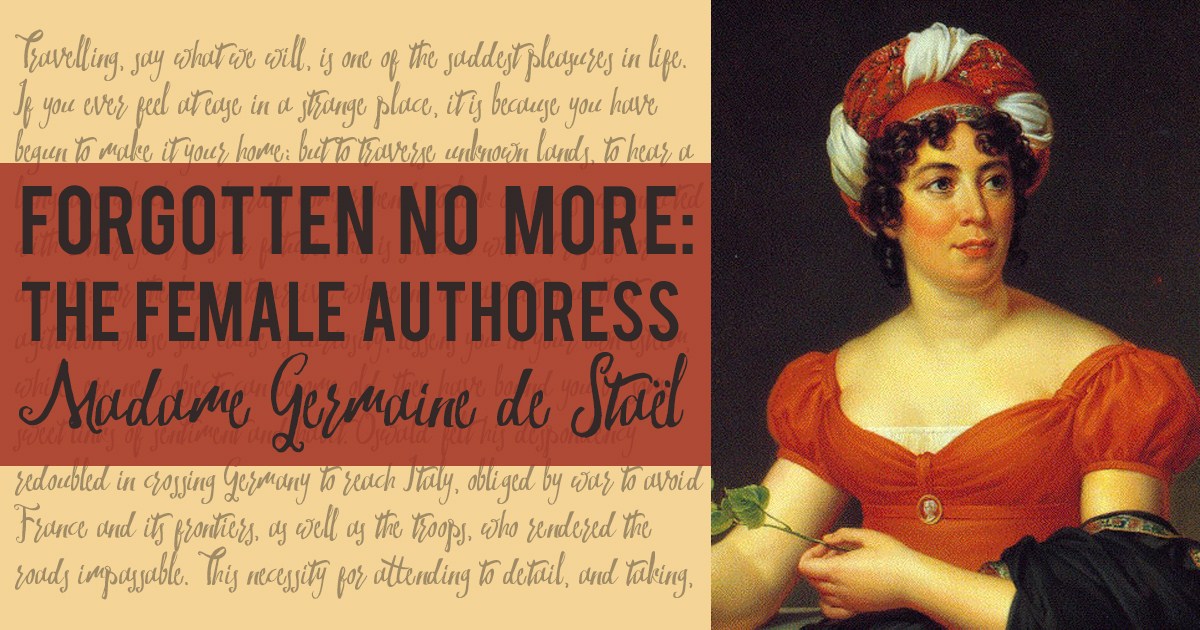 Anyone heard of the great Romanticism authors Lord Byron or Johann Wolfgang von Goethe? How about Romanticism painters like J.M. William Turner or Caspar David Friedrich? What about Romanticism musicians like Schubert, Liszt or Beethoven? Probably a resounding YES to all of those famous and talented men who are considered geniuses in their fields because they pushed boundaries and invented new techniques and ideas in their art. Romanticism is not about being lovey-dovey romantic at all, but more about the power and majesty of man in relation to the awe-inspiring grandeur of the natural world. To be considered a genius your artistic creations have to build off the established to produce new definitions of what is great. We should continue to give kudos to all artistic geniuses where they are due! But let’s not forget the women during the same time period who can likewise be considered and especially those who establish women characters as geniuses.

Ever heard of the famous and talented authoress Madame Germaine de Staël? I’m not surprised if your answer is no. Napoleon Bonaparte really hated her so she was exiled from her beloved Paris, and unfortunately she was written out of the history books and out of literary anthologies (for the most part.) Her novel CORINNE, OR ITALY is one of my all time favorites so I was saddened, but not entirely shocked, to learn that the library didn’t own a copy. We now own a copy of CORINNE, OR ITALY (by Staël, Madame de (Anne-Louise-Germaine), 1766-1817., published 1805)- find it here!

Madame de Staël should be remembered and read because she was an influential writer and thinker, who proved that opposition can be inspiration. After being exiled from Paris, Staël set up a renowned and thriving salon in her home at Coppet, Switzerland. This became a locus for the great philosophical minds and writers of the Romanticism movement. Staël wrote novels, poems, philosophical treatises and started a female authorship trend that continued throughout the 1800s with great female authors like George Sand, Jane Austen, the Bronte sisters, George Eliot, Louisa May Alcott, Mary Elizabeth Braddon, Elizabeth Barrett Browning, Frances Hodgson Burnett, Emily Dickinson, Elizabeth Gaskell,  Anne Radcliffe, and Christina Rossetti, to name just a few. Staël’s bestselling novel CORINNE, OR ITALY, was a subtle critique of Napoleon’s oppressive regime as he passed civil codes restricting the freedoms women previously gained during the French revolution. This novel pushed a radical proposition that a woman could be a genius on the stage, anticipating the prima donna figure, while tying in autobiographical references. This novel should be read alongside other French literature classics as she helped establish the genre and tradition of great female authors.

Raise your hand if you’ve ever been dumped by someone you were head over heels for, where you thought it was totally perfect and you’d live happily ever after? Well (spoiler alert!) Corinne was dumped by Oswald. And then he chooses to marry Corinne’s much younger half-sister who couldn’t be more different than Corinne.  Completely distraught, she settles into a depressed melancholic state because of it… and then she overcomes the melancholy and helps teach and guide another talented young girl to take her place on the stage. Corinne’s voice and fire is not stolen by a small inconsequential man, but instead her voice is channeled into a matriarchal lineage of talented women. If there was ever a “how to get over a dumb man” novel, this is the ultimate classics edition. I happened to be fully immersed in Corinne studies when a similar break up happened to me and the irony was so apparent. I needed to pick myself back up and find my voice again. Staël’s work helped me be able to do so!

I respect and revere this female author and the way she set up future women’s writing achievements. She totally was a feminist in her day! Her novel CORINNE is a classic in my book and an overall great novel.