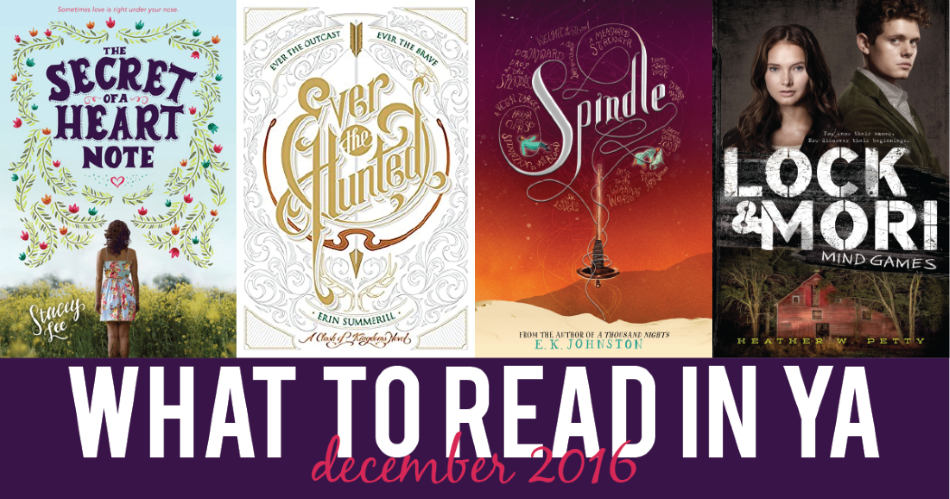 How can it be December already? I don’t know about you but I am still trying to read all the great October and November releases. December can be slower than the fall, but don’t write this year off yet! From Stacey Lee to E.K. Johnson, there are some exciting new YA releases coming to finish off the year. In order of the ones I am most excited about:

SECRET OF A HEART NOTE
by Stacey Lee
(December 27)

This fantasy debut from historical author Stacey Lee promises to be a funny and romantic coming-of-age story. I’ve wanted to try this author and this is more my cup-of-tea than her previous books.

As one of only two aromateurs left on the planet, sixteen-year-old Mimosa knows what her future holds: a lifetime of weeding, mixing love elixirs, and matchmaking—all while remaining incurably alone. For Mim, the rules are clear: falling in love would render her nose useless, taking away her one great talent. But when she accidentally gives an elixir to the wrong woman and has to rely on the lovesick woman’s son, the school soccer star, to help fix the situation, Mim quickly begins to realize that falling in love isn’t always a choice you can make.

EVER THE HUNTED
by Erin Summerhill
(December 27)

This is the first book in a new fantasy series by debut YA author Erin Summerhill and is said to be a page-turner and a true classic fantasy with a mission and warring kingdoms. I can’t wait! (plus, Erin will be at the Library on December 29 to talk about and sign her book).

Seventeen year-old Britta Flannery is at ease only in the woods with her dagger and bow. She spends her days tracking criminals alongside her father, the legendary bounty hunter for the King of Malam—that is, until her father is murdered. Now outcast and alone and having no rights to her father’s land or inheritance, she seeks refuge where she feels most safe: the Ever Woods. When Britta is caught poaching by the royal guard, instead of facing the noose she is offered a deal: her freedom in exchange for her father’s killer.

This beautifully written, rich retelling of Sleeping Beauty is the second book in the Thousand Nights series but the two books do not need to be read in order of publication. This is perfect for me, because this is the retelling that is calling my name.

It has been generations since the Storyteller Queen drove the demon out of her husband and saved her country from fire and blood. Through years of careful manipulation, a demon has regained her power. She has made one kingdom strong and brought the other to its knees, waiting for the perfect moment to strike. When a princess is born, the demon is ready with the final blow: a curse that will cost the princess her very soul, or force her to destroy her own people to save her life.

This modern-day Sherlock Holmes trilogy offers complex whodunit mysteries and a fast pace, perfect for fans of the hit BBC television series. After reading the Sherlock-inspired Every series by Ellie Marney, I’ve needed a book to fill the Sherlock-shaped void in my life.

Mori’s abusive father is behind bars…and she has never felt less safe. Threatening letters have started appearing on her doorstep, and the police are receiving anonymous tips suggesting that Mori—not her father—is the Regent’s Park killer. To make matters worse, the police are beginning to believe them. With the clock ticking, Mori will discover just how far she is willing to go to make sure that justice is served, and no one—not even Lock—will be able to stop her.

Be sure not to miss…

RULES OF THE GAME (Endgame #3) by James Frey

Find these and other brand new YA titles in the Teen Corner in the First Floor Reference Wing!